Another Word: The Words We Carry

When I was a kid, I carried around universes in a cardboard box.

My universes were heavy. But I was lucky. They all fit inside that box, even if their numbers kept expanding.

My universes were small. Like a certain famous British police box, they were bigger on the inside than on the outside. Way bigger. In fact, they were limited only by the imaginations of their creators.

My universes were books. I carried them around in a cardboard box because, when I was a kid, my family and I were always trying to keep one step ahead of an angry landlord, or an eviction notice, or simply, the street.

I grew up poor, and I grew up loving fantasy and science fiction. This shouldn’t seem remarkable, yet it is. Most of the kids I knew who liked SFF were well-off—comfortably middle-class at the very worst. Meanwhile, most of the kids who came from my side of the tracks did everything they could to avoid the taint of geekery. Being a geek meant being weak, and when you’re poor, being tough—or feigning toughness—is one of the first survival strategies you learn.

When it came to being tough, I was a failure. The best I could muster was aloofness. Then again, it’s easy being alone when you love being alone—especially alone with a book. Or a whole box of them.

Reading SFF didn’t curb my loneliness. Nor was it an escape. It’s easy to paint SFF, and its fans, as escapism addicts. I grew up around real addicts. It’s not the same. When I first read my uncle’s dusty copy of Stephen R. Donaldson’s brutal, morally murky Lord Foul’s Bane at the age of eleven, I didn’t escape my situation any more than the book’s leprous antihero, Thomas Covenant, escaped his when he crossed over from modern-day Earth to the fantastic realm known as the Land. By the age of eleven, I’d already witnessed plenty of horrible things in real life, from nervous breakdowns to drunken destruction to domestic violence. Lord Foul’s Bane only reminded me of them—and of the alienation, confusion, and rage that often come when kids, precocious or otherwise, are trapped in poverty.

Not all the books I read fueled that darkness. For every Lord Foul’s Bane in my cardboard box there was a disintegrating, secondhand copy of Dragonriders of Pern. Pern isn’t bright and happy—Anne McCaffrey was never strictly that—but compared to Donaldson, her work is more balanced and open to the notion of heroism. Again, though, there is no escapism.

Lessa, the heroine of Dragonflight, is caught in a caste system. Born noble, she’s orphaned then forced to disguise herself as a menial drudge. As clichéd as that trope seems now, it captivated me. I wasn’t a noble, but I could relate. Growing up in an unstable, alcoholic family that struggled to stay clothed, sheltered, and fed, I knew how subtly yet insidiously people could be treated according to where they fell in the economic hierarchy.

Looking back, it doesn’t surprise me that I grew more intrigued by the Holdless, the lowest class on Pern, than I was by the dragonriding Weyrfolk. Lessa was an excellent character, but why did she have to be a royal reclaiming her birthright? Why couldn’t she have been born a drudge? Why couldn’t she be someone who fought her way upward without that inner assurance of entitlement?

There has been a call lately for more poor protagonists in SFF. I couldn’t agree more. But it’s just as much a matter of quality as quantity. Even with the unlimited scope and imaginative prerogative at the fingertips of the SFF writer, one outlandish concept still eludes most of them: that poor people might possibly see themselves, and reality, differently than those who have never gone homeless or hungry—and that such an outlook might lead to an entirely different kind of heroism.

Some have done so beautifully. Nalo Hopkinson’s Brown Girl in the Ring immediately springs to mind, as does Nick Mamatas’s latest novel Love Is the Law. Each acknowledges and addresses poverty in a way that’s both integral to the story and unique to the author’s voice. Neither panders. Neither excludes.

It’s not that SFF isn’t rife with poor protagonists. Woebegone serfs and dystopian proles litter the genre-scape, and the heroes among them are often the ones who feel contempt for their poorness. The problem lies in many authors’ inability or unwillingness to portray their poor protagonists as anything other than middle-class people—with middle-class views of self and society—who simply wear tattered clothes and have a chip on their shoulders.

Oh, that chip. As a kid, I was angry. There were times that I went hungry. There were also times that my family was homeless—and if it weren’t for the kindness of near strangers, we might not have made it. When you’re a kid, and this is all you’ve ever known, you’re not driven by ambition or redemption or revenge or any other kind of dramatic agency. You’re driven by survival, except for the times when even survival seems like a luxury that maybe you don’t even really deserve. But for every flash of anger and envy that I felt, I was gripped by other things. Fear. Excitement. Curiosity. Pensiveness. Desperation. Determination. Even, at the worst of times, a perverse sense of self-sabotage.

These are the kinds of conflicts, both internal and external, that I still crave to see more in SFF. It isn’t an issue of economic justice, although I’d be lying if I said I wasn’t deeply concerned about that. It’s an issue of richness—the kind that has nothing to do with riches. Some positive steps have taken, like the new grant being launched by the Speculative Literary Foundation to catalyze diversity within the ranks of upcoming SFF writers. It’s a start. More writers from disadvantaged backgrounds should be encouraged to write SFF. And when they do, they should be encouraged to write from that experience rather than expected to act like Lessa in reverse—a poor kid hewing to middle-class sensibilities for the sake of a genre that, on the whole, does not return the favor.

I’ll never fully realize just how much all those books in my cardboard box helped me cope. They kept a poor, hungry, lonely kid occupied. And focused. And ever questioning. I can only guess what those books would have accomplished if people like me had actually been in them.

When I wish for more economic diversity in SFF, I’m not concerned about the health of genre fiction as a whole. I’m selfish like that. I want more of those books for me. More precisely, I want the younger versions of me to be able to go to a library sale, a secondhand bookstore, or a generous uncle and find more SFF books that understand what it means to be poor. Books that say there’s no shame in growing up poor. Books that show how SFF has the ability, as no other literature does, of illuminating the human condition of being poor—the good and the bad.

I will always carry that box of books around with me. Not literally, of course. My bookshelves are now overflowing, if no less dusty. Thankfully I’ve managed to get to a point where I almost always know where my next meal is coming from and where I’ll be laying my head that night. But I still carry around that same sense of wonder, and that same sense of frustration, that I did when I was a kid.

Jason Heller is the author of the nonfiction book Strange Stars: David Bowie, Pop Music, and the Decade Sci-Fi Exploded (Melville House). He's also a former nonfiction editor of Clarkesworld; as part of the magazine's 2012 editorial team, he received a Hugo Award. He wrote the alt-history novel Taft 2012 (Quirk Books), and his fiction has appeared in Apex Magazine, Farrago's Wainscot, Swords v. Cthulhu, and others; his nonfiction has appeared in The New Yorker, The Atlantic, Rolling Stone, Pitchfork, Entertainment Weekly, Weird Tales, Tor.com, and Ann and Jeff VanderMeer's The Time Traveler's Almanac. He regularly reviews science fiction and fantasy novels for NPR.org, and he's the co-editor of the fiction anthologies Cyber World (with Josh Viola) and Mechanical Animals (with Selena Chambers), both for Hex Publishers. Jason lives in Denver with his wife Angie and plays in the post-punk band Weathered Statues, and he can be found on Twitter: @jason_m_heller. 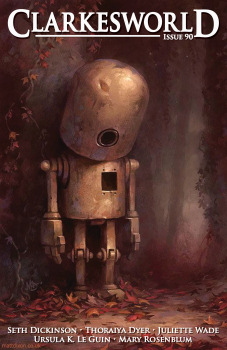