Another Word: A Shed of One's Own

I am writing this article right now whilst ensconced in the warm embrace of a shed.

I get it. Shed does not sound appealing. It conjures a certain image: a lawn mower, a snow blower, a gasoline smell, mouse poop.

It sounds like a place one might be banished to—a punitive measure for having done something wrong. “You’re stinking up the joint with your WORD FUMES,” my wife might say. “To the shed with you! With the mice and the mowers!” And then I would stumble the long march across the hoarfrost lawn to the shed where I would toil away the hours with blister-making, callus-having wordsmithy. Rattling shovels and letting spiders weave webs in my hair.

I am not writing this from that shed.

Rather, I am writing from a whole different shed.

I am writing from my writing shed.

Let’s step back a moment.

A writer must do one thing above all else, and that is: to write.

That, of course, is easier said than done. I might as well have said, “A writer must do one thing above all else, and that is: to wrestle four grizzly bears into submission.”

To write, other things must fall into place.

A writer must have:

Meaning, you have to be able to snatch time away from the jaws of the same time-consuming beast that attacks us all, and you must also secure some place somewhere to actually sit and write. You can’t do it all in your head. Not yet, at least (the technology hasn’t caught up to the psychic dimension).

Time management is a whole issue all its own and instead, I’d like to talk about place. Whether you use a notebook or a laptop computer, whether you sit at a desktop or carve your manifestos into the back of a captive UPS man, whether you sit on a Bosu ball or stand at a treadmill desk, you must find the literal, physical space to commit your wordsmithy.

And it’s not just about having the space. It’s about having a protected, special space. A space without intrusion from others. A place suited to the ideation and creation of the work you want to commit to paper and screen.

That brings us to: the shed.

I’ve been a writer for—

Too many years, now. I freelanced for over ten years, and I’ve been writing novels for the last few. All the while, I’ve been afforded some manner of office inside the walls of our home. An office with a desk, a computer, bookshelves, and whatever else I felt was necessary to get the story juices flowing (at various points: snacks, liquor, coffee, Star Wars toys, pens, ninja weapons, coffee). It’s been wonderful. I’ve been very lucky. I had a place to call my own. Not a big space. I couldn’t drive a Segway around it to clear my head. No hang-gliding amongst its rafters.

But I had four walls and a ceiling and a light and it was mine.

Then, not quite four years ago, this thing happened. An event.

A cataclysm, of sorts.

We were suddenly host to this thing known as a “human child.”

It came from my wife, though if I’m to understand the biology, I too am equally responsible. Whoever created this thing, he’s here. He’s on this planet. And we are his caretakers despite not having signed up specifically for this task.

He’s wonderful. We love him dearly. The boy is a ball of kooky, kinetic energy.

One day they stay where you plop them.

Next thing you know, they’re running around your house at top speed like a coyote on bath salts.

Now, being a writer is a fairly intellectual pursuit. I sit still most days like some kind of crafty fungus, and my fingers do most of the moving, and they do that moving in order to translate the pure, unfiltered story in my mind onto the screen. Doing that takes a lot of concentration. Mental energy and effort. You gotta sit down, focus up, and use that brain-bucket to make thinky-thinky.

Ah, but having the drug-addled coyote running around?

My wife can only do so much to wrangle a three-year-old. He’s like a zombie attack, that kid. Just when you think you’re safe—the doorknob is rattling, someone is moaning on the other side of the wall, and little fingers are grabbing underneath the door in the hopes of grabbing you and dragging you out of the safety of your room. Just as I’d start to get into a groove with my work—

Always welcome! Always sweet! He’d come in and want hugs and want to play or want to tell me some completely absurd story he just made up. It was nice.

And it was hell on my productivity.

I had deadlines, damnit.

They call them deadlines because if you don’t meet ‘em? You’re dead.

So, my wife and I sat down and said, something must be done.

We considered putting the child in a box marked FREE PANDA and putting it out on the curb, but turns out? That’s illegal. (Stupid government.) Since exile for the human child would not be an option, I would be the one to take exile.

Various ideas were bandied about. Rent an office? Refurbish a part of the house where I could hide away like some freakish uncle everyone thinks is in prison?

Or, seize upon the trend of: studio office sheds.

We talked to some local Amish shed-builders and it turns out, you can get one built and have it fitted for things like: electricity! And HVAC! And whiskey dispensers!

That’s what we did, and now here I am, writing this article from the writing shed. A place I sometimes call “the Mystery Box,” though a Facebook friend online came up with the name “the Myth Lab,” which is probably much cooler if there wasn’t a risk my son would go to school one day and tell his teacher “Daddy works in a Myth Lab,” but of course they wouldn’t hear Myth Lab, and suddenly everyone would think my son’s father was some Heisenberg variant making meth in a shed.

You probably don’t have a shed.

You may never have a writing shed. I never expected to need one or have one.

What you will need, and what I want you to think very hard about, is finding a place to call your own.

I want you to find this place somewhere in your life. It can be in public, though it’s much better it is space you legitimately own and control. You cannot own that corner of Starbucks, much as you want to. You cannot own that park bench or guarantee its use every time you pass by it.

This is your idea chamber.

This is your worldbuilding, wordbuilding realm.

This is your land and you are the deity that presides over it.

Maybe this is a room in your house. Or a desk in your bedroom. Or a laptop that you can set up at the kitchen table. Big or small, it is yours.

Now: I want you to protect this space with tooth and claw. Because part of being a writer is making writing a priority. If it’s not important to you, it won’t be important to anyone else. If it’s a thing that matters to you in your heart, sometimes you need to make it matter outside in reality. You need to tell people in your life:

This is my space.

For a period of time, I require this space to do what matters to me.

Protect the time you have to use it.

Since entering the shed, my productivity has gone way up.

I write a lot more now.

I find this is true any time I take what I do more seriously.

If I give my writing its priority, then my writing returns to me with productivity.

Do the same for yourself.

Shed or no shed, find your place.

And no, you can’t have my shed. Get your own space, weirdo.

Chuck Wendig is a novelist, screenwriter and game designer. He's the author of many published novels, including but not limited to: Blackbirds, Atlanta Burns, Zer0es, and the YA Heartland series. He is co-writer of the short film Pandemic and the Emmy-nominated digital narrative Collapsus. Wendig has contributed over two million words to the game industry. He is also well known for his profane-yet-practical advice to writers, which he dispenses at his blog, terribleminds.com, and through several popular e-books, including The Kick-Ass Writer, published by Writers Digest. He currently lives in the forests of Pennsyltucky with wife, tiny human, and red dog. 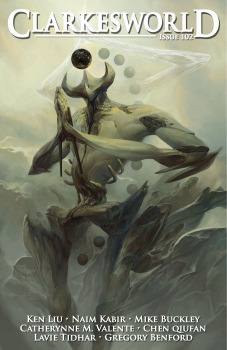