Another Word: How to Clothe a Character, Using Only Star Wars References

What your characters are wearing matters. Of course, as a writer/artist/designer, you already know this is important. No one in an age of merchandising as intense as this one doubts the importance of character design. Your Sith Lord needs to be memorable; with any luck, they’ll be a hummus appetizer someday!

By now, a century of cinema and the omnipresence of television has made all of us very aware of the nature and importance of costume. From Flash Gordon to samurai flicks (both of which count as Star Wars references), costumes provide visual impact, illuminate character, build a world, and give you a chance to tempt cosplayers to your shores. And some of the most iconic and most frustrating movie costumes of the last fifty years come from the same vaguely-smothering franchise. So here are some tips for clothing your characters, thanks to a galaxy far, far away.

Your character should be in a costume suited to them, as distinctive as possible while still being a believable part of the surroundings. The original film relied on simple silhouettes, largely because the bulk of the budget went into scale models and “pew pew” noises. As it turns out, this has worked immensely better than anything more deliberate could have; the vaguely gritty, lived-in style of the production design meant the clothes were both instantly recognizable as character notes and easy to replicate at home, an early instance of Accidental Cosplay Gold. Did you have access to a nearby martial-arts supply store? You had Luke in the bag. (There’s a reason that when he came back with saber blazing in Return of the Jedi, the belted-tunic silhouette was almost identical even though the color and layers had changed. That shape was Luke’s calling card; that awkward little peplum was just a part of him by then.)

As a response to the rural and military settings of the first movies, one of the biggest stylistic deviations the prequels made was to go all in on lavish costumes for its royal heroine—technically to set the films apart from their predecessors, though it ended up being a fairly smart choice on several levels, given that the costumes were one of the few things in the prequels not CGIed in later. (Though by the time Padmé was hauling three steamer trunks’ worth of heavily-embroidered separates into the Tatooine desert, everyone probably regretted it.)

But nobody in your work gets dressed in a vacuum; characters’ clothes relate to one another. Poe’s jacket in The Force Awakens becomes a thread that visually binds everyone who wears it to the Resistance one by one: after he loses it, Finn takes it up, and eventually loans it to Rey, as they accept their new roles. We know Rey and Kylo Ren share some connection before they ever actually make their creeper Force bond, just because their sleeves are horizontally segmented mummy wraps, and their long sleeveless overlayers preclude any semblance of the Jedi silhouette while looking both oppositional and parallel in a fight scene. (Imagine Rey fighting Hux or Phasma—doesn’t look nearly as balanced.)

And Sabe, the Naboo Queen’s decoy in The Phantom Menace who wore royal costumes designed to anonymize the monarch—perhaps the only good move any of the prequels made, because it very nearly tricked you into wanting to see parts of it again despite already knowing it was the worst movie ever assembled by the kind of people who would, eventually, agree to let Disney make hummus out of their villain.

Draw from history. There’s hundreds of years of costume nerds who came before you, and we have records of their great works; every detail of how clothes are made counts as worldbuilding. (Sumptuary laws—wardrobe restrictions issued by monarchs and government officials—are some of the most fascinating pieces of legislation that remain to us; seeing official decrees about who could wear what single-handedly addressed class fears, xenophobia, economics, and gender roles.) And historical garments can, frankly, act as gimmes for some amazing stuff.

If I wasn’t doing an entire article using only Star Wars references, I would point out that an evening dress in the Met Museum’s costume collection was the direct inspiration for Lucille’s unforgettably Gothic Spine Gown in Crimson Peak. However, I am only using Star Wars references, so we’ll go ahead and use Padmé Amidala, whose wardrobe was a sartorial reflection of ludicrous wealth so over the top that the prequels may have actually been a nine hour propaganda video condemning capitalism and we just didn’t notice because we were so distracted by the physics of her hair.

Historical clothes have important connotations that we recognize even when the silhouette is taken out of chronological context, which can make them an incredible shortcut to mood and character. It’s not an accident that Padmé’s action gear in Phantom Menace looks suspiciously like an eighteenth century highwayman’s frock coat. It’s not an accident that her Loyalist Senate gown in Attack of the Clones looks suspiciously Elizabethan-Parliament, with its stiffened-hourglass skirts and solemn overgown. It’s definitely not an accident that her dress for her inexplicable secret wedding to the galaxy’s worst young man just before he causes a galactic fracas lifts heavily from pre-World-War-I wedding gowns. Moment to moment, each of these costumes did exactly what they needed to do. Moment to moment, they make sense.

But be careful about appropriation. Historical silhouettes often maintain their power outside of chronological context, but lifting from another cultural context is a lot more fraught. If you don’t know what it means, transporting it is an iffy business. This doesn’t mean you can never borrow a design element; if you want some vaguely-square drapey sleeves for your character, no one’s stopping you. It does, however, mean that perhaps when you’re assembling a royal gown for your young queen who’s from a far-off space planet, maybe you’d like to avoid lifting the court attire of Mongolian royalty wholesale. (Is it visually striking? Certainly. Does it accidentally serve to Other the culture you’re borrowing from if you take the visuals without transposing any of the attendant cultural history? It does. Unless you’re actually presenting some spacefaring Mongolians, think twice.)

Also take into account the continuity of your character. Padmé’s clothes could, to some degree, be separated between the public and private sphere. Obviously the formal layers you wear in the Senate as the ex-tween elected monarch of a damask planet is a different approach than your home life, which is less about impressing galactic representatives than it is about deep connections with young, lustful Jedi who hate sand.

The high-neck drapery and complicated hairstyles of the former are politically symbolic, so naturally there will be contrast; will there be so much contrast between public and personal that Padmé would don a black leather bustier so her paramour can clearly see that no sand has taken root on her shoulders? I mean, if there is, more power to her, but when designing a character from scratch, the first victim to continuity of design is practicality. Usually a character’s wardrobe is more consistent than a normal person’s, because life is long and stories are, max, three movies and an animated season (and animators do not want to deal with new wardrobe every episode, thanks). If your characters’ wardrobes start looking like they’ve been assembled by six different people, make sure six different reasons are involved and you’re not just running away with the options. (I know Fashion Tumblr has a siren call; be strong.)

Leave the nonsense out. There is a lifetime’s worth of reading material defending the constant sartorial expression of female characters’ sexuality to tell us important things about how empowered and independent they are. It’s real cute, for certain values of cute. The women in your work should, of course, dress exactly how they please; if they all coincidentally choose to dress to please the kind of men who find the sexuality of female characters a deeply important thing to illustrate via maximum skin real estate for every occasion, then maybe that’s a sign. Nobody needs your version of Slave Leia. Literally nobody. Put it away.

Always have that person who gives no fucks. Sure, everyone can dress appropriately and it’s fine, but like a great setting makes a gem sparkle, you benefit from having one character a little outlandish even for the world you’ve created. If I wasn’t doing an entire article only using Star Wars references, I’d point out that Dawn from the Babysitter’s Club got at least a full manuscript page in every one of those books because she would, at a moment’s notice, wear three scrunchies and a pair of earrings made of Barbie telephones just to sit at home and think about babysitting.

However, I am only using Star Wars references, so we get Lando Calrissian, whose cape was not only lined in gold-threaded paisley, but had no means of even fastening. It potentially had hooks and eyes, but the circumference wouldn’t have allowed for Billy Dee Williams’ actual neck if he closed them, so that shit’s honestly just mocking the idea of performing the way a normal cape performs. Not only was it an iconic element of his silhouette, it was a recognizably dashing piece that borrows so much Musketeer flair you know everything you need to know about Lando the moment he shows up in it. (They give him another one later—it was just a part of him by then.) It stays on Lando’s shoulders because it loves him; in your world, too, someone should be this lucky. Bonus if it’s just outlandish enough that wearing it requires a sense of humor; you don’t see Lando Calrissian being made into hummus. 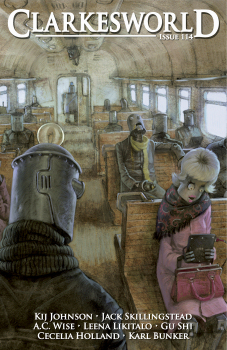