Another Word: Dear Speculative Fiction, I'm Glad We Had This Talk

I’m sitting down to have this conversation with you as a friend, as somebody who loves you. As somebody who’s devoted thirty-odd years of her life to you.

We’ve all made some mistakes. We’ve all had moments in our lives when we got a little self-important, maybe. Where our senses of humor failed us.

I’m as guilty as anyone of taking myself too seriously.

But for you, it’s become an addiction. You seem to think that nothing fun can have value; that only grimdark portentousness and dystopia mean anything. You wallow in human suffering and despair, and frankly—it makes me tired.

I remember when we were younger. You were so clever, so playful. So much fun. We had some good times. You could make me laugh and think at the same time. You made my pulse race.

But we got older and started understanding a little better how complicated the world is. How layered people’s motivations are. At first, you seemed to handle the moral complexity well. You’d give me something like The Forever War or The Left Hand of Darkness, and we could talk about it for hours.

I mean, I sensed your ambivalence. But I had some ambivalence of my own. That’s the thing about ambivalence—it’s a kind of tension. And tension drives a narrative, right?

And I don’t know if you got uncomfortable with the tension? Maybe you felt like you couldn’t live in limbo anymore, but you’d seen too much to believe in happy endings anymore. I’m guessing, I admit—but I wonder if you felt like had to find some way to resolve things. Get some closure. And escapism . . . just wasn’t open to you any more.

You started thinking you had to be cynical and mean to accomplish anything. You got wrapped up in your own history and your long-running arguments. You buried yourself in the seriousness of it all, and you forgot how to tell a joke. You even got—I hate to say it—kind of pretentious. Didactic, even.

The thing is, that kind of cynical pose is really just a juvenile reaction to the world not being what we hoped. We can’t have everything—so we reject anything. But it’s adolescent, darling, and most of us outgrow it. We realize that as much as the world can be a ball of dung, and horrible things can happen for no reason, there are positive outcomes too, sometimes. I’m not going to say things balance out, because of course they don’t—life is not fair—but it’s not just awful, either.

I’m not crying out for slapstick, here. You know that’s never done it for me. And I’m certainly not saying that I want you to be shallower.

If anything, I’m asking you to be deeper—to embrace more of the range of human experience. Not just the bad times. I mean, sure, we need to acknowledge the bad times, and I’ve deeply admired your recent willingness to explore new perspectives, to take on issues of race and gender and sexuality that once you would have shied from.

I have never doubted your courage.

But look at Terry Pratchett. (I know, we should all be Terry Pratchett. But then what would he read?) He manages to be incisive without being pretentious. He manages to be sharp and illuminating by being funny. Look at Neil Gaiman. Here’s a guy who can tackle some hard subjects and still have a good time. He makes people like him, and because they like him, they listen when he says hard, important things.

I almost hate to bring it up, but . . . J.K. Rowling? I know, you don’t take her seriously. She’s a woman, and she writes for kids, and in fairness some of the later books . . . could have used a closer encounter with the blue pencil. So it’s easy for you to dismiss her. But what you can’t dismiss is that she reaches people—and whether you agree with the way she discusses issues like class bigotry or not, the fact is, she does discuss them. Her awareness of them saturates her work, and it gets into people’s heads—because millions of people read her work.

I guess what I’m saying here is, look at Lenny Bruce. Look at George Carlin. The angrier they got, the less fun they got—and the less effective they got, because nobody wants to listen to an old man cat-yell at the kids on his lawn.

Oh, honey, I’m not saying you’re old. And I’m not leaving you. You’re a big part of my life, and I will always be here for you. I’m just trying to make sure that you’re always here for me, and sitting there in a toxic stew of your own bitterness . . . it’s not good for you. Look at you. When was the last time you left the house? When was the last time you read something because it was fun, not because you thought it was good for you?

Stern-lipped moral uprightness is not a literary value, darling. Sure, theme is. I’m not disputing that. But did you know that John Gardner talked about this thing he called “disPollyanna Syndrome?” He considered it a literary vice—the cynical fallacy that the real world is unrelievedly bleak—and he considered it as great a disservice to art as its opposite. And . . . he cited Harlan Ellison as a chief practitioner in this mode.

Oh, I heard you gasp. But the New Wave is one of the primary influences on the way we live our life and do our work today. And also, I hear you say, Harlan was popular! And funny!

Well, yes, he was funny. That’s why he got away with it. But you? I feel like all we have anymore is pus and severed limbs and the eschaton. And that’s not something we can build a future on, is it?

Kind of by definition.

I’m just saying that it’s right—and humane and morally correct—to harbor a deep and abiding concern for the world around you. And that it’s a perfectly normal—even laudable!—trait to express that concern and draw attention to problems by being savagely trenchant, witty, and sarcastic. Caustic, even. I want you to speak out. I want you to say what you mean.

But sometimes lately, spending time with you is like having my face pressed down into a trough of human misery until the bubbles stop.

You can have a sense of humor too. It’s okay. We’ll still like you. We’ll still take you seriously. We just think it’d be best for all of us if you could let yourself unbend just a little.

I know. It’s easier to get people to take you seriously when you’re all grit and pus and urban decay—or all gut wounds and bureaucratic incompetence, for that matter. It seems like a quick route to street cred. But the thing is, real people generally aren’t miserable all the time. Even in horrible situations, they find ways to take a little pleasure, to crack jokes. Dying people and homicide cops and soldiers are generally really funny.

I want us to have a little pleasure again too.

And maybe we’d have more friends if you weren’t such a downer to be around all the time.

Elizabeth Bear was born on the same day as Frodo and Bilbo Baggins, but in a different year. She is the Hugo, Sturgeon, Locus, and Campbell Award winning author of over 25 novels, most recently The Red-Stained Wings (Tor Books) and over a hundred short stories. She lives in Massachusetts with her partner, writer Scott Lynch, three adventurous cats, and an elderly and opinionated dog. 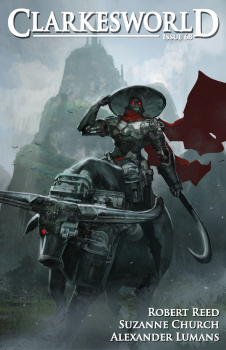