Another Word: The Exceptional Smurfette, or Being One of the Guys as a Superpower

This essay is a result of some thoughts that occurred during one of the weekly FeministSF chats on Twitter, when we were discussing exceptionality of female characters in urban fantasy novels—that is, their tendency to be the only woman in the book. This essay is meant to summarize some thoughts on this issue. And to encourage everyone to participate in FeministSF chats, obviously!

We all are familiar with the Smurfette principle—the idea that in any group of characters (such as The Smurfs) only male leads are allowed personalities, while the girl gets to be . . . well, a girl. That’s her whole shtick. It is also nothing new that urban fantasy is lousy with strong female characters—an epidemic well described elsewhere (for example, here). I am here, however, to tell you that the two of them combined created a terrible monster—an Exceptional Smurfette (or Super-Smurfette, if you will), and she is not exactly good news when it comes to representations of women in fiction and advancing the cause of said representations.

Again, elsewhere it has been well established that really, we should have more variety of female characters and various definitions of female strength since the kick-ass heroine is sort of taking over, blinding us to other species of strength (and the very notion that a woman doesn’t have to kick ass to be worthy of the protagonist status.) What troubles me most, however, is the exceptionality: in some urban fantasy books (as well as comic books and movies) this kick-ass heroine is the only woman allowed to inhabit the protagonist space. As a result, she is surrounded by men, is friends with men, is romantically involved with them, and usually is a daddy’s girl. She is, in other words, very much one of the guys.

And really, this by itself, in any given urban fantasy novel, is not necessarily a big deal. It’s just the sheer number of books and movies and other media that present this picture is so great that it becomes a normalized cultural default. And considering that this exceptional lady is just that—exceptional (what with ass-kicking and vampire-hunting and what not), a very insidious pattern is established: A woman becomes worthy of inclusion into a male domain only if she adopts a masculine notion of strength and associated power signifiers, and becomes exceptionally good at them.

Now, I have my fair number of issues with women who shun the company of their own gender—internalized sexism is a problem, and a culture-wide devaluing of all things feminine is a pervasive and often invisible force. Women often receive a message that they should become like men to become worthy, to become better, to be strong—and when we call a girl “one of the guys” we often mean it as a compliment. But the exceptional female raises the bar even higher: To be included in that masculine domain, a woman must become a superhero—something the original Smurfette never had to deal with. Meanwhile, other women who do not aspire to such pursuit are not just absent (as is the case with the Smurf village), but are painted as lesser, jealous, stupid, meddling, and undeserving. Mothers are either absent or incompetent, and fathers or father figures usually get to do a fair amount of character shaping. There are no female friends in most cases: Other women are either rivals or unflattering points of comparison. That is, Smurfs are paragons of feminism compared to this.

This situation is not only found in urban fantasy novels, of course: A slew of recent movies features such superpowered Smurfettes. One of the more interesting examples of it in movies is perhaps embodied by Hit-Girl, Chloë Moretz’s character in the movie Kick-Ass. Even though she is quite young, we can see the making of the Super-Smurfette in her. She is raised by her father, who is pretty much the main influence who shapes her; she has no friends among the girls around her age; and in the end she teams up with a lot less competent, male-superhero wannabe. (We won’t go into the whole thing where he gets to save the day). Don’t get me wrong—Moretz is wonderful in the movie. But she so obviously outclasses the titular character that one cannot help but feel that she is settling just a tad. Why? Because being one of the boys is a reward enough.

It also doesn’t seem to be much of a stretch to see the grown-up version of Moretz in Janeane Garofalo’s The Bowler from Mystery Men—another superhero flick (which predates Kick-Ass by good ten years). Her character’s father is firmly dead but still influential in the form of the talking skull inside the bowling ball with which The Bowler destroys her enemies. She is, of course, the only girl in the group—and as far as skills go, she is also the most qualified. Still, she seeks to be a part of The Mystery Men—a group of superheroes with dubious to middling powers, indicating that being one of the guys is as worthy a goal as being a superhero (and in many ways equally desirable and/or challenging.)

This is not a new phenomenon: One only needs to look to the Greek myths, to Athena (the ultimate daddy’s girl), who was positioned as exceptional even among the gods (although there were quite a few goddesses there) because of her persistent commitment to masculinity. I think it is interesting to see Athena’s behavior in The Eumenides—even though she is respectful of the Furies, she is backed by Zeus and has nothing to fear from them. And yet she talks them down, urging them to abandon retribution. She sides firmly with the men, since Furies are the ones avenging wrongdoings done to women. Athena acts remarkably like many urban fantasy heroines who identify more strongly with men and tend to take their side against their own gender. Consider:

“There is no mother anywhere who gave me birth,
and, but for marriage, I am always for the male
with all my heart, and strongly on my father’s side.
So, in a case where the wife has killed her husband, lord
of the house, her death shall not mean most to me.”

Athena, however, is an exception in the Greek tradition. Along with the absent mother (who was, ahem, eaten by Zeus) she exhibits many characteristics in common with—and provides a curious point of comparison to—modern urban fantasy heroines. After all, wouldn’t the Furies provide a much better model of strength, not dependent on male (i.e. fatherly) backing and approval? But of course, it is not exactly surprising that under the patriarchal system we do not see three women working together; we see one woman who has internalized male values, working within the system where they are allowed the benefit of exceptional status, and disparaging other women who dare to challenge this system of values and dominance.

One would expect that as the time goes on, representations of women in literature would become more diverse. And indeed they have been: There are many versions of female characters and female strength being written about. But the Super-Smurfette still towers large in her dominance. I don’t want to call out individual authors and books, because really, it’s just one way of writing female characters. However, I feel that when one archetype becomes so dominant as to pretty much be associated with the genre (urban fantasy and its heroines conform to this mold often enough for us to have this conversation), it is probably time to challenge that and to ask ourselves: Do our strong, kick-ass heroines need to be walking representations of internalized sexism? Can they function without male approval? Will they die if they occasionally have a girlfriend or two who is not into the whole vampire-fighting business and yet is presented as pleasant and levelheaded? I sure would like to see more of them.

Ekaterina Sedia resides in the Pinelands of New Jersey. Her critically-acclaimed and
award-nominated novels, The Secret History of Moscow, The Alchemy of Stone, The House of Discarded Dreams, and Heart of Iron, were published by Prime Books. Her short stories have sold to Analog, Baen's Universe, Subterranean, and Clarkesworld, as well as numerous anthologies, including Haunted Legends and Magic in the Mirrorstone. She is also the editor of the anthologies Paper Cities (World Fantasy Award winner), Running with the Pack, and Bewere the Night, as well as forthcoming Bloody Fabulous
and Wilful Impropriety. Her short-story collection, Moscow But Dreaming, will be released by Prime Books in December 2012. 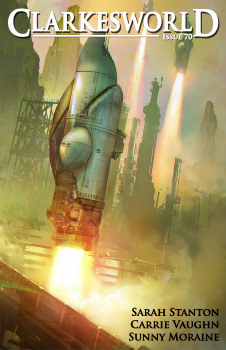