Another Word: Reclaiming the Tie-In Novel

Our society has a weird relationship with logos. Put a popular brand name on a t-shirt, and you’ll find people happy to pay fifty dollars (or two hundred dollars for Gucci!) to be a walking billboard. But put the logo of a popular game or film property on a novel cover, and suddenly genre readers will be falling all over themselves to tell you how they love fantasy and science fiction, but they don’t read those novels.

What’s even stranger is that it’s not even true. Look at the bestseller lists, and you’ll find Star Wars, Halo, and Dungeons & Dragons right up there with George R. R. Martin and Brandon Sanderson. There’s a reason you recognize names like Margaret Weis, R. A. Salvatore, and Ed Greenwood, and it’s that books based on popular properties sell.

They also inspire. After most of a decade working in the fantasy and gaming fields, I’ve yet to meet an author under fifty who, when questioned, didn’t admit to being inspired by tie-in novels at some point. We all read Dragonlance. We all fervently wished for George Lucas to make Timothy Zahn’s Thrawn Trilogy instead of the blasphemous prequels. We all know what kind of swords Drizzt uses (twin scimitars).

So why do so many of us now turn up our noses at such things?

The easy answer is that a lot of tie-in is bad—literary pap churned out by authors and editors who don’t care about quality as long as the machine keeps turning. But like most easy answers, that’s a bit disingenuous. As Theodore Sturgeon taught us, 90% of everything is crap, and I’ve certainly read plenty of creator-owned fantasy that might fit that description as well. So why do we place tie-in on a lower rung in the artistic hierarchy?

You’ll notice that I keep saying “we.” This isn’t just a literary device. For many years, I held the same opinion. As a kid, I devoured tie-in for everything from Dungeons & Dragons to Star Wars to Indiana Jones. Yet when I hit my punk-rock teens, I started questioning my former infatuation. The fact that tie-in required an author to work with an IP holder—a corporation—no longer jived with my concept of art. Surely real artists wouldn’t allow themselves to be impacted by the forces of commerce. These authors of “corporate fiction,” as I called it, must be sellouts and has-beens.

That opinion lasted right up until I started working in publishing, at which point I discovered that my entire concept of how books were made was hopelessly naïve. Authors—even of creator-owned works—rarely operate in a vacuum. The idea of a novel as a pure and perfect transmission from author to reader tends to shatter the first time an author gets revision notes back from an editor. And as for being free from the forces of capitalism—well, maybe in self-publishing, but last I checked most publishers are in the business of making money, and an author who doesn’t work with them to try and maximize sales tends not to be their author for long.

But the final nail in the coffin of my anti-tie-in prejudice was provided by the authors themselves. You see, there were simply too many good authors doing it. And not just good authors within the tie-in world—big name authors that had won awards and published bestsellers doing creator-owned work kept turning up in the mix. Brandon Sanderson. Greg Bear. Tobias Buckell. If you really want your head to spin, wrap your brain around the fact that Nicola Griffith—perhaps the leading voice in feminist and queer SF, with enough major awards to deck out a Christmas tree—wrote stories for Warhammer back in the 80s!

These authors didn’t suddenly lose their chops just because they were writing tie-in. If an awesome author can write tie-in, then it must follow that tie-in can be awesome.

This realization came none too soon for me, as it was around this time that I was put in charge of launching Pathfinder Tales, a line of novels set in the world of the Pathfinder Roleplaying Game. As the Managing Editor for Paizo Publishing, I’ve been on a mission ever since to help tear down the idea that tie-in fiction is somehow inherently lesser than creator-owned fiction. Toward that end, I’ve made it my mission to not just hire from inside established tie-in author circles, but to reach out to mainstream fantasy and science fiction authors as well. Along with popular tie-in authors like Ed Greenwood and Elaine Cunningham, I’ve also been fortunate enough to bring in authors like Hugo Award-winner Tim Pratt, Howard Andrew Jones, and Liane Merciel.

While tie-in work obviously isn’t for everyone, as the representative of The Establishment, I see it as my duty to give authors as much creative control and ownership as possible over their characters and plots. We provide the world, they provide the stories.

As a writer, tie-in work is an admittedly mixed bag. I’ve personally written two Pathfinder novels, Death’s Heretic and The Redemption Engine, and while Death’s Heretic ending up at #3 on Barnes & Noble’s Best Fantasy Releases of 2011 did a fair bit to quiet naysayers (especially the ones inside my own head), there were plenty of friends who cautioned me against getting into tie-in. As one longtime editor put it, I ran the risk of getting “stuck in the tie-in ghetto.” Certainly tie-in doesn’t often win awards. And unlike a creator-owned project, if you do get a hit, you don’t own the rights to your work, and that money goes primarily into the IP-holder’s pocket.

Yet as one of my authors, Dave Gross, once said: “In tie-in, the ceiling may be lower, but the floor is higher.” It’s true that if your tie-in character gets huge and ends up on happy meals and Saturday morning cartoons, you’re not going to see much of that money. At the same time, however, tie-in comes with a built-in audience. Especially for new authors, there’s always the chance that a creator-owned novel will stall out at a few hundred copies (or, god forbid, a few dozen). In tie-in, however, a lot of that risk is ameliorated. You can release your new novel knowing that there are thousands of fans of the brand who’ll buy that book even if they have no idea who you are. And while it’s no guarantee, the hope is that some of these fans will then go out and buy your creator-owned work.

There’s another huge incentive for tie-in writers as well, and that’s the nature of tie-in itself. When you see somebody like Greg Bear writing for Star Wars, do you really think it’s just about the money? Or do you think it’s because, like the rest of us, he’s spent a lifetime enjoying that universe, and is eager to play with the toys? At its root, tie-in is fan fiction that you get paid for, and gives you the chance to say to your friends, “You know that thing we love? Well I’m now officially a part of it.” As an editor and game designer, some of my favorite moments come when authors I respect contact me to let me know that they’re playing Pathfinder at home.

And as much as working within an established world can tie your hands, it can also prop you up. I’ve had several authors tell me that they love writing tie-in because it allows them to outsource the part of SF writing they’re shakiest on—the world-building—and focus more energy on plot and character. While I’m admittedly a world-builder first and foremost—hence my day job—even I have to admit that it’s a thrill to be able to cherry-pick the best ideas from a team of incredible world-builders and incorporate them into my own work.

As a young punk, I rebelled against tie-in as evidence of The Man holding artists down. Now, as an older and (hopefully) wiser punk, I want us to rebel against what’s really holding us down: bullshit hierarchies. As self-avowed nerds, we ought to know the unfairness of being arbitrarily placed on a low social rung. We rail against mainstream society not understanding us, and bemoan those backward literary critics who disparage science fiction and fantasy as “wish fulfillment for young boys.” Yet we then turn around and build our own elaborate hierarchies to put each other down. Video gamers look down on roleplayers who look down on LARPers who insist that at least they’re not furries.

All of which is simply spitting on others so that we can ignore the spit on our own heads. That’s third-grade playground politics. In this era where we’ve got supercomputers in our pockets and robots trundling around Mars, is that really the best we can do?

Perhaps my tone is too strident for a conversation about tie-in fiction. There are plenty of causes more worthy of impassioned speeches (and I fully expect this space will be used for them, by authors far more qualified to speak than I am). Yet whether our biases are big or small, artistic or social, questioning them is how we move forward and grow as people, as a subculture, and as a society.

So let’s stop judging books by their covers.

James L. Sutter is the Managing Editor for Paizo Publishing and a co-creator of the Pathfinder Roleplaying Game. He is the author of the novels Death's Heretic and The Redemption Engine, the former of which was #3 on Barnes & Noble's list of the Best Fantasy Releases of 2011 and a finalist for the Compton Crook Award for Best First Novel and an Origins Award. He's written short stories for such publications as Escape Pod, Apex Magazine, Beneath Ceaseless Skies, Geek Love, and the #1 Amazon bestseller Machine of Death. His anthology Before They Were Giants pairs the first published short stories of science fiction luminaries with new interviews and writing advice from the authors themselves. In addition, he's published a wealth of gaming material for both Dungeons & Dragons and the Pathfinder Roleplaying Game. 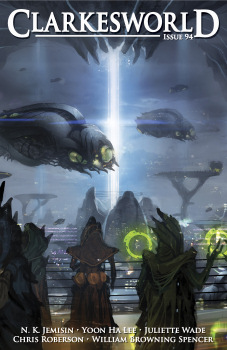