Another Word: What I Did on My Summer Vacation

Summer vacations often encapsulate our fondest memories and this year was no exception. I had the privilege of spending seven days of my summer at the University of Wyoming, Laramie, eating dorm food, sleeping in dorm beds, and walking a few miles each day to get to the various classrooms on campus. Oh, and for about twelve hours each day, I sat in lectures on everything from phases of the moon to the spectral analysis of stars to black holes and the very foundations of the universe itself. I did all of this with a dozen other classmates, all of them writers trying to get a better understanding of astronomy and how to communicate it through their writing.

This was the Launch Pad Astronomy workshop, and I’m not sure I could have dreamed up a better summer vacation if I tried.

What is Launch Pad?

As the website describes it: “Launch Pad is a workshop for established writers in beautiful high-altitude Laramie, Wyoming. Launch Pad aims to provide a ‘crash-course’ for the attendees in modern astronomy science through guest lectures, and observations through the University of Wyoming’s professional telescopes.”

Actually, Launch Pad turned out to be a whole lot more. We had amazing lectures, some of them given by Mike Brotherton, a science fiction writer himself, and a professional astronomer at the University. Other talks were given by Andria Schwortz, a graduate student at the University and a science fiction fan and gamer in her own right. Our guest lecturer this year was Christian Ready, who has worked on the Hubble Telescope, and who has had his nonfiction about Hubble published in Analog.

Beyond the lectures, however, was a camaraderie that can only be conjured from a mixture of intensive study, eating all of your meals together, hanging out in the bar until the wee hours of the night, and talking shop in the lounge on your breaks.

We sat through hours of fascinating lectures and we bonded with an easy camaraderie. The result was a group of people who came out of seven days exhausted, but with a much better understanding of basic astronomy, as well as an appreciation for the art of telling stories and communicating what we learned in a meaningful way.

During our week at Launch Pad, our unofficial motto became, “Not To Scale,” and that phrase describes Launch Pad very well. Launch Pad is not to scale. It is much, much bigger than it seems.

This year marked Launch Pad’s seventh year of operation. Launch Pad selects a diverse group of attendees for each of its classes and our group was no exception.

Several people—Andy, Liz, and Caren—were all alumni of Clarion and so they had previous experience in intensive, writing-related workshops. This was a first for me, and initially, I was amazed at how quickly we all bonded.

Looking back on it, I should not have been so surprised. Like the stars we studied, we all burn with the same essential elements: the desire to create, the desire to write, and the desire to learn more about the universe that we live in.

Learning fuels the desire, the desire drives the creativity. We all have that, and because of that, it seemed to me that we all found ourselves on the same wavelength.

A few of us—Chaz, Doug Farren and I—were early risers and would walk over to the student union at 7 am to squeeze in a few hours of writing before lectures started. Sometimes, Brenda would join us there.

At 8:30 each morning, the vast majority of us would head over to the Turtle Rock Cafe and have breakfast together. We’d take up half the restaurant, eating our bagels or egg scrambles and talking shop, or talking about things completely unrelated to writing, depending upon the moods of the moment.

We had three or four (and sometimes more) lectures each day. To reinforce what we learned, we had practical, hands-on activities. These experiences took us out of the classroom and gave us a feel for what it was like to work as a professional astronomer.

On the evening of our second day at Launch Pad, we headed up to the roof of the physical sciences building where three small telescopes had been prepared for our use. The moon had just passed its first quarter, and even so, once the sun set, the sky was filled with stars.

For attendees who live in big metropolitan areas, it was a wonderful sight. We saw Saturn with its rings and Titan lingering at a distance to one side. We looked at the terminator on the moon. We looked at binary star systems.

At one point during the evening, Mike Brotherton brought out his night-vision goggles. Looking at the night sky through them is a breathtaking experience. Instead of the few thousand stars you typically see, you can see millions. Occasionally I’d hear a hiss of breath sucked in from somewhere nearby and know that someone was looking through those glasses.

Later that evening, we were able to see the Andromeda galaxy. Seeing it was amazing and it gave perhaps the truest sense of scale and proportion. The Andromeda galaxy is some two million light years distant, and looking at the blurred object through those goggles, we were looking two million years back in time.

On another evening, we headed up to the Wyoming Infrared Observatory (WIRO) some ten thousand feet above sea-level and got to watch undergraduates in astronomy at work, this time using a 2.3-meter infrared telescope.

There were also other, smaller activities. In one instance, we learned to identify elements by their spectra. In another lab, we took raw images taken from Hubble and other telescopes in different frequencies of light, and learned to put them together and clean up the noise in the image.

We also learned how to look at the light curve of stars. We attempted to find the telltale drop-off in light that might indicate the transit of a planet. It is even possible that a member of the class, Douglas Dechow, discovered a planet surrounding a distant star as the drop-off on one of his stars was both regular and strong!

Getting our hands dirty in the real science that makes astronomy so fascinating was a crucial part of Launch Pad. Writers are often told “Write what you know,” and most of us, especially science fiction writers, tend to eschew that advice. None of us have ever visited distant worlds, or orbited black holes. But learning how to take raw images and create works of art with them; or looking through night vision goggles and seeing Andromeda, these are things we have done and they reinforce our imaginations.

Launch Pad is not just for people who write hard science fiction stories. Indeed, it is for anyone who writes science fiction, or science non-fiction for that matter. It is an equally wonderful experience for amateur astronomers.

Part of what I took from Launch Pad was an intensive refresher on basic astronomy. I learned why it would be silly to have a character’s blood boil away if they were exposed to space. I learned subtleties of world-building, like how the axial tilt of a planet affects the seasons of that world. And I learned why we would be unlikely to find planets with intelligent life around class A stars. These takeaways improve the science in my stories.

I also made fifteen new friends at Launch Pad. Most of them are writers. We have many other friends in common, but now, we also have the week we spent at Launch Pad together, sitting in lectures, eating our meals, talking about movies, baseball or our favorite authors and stories.

I came away from Launch Pad with half a dozen story ideas based on the things we learned there, but I also came away with a solid foundation of basic astronomy, a must-have for a science fiction writer.

I was six years old when I got my first telescope, and throughout this workshop, I kept wishing that I could go back in time and tell my younger self, “Kid, you think this is cool? Just wait. Just wait . . . ”

Jamie Todd Rubin is a science fiction writer, blogger, and Evernote Ambassador for paperless lifestyle. His stories and articles have appeared in Analog, Daily Science Fiction, Lightspeed, Intergalactic Medicine Show, Apex Magazine, and 40K Books. Jamie lives in Falls Church, Virginia with his wife and two children. Find him on Twitter at @jamietr. 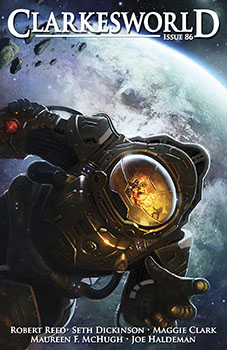