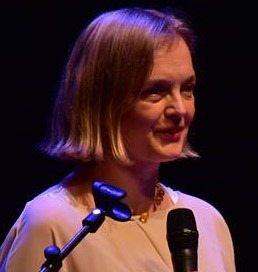 Bo Balder lives and works close to Amsterdam. Bo is the first Dutch author to have been published in F&SF, Clarkesworld, Analog, and other places. Her sf novel The Wan was published by Pink Narcissus Press. When not writing, she knits, reads and gardens, preferably all three at the same time.

Bo Balder has the following works available at Clarkesworld:

Sometimes piracy is easy. The generation ship invited us aboard in the first sentence of their message. No threats needed. The ship was gigantic, at least two centuries old. That and the utter naivete told me a lot. “What does that mean, consigliere Katla?” Einar, the captain, growled. “Trap?” He was standing dead center on […]
The Official Summons buzzer jolted Alzey out of her hungover daze. This had to be the results of her hearing. Now that she’d signed herself out of therapy, normal adult duties would resume. Might as well hear the verdict right away. The computer voice reeled off her SSN, age, et cetera, all her identifiers, the […]
The alien must have been reading up on humidity conditions for its terrarium, because we’d already gotten three mistings today. I lifted my head above the mud, where I’d lain hidden since dawn. I breathed through my snorkel reed, which was nearing the end of its usefulness. Another obstacle in my already busy day. It […]
Sifan put her exoskeleton on after breakfast. Her private space in the IG-pod was cramped, and even an act as simple as eating drained her in Wenshi’s heavy gravity. That gravity demanded so much of her body she had to eat twice as much as she wanted to. She opened the door and stepped outside. […]
When Havi came back, eleven years after having fled five wormhole hops away, Malala wormhole hub didn’t look very different. Maybe a bit shabbier, a bit more crowded. The coldsleep hangover crashed down on her like a barrel of fish and she changed her plans into sleep first, right now. She headed for the rack […]
Onway dreaded the condolence visit, but still she hurried to the front door. It was never wise to expose yourself to Nueva Esperanza sun for long, even with skin as dark as hers. “Mx. Tschiao, I’m Onway Jansen, your daughter’s psychiatrist. My deepest condolences. May I come in?” The mother’s haggard face darkened with emotion. […]
I was the first. Not the first to touch the God, but to notice the effects of the Godflesh. Mother and I had walked up to where the God’s hand had landed, crushing houses and flattening trees. The left hand had buried itself partially in the ground, palm down, so even though the pinky finger […]
Yoshi scythes the lotus seedpod with orange-slickered arms and tosses them in the harvesting bag on her back. The blue sky overhead reflects ominously in the still ponds below. She reaches out and cuts the same perfect pod again. This means she’s in the dream. Any moment now. Dream-Yoshi can’t stop her hands cutting that […]
Gouda’s clients have always lost someone, even if it takes them a while to work up to it. This man has lost a daughter. His kind, round face is grooved with sadness. She likes him at once, which isn’t her usual MO. “She was taken two years ago,” he says. “Me and the wife had […]
The man who comes down the mountain causes the end of Alois’ life. It seems an ordinary sunny spring day; people venturing out and about again after a long cold winter. One such person is the old man leaning on his cane. Nobody special. Except that he suddenly stumbles, clutches his left arm, falls over, […]
The seat seals tighten around Paddy as The Grass is Always Greener on the Other Side flexes into its wormhole hop. She flicks a look to Lieutenant Asha, whose red corkscrew curls she admires—not to mention the rest of the lieutenant—and focuses back on her optics maintenance. The wormhole loop feels as if she’s become […]