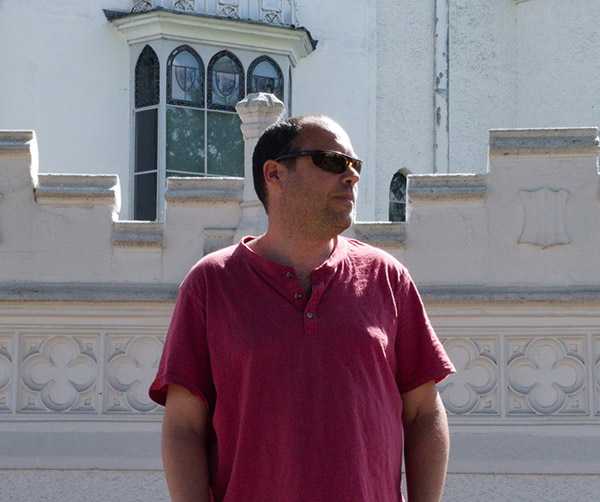 Lavie Tidhar is author of Osama, The Violent Century, A Man Lies Dreaming, Central Station, Unholy Land, By Force Alone, The Hood, and The Escapement. His latest novels are Maror and Neom. His awards include the World Fantasy Award, the British Fantasy Award, the John W. Campbell Award, the Neukom Prize, and the Jerwood Fiction Uncovered Prize, and he has been shortlisted for the Clarke Award and the Philip K. Dick Award.

Lavie Tidhar has the following works available at Clarkesworld:

The walls were beige and you could see where the rust took hold. A tiny dead robot floated past Amir, feelers drooping. It was the same color as the walls and shaped like a grasshopper. Amir made a grab for it but a hidden maintenance duct sucked it up and it vanished with a soft, […]
1. Two men in dark sunglasses stepped through the doors of the Monte Carmelo. They stopped and scanned the gloomy inside. Geshem-Nofel-Ba’oranim clocked them and kept to his booth. He knew trouble when it walked through the door looking for him. The two men were armed. Security, probably federal. That’s if Geshem was lucky, if […]
Purple clouds roiled on the horizon and the old Cessna Centurion came in low and fast, riding the tailwind. Giorgio, on the ground and looking up, took shelter behind a crude half-shed of corrugated iron and lit a cigarette with a Zippo he’d once bought in the Talat Sao back in Vientiane. It was supposedly […]
Samit died in the night, surrounded by flowers. Outside the acid rain fell onto the planet. The kite runners drove their kites against the clouds, their minds roaming freely through the Conversation. At a gala reception on the upper deck of the cloud city a jazz band played old Earth songs to welcome in a […]
Sahar, moving softly through the river valley, made sure to listen. The sound filtered into her helmet from the external mics, and she imagined this must be what hiking on Earth must be like. She listened to the wind; to the rumble overhead from the active ice volcano; to the storm raging on the horizon. […]
There was a time of rains. They lashed the old hill and the cobbled market, driving traders under awnings, robotnik beggars into litter-strewn alcoves, revelers into bars and sheesha pipe emporiums. The smell of lamb fat, slowly melting over rotating skewers of meat, flavored the air, mixing with the sweetness of freshly-baked baklava and the […]
Achimwene loved Central Station. He loved the adaptoplant neighborhoods sprouting over the old stone and concrete buildings, the budding of new apartments and the gradual fading and shearing of old ones, dried windows and walls flaking and falling down in the wind. Achimwene loved the calls of the alte-zachen, the rag-and-bone men, in their traditional […]
On the roof the solar panels were folded in on themselves, still asleep, yet uneasily stirring, as though they could sense the imminent coming of the sun. Boris stood on the edge of the roof. The roof was flat and the building’s residents, his father’s neighbors, had, over the years, planted and expanded an assortment […]
The sky was the color of ash and the Whistler has been at it again: the shrill sound of his whistle rang like a curse down the abandoned street. Damn kid, the priest thought. Damn stupid kid. It was a miracle he was still alive. It was a miracle. The boy was cursed, or blessed, […]
1. Bonsai It’s a beautiful world, easily worth killing for, but what would be the point? The world, encased in vacuum and glass, is blue-white, a miniature Earth, with a marble-sized sun rotating around it. It has a tiny atmosphere, tiny, lovingly-sculpted seas, three continents, numerous tiny islands, tectonic plate activity, miniature volcanoes, and some […]
When they came for Hershele Ostropol it was not at night but in the middle of the afternoon, and they came quiet and with no warning, with just a polite knock on the door. He had taken it to be the postman, carrying a late delivery of one of his special magazines; but the two […]