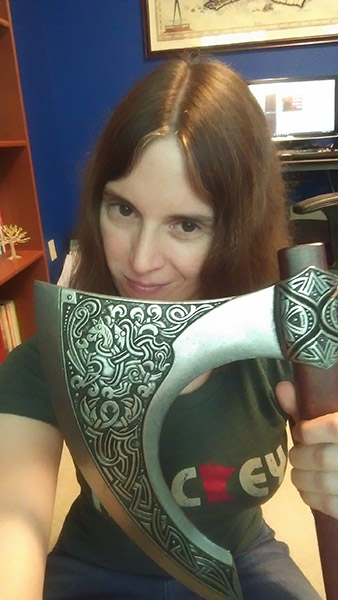 Marissa Lingen writes fiction, essays, and poetry. She lives atop some of the oldest bedrock in North America, where she has a large collection of tisanes and a keen and constant hope for snow. She is among the premier speculative fiction writers in the world named after fruit.

Marissa Lingen has the following works available at Clarkesworld:

The warning light went on as soon as Jess started the car. Low tire pressure. The obstetrician expected her in forty-five minutes, and it was a half-hour drive. She got back out to look at the tires, sighing with what little lung capacity she had in her cramped, shared body. The passenger’s side front tire […]
The day I found out my Uncle Will was still alive, I had been out spraying the crops in a full crinkly hazmat suit. The Earthers I was working for were nice people, but they always whined about the suits. To me they seemed light and airy, hardly even an annoyance compared to a vacuum […]
Dr. Hannah Vang watched the cephalid turn the box over with his tentacles. She leaned forward, aware of the timer out of the corner of her eye without watching it. He was a smart beastie, she knew, and would get into the box to get the icthyoid in it. The question was whether he’d learned […]