Revealing How the Elements Cohere: A Conversation with Elizabeth Bear

Elizabeth Bear's first novel, Hammered, launched the Jenny Casey series and Bear's career as an award-winning novelist. With each new novel and each new series, Bear's writing continues becomes impossibly richer, brasher and more stunning. Her worlds are breath-taking and her characters as real as bone and steal.

These are but a few of the reasons she's won the Locus Award, the John J. Campbell Award, and multiple Hugo Awards.

"Elizabeth Bear comes across as brassy and bold — I once saw her doing the pogo to the Ramones at a karaoke event — and her fiction follows suit," said Lettie Prell, a novelist and the former editor of Broadsheet. "Her character Jenny Casey of Hammered, Scardown and Worldwired is addicted to a chemical enhancer that increases reaction time, leading to tension-filled SF adventure. Yet the Jenny Casey trilogy is about character and relationships as well."

In addition to the Jenny Casey novels, Bear is the author of the Promethean Age, Jacob's Ladder, and the Edda Burdens series. She is the co-author of the Iskyrne series with Sarah Monette. Her most recent books include the Chill, Bone and Jewel Creatures, and the forthcoming The Sea Thy Mistress.

"I write about things that irritate me,'" said Bear. "Or, in the words of some guy named Cicero, 'I criticize by creation — not by finding fault. I tend to write arguments — arguments with myself, arguments with the world. I'm very bad at choosing sides, so I tend to thematic arguments rather than thematic statements."

Below, Bear and I talk about characters, settings, and fiction that both angers and comforts. 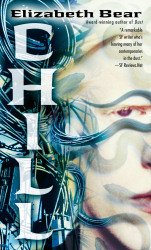 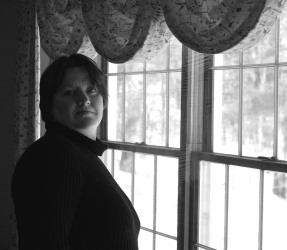 What is the central argument of All the Windwracked Stars and By the Mountain Bound?

This is where I say "If I could have said it in less than a hundred thousand words, I would have."

They both have to do with responsibility, though.

The two books are thematically linked, but not identical. And By the Mountain Bound wasn't the second book; it was the third. The Sea Thy Mistress was written second, although it will be published third.

That's kind of a peculiar question, for me. I don't think of it as something I enjoy, but rather something I do, something I am. I tell stories: I always have.

I do find it very satisfying when something I've written reaches someone, connects with them, and gives them hope or comfort or a place to hang an epiphany — that makes me feel like I've justified my existence.

How has your understanding of the craft changed over the years?

I've come to understand a lot of things that are hard to articulate — that there's no single way to write a story; that the best tool for any given task is the simplest available that will do the work, but some tasks are damned complex; that there's no single way to read a story; that a story that doesn't piss anybody off is also incapable of giving anyone else comfort; that you cannot control what other people read when they read your words.

I've also, I hope, built up a pretty good toolbox for trying to prove that last wrong.

Remember: just because people tell you something about writing, doesn't mean it's useful or true.

Any particular time that a story or novel that has pissed off one and comforted another reader? Is there one that has seemed to be particularly volatile in terms of the response it elicits from readers?

Not really. Any given story contains both potentials. The only way to avoid it is not to write.

I've gotten hate mail about the swearing in Hammered — somebody who was offended that he couldn't give it a twelve year old. (My response to that one was something to the effect of, the book has the word shit on the first page. Your twelve year old probably already knows every word in the book. And I'd be more worried about the graphic violence, if it were my kid.) I've also received commentary that the book was comforting to people in times of need.

What's hard is when somebody walks away from a story with hurt feelings because of something the writer never intended.

The world of All the Windwracked Stars and By the Mountain Bound is staggeringly beautiful. Where did you start and how did you build it?

Oh, you know? I'm not really sure. I've had Eiledon in my head for a long time. The name is taken from a Big Country song off their third album, which describes an imaginary destroyed-and-reborn city. I've always thought the name was a play on "eidolon," which seemed appropriate to my use.

The entire setting, to be sure, is strongly influenced by me being a child of the 80s, so it's doubly appropriate. There's a lot of Mad Max and Thundarr the Barbarian and Krull in there, a lot of the post-apocalyptic steampunk-before-steampunk-was-cool of my nuclear-shrouded adolescence in there. I am of the generation that took it for granted that the world was going to end, but that what came after might involve Tina Turner in chain mail. And oh boy, does that seep out of the world of the Edda of Burdens.

From there, it developed over the course of years. Decades, really, as I think I first came up with Eiledon in the late 80s, Muire in 1993 or 1994, and I didn't sell All the Windwracked Stars until 2007 or so. So as you can see, it's been a long time growing. I'm fascinated by the intersection of myth and technology, and being a second-generation Swede, it was natural to explore Norse myth.

Since September 11th, 2001, maybe, we live with a sense that disaster is likely, but not necessarily cataclysmic. Do you see any ways in which the events of the last decade have shaped the world of Eiledon?

Well, the books probably wouldn't have gotten written if 9/11 hadn't happened, because I was laid off from job afterwards and spent my period of unemployment writing them. And Hammered and Scardown. But no, I don't think they're all that effected by the Bush years. Blood and Iron was more focused on the problems of a post-colonial world.

The characters of the Eiledon books are so complex, so human, so alive... how do you do develop your characters?

Oh man. Jay Lake has a theory that every writer gets one or two cards free, and has to collect the rest (with regards to building a complete set of writer skills). Characterization was one of mine. The other was structure.

Basically, for me, characters happen in one of two ways. Either they step up from Central Casting, introduce themselves, and we're ready to go — my problem becomes mining them out to find out what secrets they're keeping from me. Or I have to build them from a kit, assemble motivation and desire and wants and needs and fears.

I have a thing I tell students — one of the most important things you can learn about a character is what they want on their tombstone.

Characterization, for me, is a matter of revealing how the elements of a person cohere — contradictions, harmonies, main themes and relationships. Everybody is trying to see themselves as a hero, and everybody is fragile as old glass if you hit them right. It's all about the tensions between those things.

Does the character- and world-building process change much when you are collaborating? Can you tell a little bit about the writing of A Companion to Wolves with Sarah Monette and your work on Shadow Unit?

My processes don't change, in particular. Collaboration is hard, but it does have the benefit that when you get bored with what you are writing, you can send the manuscript to the other guy.

You have to be willing to relax your control issues a lot to collaborate.

The descriptions in your novels — of setting, of character's actions, of creatures — are lush and rich... and so immersive (if that's the right word.) How do you go about describing something? Are there strategies you use? Do you have advice for beginning writers?

Funny you should ask. I'm not a very visual person, and I tend to rely more heavily on other senses, particularly tactile ones. Visual description has always been extremely hard for me: I have to concentrate to remember to put it in at all, and to make it interesting.

As for advice, well, I would repeat John Gardner, and suggest that any beginning writer pick up a copy of On Becoming A Novelist. Which is not a book on writing technique so much as it is a book on learning to observe as a writer, to find the telling detail, and create what he refers to as a vivid and continuous fictional dream.

In a more concrete fashion, I suggest the writer concentrate on the telling detail. The thing that makes a chair not a chair, a generic object, but this exact chair right here. Which means the writer has to stop seeing the world in terms of symbols, and start seeing it in terms of real objects.

What are you working on now?

I'm about to start my second draft of Grail, the last book in the Jacob's Ladder trilogy. As soon as the edit letter gets here. I'm also working on Shadow Unit, as you mentioned, some short stories and novellas including another New Amsterdam story, and I have two other novels due this year — the sequel to A Companion to Wolves and the first book in an epic fantasy trilogy, The Steles of the Sky.

I'm more or less up to my neck in work, in other words. The scheduling alone is a huge challenge, and trying to keep quality up, and thinking up new and interesting ways to tell stories. One of the shorts will be in third person objective, which is a new point of view for me, and there's also the issue of keeping the balls in the air on Shadow Unit, which is a positively epic undertaking. 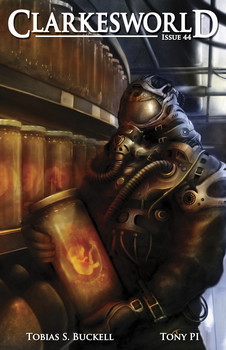