Transparency and Transformation: A Conversation with David Brin

If there ever was an argument in favor of sci-fi influencing scientific advancement, the work of David Brin would surely be a cornerstone. From his novels and ambitious short fiction to his research into cometary studies, optics, and spacecraft design, David Brin is not only dreaming about the future, but, in some ways, helping to make it a reality.

His newest collection of short fiction, and a couple of essays, highlights a singular author’s acute talent at peering just over time’s horizon to pick out what is coming next. Insistence of Vision features some of Brin’s finest short stories. People fly like gods, have their DNA completely transformed, or send varying waves of ever faster satellites to explore the deepest parts of space, each probe moving faster than the last. It’s a collection that highlights the many facets of one of science fiction’s sharpest minds.

David Brin is a scientist and New York Times bestselling author. He has won numerous awards, including the Hugo, Nebula, Locus, and John W. Campbell awards. He helped to create the Arthur C. Clarke Center for Human Imagination, serves on the advisory board of NASA’s Innovative and Advanced Concepts group, and has consulted with groups ranging from the CIA to Google. David Brin’s third collection, Insistence of Vision, was released in March by Story Plant. 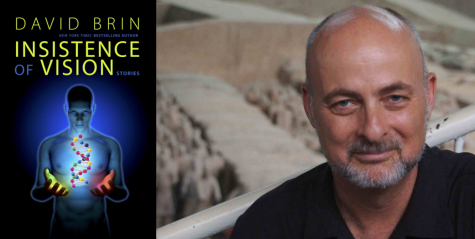 You’ve published numerous novels and continue to work in the short fiction realm. What is it about short fiction that keeps you writing in that form?

The shorter the story, the more it resembles poetry, in that your aim is to achieve emotional power. The words in a short work are sonic, they combine as musical notes do. Whether the seed is a character, a problem-to-solve or an idea, there’s no room to spare for fluff or elaboration. The seed must crystallize into something with its own beauty. In contrast, a novel is worldbuilding, a future, a territory, a vast network of ripples spreading and overlapping from initial cause. You may write beautiful passages, but the words are less sounds than atoms in a much greater whole.

Transformation is a theme I’ve noticed running through some of the stories in this collection, particularly “Chrysalis,” with the reawakening of dormant human DNA. Do you think humans have evolved to a point where the next step in the process may be caused by science and technology rather than the way natural selection has proceeded in the past?

A theme that has long entranced me is adolescence, and how we individually—or as a species—wrestle with the dilemmas of growing up. Of deciding to be responsible, even if barely in the nick of time. (Which is how nearly all teenagers finally do it.) We are picking up the Tools of Creation now, in real time. And the possibilities for blowing it—for burning our fingers or maybe burning down the lab—are all around us. The universe may not care if we make it. Or else, perhaps it is holding its breath, waiting for us to decide whether we truly want to be apprentice gods.

When working on your novels or short stories, do you have a specific process in place when extrapolating forward into the future? Do you look through any particular forums or publications?

I accept that I am many. The mad poet has his uses. As does the scientist. They listen—to the rhythms or words and music that fill this brash civilization as well as to the summit discoveries of our leading minds. Learn to listen, to read and explore and knock on doors. If I tell students anything, it is to knock on lots of doors and ask: “Excuse me but what do you do here?”

Transparency has figured in a number of your stories. In particular, information about individuals is readily available at the twitch of an eyelid. What are your thoughts on the push and pull of privacy and transparency going on today?

Light wants to flow, it does flow. Our new tools will spread it everywhere. If we try to restrict it, all we’ll guarantee is that only elites will become omniscient. Elites of government, commerce, wealth, technology, criminality. But we’ll have blinded us—the common citizens. There is an alternative. Accept our duty to become partial gods. Knowing and free and behooved to become at least a little wiser.

It’s all right. We’ve done this before. Remember learning to fly? Our grandparents did that thing. It still amazes me. And it was allowed. It was beautiful. So will it be, when we are people who know.

In “Waging War With Reality” you write, “The brightest physicists play with Zen riddles, and some great engineers have also been noted artists or musicians.” Do you have any other hobbies?

In earlier decades I played violin, then guitar, and sang a bit. Some drums. Now all I have left is a mean harmonica! Painted a bit. But obviously words have been my colors. Writing and speaker-ing were my pastimes as a scientist till they took over. Now? It’s the science that I treat as my part-time art. I actually enjoy it more, that way.

You have an interesting view on criticism. You’ve mentioned that it is a gift from your enemies. Can you elaborate on that?

Human beings—all of us—are inherently delusional self-deceivers, rationalizers, and cheaters. History shows that no elite group can be trusted to rule wisely. No, not even the elites you happen to admire. Not even you. Not even me. Oh, some professions use hard-won tricks to reduce the total amount of self-delusion. The law tries. Science teaches millions some methods of honesty and reality checking. But scientists are still human.

Only here’s the interesting lesson that our greatest sages gradually realized: Pericles, Ben Franklin, they noted that we are pretty good at spotting the delusions of other people. I am not in love with your mistakes, the way you are, and hence I can point them out. And my own beloved errors? I am sure you’ll be happy to explain them to me. And here’s the great deal: you are willing to point out my mistakes . . . for free!

Criticism is a gift economy. We toss it as a freebie to our biggest foes. And if we are smart, we look at it that way, when they hurl critiques at us. Criticism Is The Only Known Antidote To Error . . . CITOKATE. Oh sure, we hate it! That’s the biggest human tragedy, that we—almost all of us—have exactly the wrong reaction to criticism, which is the one thing that enables you to find your errors and correct them.

What projects are you working on now?

Novels, stories, nonfiction . . . how I wish I had the self-copying machine from Kiln People! Oh, and answering interview questions. Dang, I was planning to cut down on that . . .

Do you still hate Yoda?

Not so much hate as just a clear-eyed recognition that the nasty little green oven mitt is—beyond all question—the most evil and destructing character ever created, in the history of human mythology. Just that. Never wise, even once, at least he fails at every ambition, and good old Luke finally learns to ignore the awful little gnome! After finishing Star Wars on Trial, I have mostly ignored him, too! 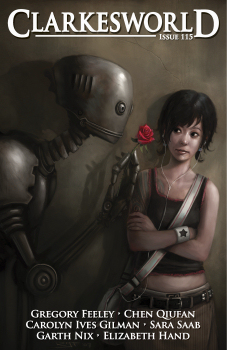