Riding a Whale through an Ocean of Lard: A Conversation with Jesse Bullington

Two men row a boat above the trees. Below them, eels swim through the branches and bream swirl in birds’ nests. Soon, the two men float over a silt and moss covered town; they hear “unquiet spirits” and remembered laughter. The opening pages of Jesse Bullington’s new novel, The Folly of the World, flow with the liquid logic of a dream.

Three years in the writing, The Folly of the World is set in the flood-ravaged Low Countries of Holland in the 1420s. Folly drips with history, oozes with folklore, but never festers. Instead, he digs relentlessly.

“If I didn’t think it was important to expose and explore the absurdity and grotesqueness of the world, then I wouldn’t write what I do,” says Bullington below.

Bullington’s first novel, The Sad Tale of the Brothers Grossbart, followed Hegel and Manfried Grossbart across Medieval Europe and the Near East—a world of plague, poverty, and grave robbing, of greed and desperation.

Next came The Enterprise of Death, set in Renaissance Europe and somehow more harrowing than The Brothers Grossbart. Like its predecessor, Enterprise has all the guilt and gore, selfishness and self-loathing, but it also has a ticking clock, a necromancer and a Moorish slave who aligns herself with an artist, an alchemist, and a mercenary.

Each landscape and each portrait comes alive in his novels, painted with a dark yet vivid palette, a steady but restless hand. The colors are, at times, saturated and at others bleak and stark—and always striking. Jesse Bullington doesn’t merely poke and prod humankind’s open sores; he finds the brilliance and laughter in even the darkest of times. 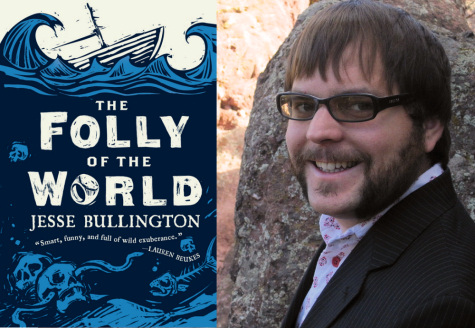 Let’s talk about the opening of The Folly of the World . . .

Oh, I’d much rather we didn’t—it’s the only part many potential readers will actually read, so why spoil it for them?

So this is your third published novel. Has writing gotten easier or harder? Has your process changed much?

As always, the difficulty of writing depends entirely on the project—certain things just require a lot more time and effort than others. Sometimes it’s the worthier endeavors that really need to be fought onto the page, but in other instances when I’m really struggling it’s because I’m off the mark in my approach, or working on the wrong thing entirely.

In terms of process, I’d say that with each passing year I get better and better at recognizing what works best for me in terms of writing habits, and avoiding the sorts of traps I inevitably set for myself, but the process itself remains the same—brainstorm, research, write, weep, draft, research some more, ponder, beg for help, revise, etc . . .

The Folly of the World of is set against the St. Elizabeth flood of 1421. I wonder, in what ways is the creative process similar to raging storms, breaking dikes, and flooding waters?

The creative process is equivalent to erecting a miniature replica of the Taj Mahal using only matchsticks and chewing gum while riding a breaching humpback whale through an ocean of lard; also, your eyes have been pecked out by sea gulls and your hair is on fire. All other metaphors and similes fail to snare the foot of the matter.

Many reviews point to the grimness, gruesomeness, and dark humor of your novels. In what ways do reviewers tend to misinterpret or miss the point of your novels?

Oh, the grimdarkness of it all! On the one hand, everything you mention is present, but I think where some readers miss the point is by focusing on these elements and ignoring everything else, and I like to think that there is quite a bit of “everything else.” Unless you live an extremely sheltered and privileged life, reality is a sea teeming with the grim and the gruesome, and finding humor in otherwise bleak situations can be one of our best lifebuoys. I don’t think that my work is gratuitously grotesque, grim, gruesome, grisly, gritty, etc.; I just think that a lot of people would prefer not to focus on how horrible the world really is, at least not in their leisure reading—if you’re picking up books solely to escape the depressing state of affairs that is reality, then a hard engagement with sundry problematic issues may not be your cuppa.

Now, I understand not wanting to constantly saturate oneself with the ugliest aspects of humanity, and I have been known, on occasion, to favor a light-hearted diversion or two myself. I really don’t (always) take myself so seriously as I perhaps come across. Then again, if I didn’t think it was important to expose and explore the absurdity and grotesqueness of the world, then I wouldn’t write what I do.

Sex, violence, profanity, gore . . . where are the limits? What are some of the ways you pushed those limits in Folly? What lines won’t you cross?

Hmmm. I don’t think there should be limits with writing; when I detail graphic sex, violence, and language in my work it’s not just to push buttons or envelopes, it’s because I’m interested in exploring, for lack of a less pretentious-sounding descriptor, the human condition, and for me that means detailing everything, the beautiful and the ugly, the brilliant and the idiotic, the nasty and the nice.

Now, I’m also of the mind that writers who do a poor job of handling potentially problematic elements deserve to be taken to task. Loudly. I’m personally disappointed by the amount of gratuitous, clumsily-handled sexual violence one finds in genre—it’s as if writers who set their works in a quasi-medieval milieu think that rape was as commonplace as belching in pre-modern societies. It’s just stupid and creepy and awful.

Your style is lush, but not self-congratulatory. It draws on the poetic end of pulp; there’s a delightful purple tint to your prose. Does each sentence come out in all its majesty or do you have to shape and edit it over time? I guess the question is, how much editing do you do line-by-line and otherwise.

Thanks! One critic compared my writing style to Garth Marenghi’s, which I suspect was meant as a barb but I took as a compliment—my more bombastic passages are decidedly tongue-in-cheek, which, again, is something that I think some readers overlook. To me, humor can be much more effective, sublimely so, when its part of the very structure of the piece, rather than being relegated to comic relief plot twists, dialogue, or, in extremely sad cases, punning.

As for how much revising goes into the prose, it depends entirely on the project, hell, it depends entirely on the passage. I’m stronger at initially getting words down than I am at revising them, which is not something I’m particularly proud of. Editing is hard business, and I have (almost) nothing but admiration for those to whom it comes naturally (there’s a healthy dash of bitter jealousy stirred up in there, too). I’d hazard that all of my novels go through about half-a-dozen drafts, with some of the final pages being similar to their first incarnation and others being significantly touched-up, if not totally scrapped. Some of my best lines, or at least my favorite ones, came out perfectly almost without my thinking them up, and others took a ridiculous amount of revising and revisiting before I got them where I wanted them to be.

I should add that one thing which I’ve tried to do less editing on over the years is dialogue. Too much time spent on dialogue leaves you with unnaturally clever conversations where everyone, no matter their personality or character, is constantly ready with a witty riposte, rather than only thinking of a good retort hours later, when it’s much too late to employ. Whedonesque dialogue can be fun, sure, but it rarely rings authentic.

How do you go about deciding who “gets it”? What impact does the death of a central character have on the novel?

The Folly of the World seems neither slower nor more languorous than The Enterprise of Death, but . . . more mature in some ways. What are some of the things you did differently in terms of pacing?

In Folly, the action and plot are of a smaller scale and greater intimacy than in either Enterprise or Brothers Grossbart, but the pacing is much brisker  . . . I hope! Life isn’t a series of exciting plot-points, after all, it has its own ineffable pacing that is almost impossible to predict or even keep track of—look away for a moment and you’ve lost all the time you thought you had, but pay too much attention and you’ll never get through a single difficult day. I endeavor to reflect that in my work.

So yes, pacing can be relative, and is too often conflated with plot. I’ve read novels wherein the fate of the world is being decided on nearly every page, and which are as tedious as a phonebook filibuster, and I’ve read novels wherein next to nothing of external consequence happens but which are totally gripping from cover to cover. I usually care more about characters than I do plot, and I think that my own writing reflects that—if you pick up one of my novels expecting to read ninety-nine cliff-hangers for every hundred pages, you’re going to be disappointed, because I try to make the priorities of the story the priorities of the characters, and that doesn’t always make for a thrill-every-page experience (though sometimes it does). Now, something interesting happens on every page, but that’s not always the same thing, is it? Pacing is determined by perspective, and perspective is determined by character, and as I give my characters quite a long leash (enough rope to hang themselves, as it were), so long as the reader finds the cast interesting, the pacing should feel neither rushed nor plodding.

You did a huge amount of research for Folly. How do you keep from getting buried under all that material?

I always bring a shovel and an exit strategy to the library. 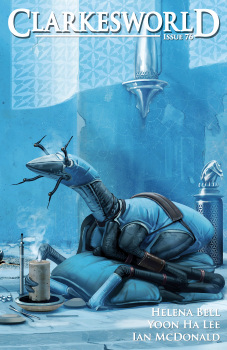