December is, as always, a mad dash of a month for me and it almost seems as though I can never get organized enough to avoid the post-holiday crunch. Issues of Clarkesworld and Forever need to be put to bed, my Best Science Fiction of the Year anthology needs to be turned into the publisher, and various other delayed projects need to be cleared from my desk. None of this was helped by the crisis Patreon, one of our major sources of income, manufactured—all on their own—earlier in the month. Ultimately, that situation was resolved, but not before it caused some damage to our bottom line—something I really didn’t need with the massive increase 2018 will bring to my health insurance premiums.

It may seem like I should be happy that 2017 is finally over, but there were a few high points like leaving my day job and all the interesting events I had the opportunity to participate in, including the two week trip to China I talked about in last month’s editorial. That said, I am looking forward to starting the new year with a slightly cleaner slate. While all that travel was quite enjoyable, it will be nice to have a few months at home, catching up on my to-do list, and spending more time with my family.

One of the things I’m celebrating this month is the third anniversary of our relationship with Storycom. Together, we’ve managed to bring a nice assortment of Chinese science fiction to the pages of Clarkesworld. It’s been a lot of fun and while I was in China, we spent some time discussing what we can do to build upon this nice foundation we’ve built. Last year, Storycom published Touchable Unreality, a bilingual (Chinese/English) anthology of the stories from the first year of our project. It’s only available in China and we had originally hoped to bring it here, but the market for bilingual books is too thin to be practical. Instead, we’ve decided to publish an anthology featuring the best of our first three years and use it to fund additional Chinese translation projects. I won’t tip much more of our hand at this time, but all will be revealed soon!

Speaking of special projects, one of last year’s experiments was to run a novella in Clarkesworld. Juliette Wade, the author of “Sunwake in the Land of Teeth”—last year’s novella—will return with another in a few months. I already have it in hand, it’s just a matter of finding the right stories to pair it with. When we run a novella, we need to have a few shorter works to pair it with. Being an online magazine we don’t have to worry about page limitations, but we do have to watch our budget. We aren’t revising our guidelines just yet, but that door will be swinging open sometime in 2018.

By the time you read this, I will have turned in the manuscripts for two 2018 anthologies: Best Science Fiction of the Year: Volume Three and The Final Frontier. In the next couple of months, I’ll begin reading stories for reprint in Not One of Us, my third 2018 anthology, which will be published late in the year. This one focuses on aliens on Earth and covers refugees, invaders, and tourists. An open call will follow my preliminary reading and be announced on neil-clarke.com.

I haven’t forgotten those Clarkesworld annuals either. Year Nine had to be tabled due to the end-of-year travel, but gets back into production later this month. Year Ten is in the preliminary stages and could follow a few months later. As I’ve mentioned before, these are two-book volumes now, so it’s taking a bit more work than originally expected.

As for travel, at this point, I only have a few things on my calendar:

I suspect there will be a few local events added and who knows what other opportunities will arise as the year goes on. Maybe I’ll see some of you at one or more of them!

Thanks for reading and Happy New Year! 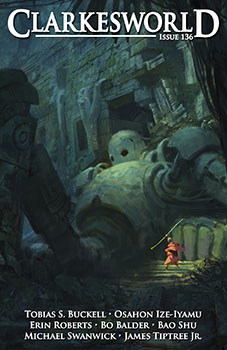