Editor's Desk: A Bucket of Things

Normally, I struggle to think of a topic for my editorials, but this month I have three things on my plate and none can really wait. I’m going to briefly cover all of them right now and cover some in detail when I have the luxury of some worry-free time.

Thing 1: That Whirring Sound From My Chest

Or beeping, actually. Yes, the alarms for the battery started and it is time to replace my defibrillator. However, in December, a second set of alarms went off and indicated a failure in one of the coils. This means that not only is the unit being replaced—that’s what happens when the battery dies—but I also need to have the wires that go into my heart replaced too. It’s a fairly unusual situation that I’ve over-documented on my blog (neil-clarke.com), but the short version is that my surgery will be more complicated and a bit riskier. I’m meeting with the surgeon in early January and should have further details then. It’s likely that the procedure will be done very soon. Nervous? Of course. Wish me luck.

Thing 2: Words From the Other Side of the World

In August 2011, we published our first translation, “The Fish of Lijiang” by Chen Qiufan, translated by Ken Liu. Over the next few years, we published a few more, thanks to Ken and John Chu. Unknown to us, those translations were generating some attention in China and one day, I woke to find an email from Storycom in my inbox. They liked what we were doing and were curious if we’d like to make it a regular feature.

Over the next few months, we hammered out logistics and a variety of rights issues. To make things work from our end, we launched a Kickstarter campaign to help fund the addition of an extra story slot to the magazine, so that translations could sit alongside English language stories as an expansion of our existing work. With Storycom and our Kickstarter supporters, we launched our translation project exactly five years ago this month. Since then we have featured nearly fifty works of Chinese science fiction.

It’s easy to think of things in a vacuum, but regularly publishing translations created opportunities not only for those authors, but us as well. In the years since, we’ve seen a significant rise in the number of translations and works by foreign authors in our slush pile and pages. There’s even a direct line between these efforts and the Korean SF grant we received from LTI Korea last year. (Speaking of which, this issue features the last of those stories. We’re still hoping to get funding for a second round.)

I’m extremely grateful to everyone at Storycom for their vision and support. Their commitment to this project has opened many doors, introduced me to some amazing people—many I now call friends—and helped make translations a less uncommon fixture in English language SF. I look forward to what our efforts will bring in this new decade. Thank you Storycom and thank you to all the authors and translators that have been part of this team as well.

It’s almost time to pick your favorite Clarkesworld story and cover art from 2019 in our annual reader’s poll!

Happy New Year! I hope that this year brings you only the best! 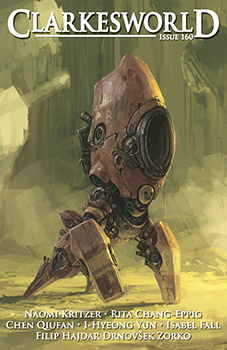