With the start of a new year comes the inevitable looking back at the previous one. Strictly by the numbers, here’s a quick snapshot of Clarkesworld’s 2021 output.

In preparation for our annual reader’s poll and awards season, here’s a detailed list of the stories we published:

For the purpose of the Hugo Awards, Clarkesworld is classified as a professional magazine. This has been the case for several years now, but there are still a few people who continue to nominate us for Best Semiprozine. While we appreciate the sentiment, we are NOT eligible for that award. Instead, if you want to recognize our work, please nominate our stories in the appropriate categories and/or nominate me (Neil Clarke) for Editor Short Form.

Our annual reader’s poll—where readers pick their favorite Clarkesworld story and cover art from 2021—is once again employing a two-phase process:

Happy New Year! May things only get better from here! 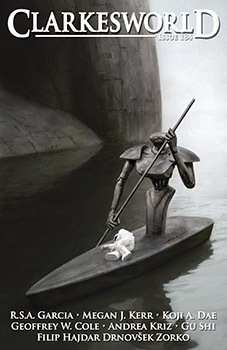