Editor's Desk: The Return of the Reader's Poll

It’s time to pick your favorite Clarkesworld story and cover art from 2017 in our reader’s poll. This year, we’re doing it a bit differently and running it more like a traditional two-round genre award.

At the end of January, we opened and held the twenty-four hour flash nomination period to identify the top five candidates in each category: story and art. The announcement was sent out via Twitter, Facebook, Patreon, and my blog. The brevity of this phase was an experiment. In theory, it would create a sense of urgency and reduce the opportunities for a coordinated ballot-stuffing campaign. It worked. The nomination phase generated more responses than the majority of our full surveys from years past and a significant reduction in stuffing—though there were some very clumsy attempts to do so, of course.

In any case, after tallying the votes, I’m pleased to announce this year’s finalists.

This month, you will pick the winners from the top five finalists. Everyone is welcome to participate regardless of whether or not they nominated in Phase 1, though.

Voting is open now at:

Thank you for participating. The winners will be announced in our March issue! 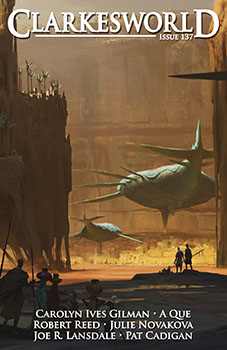