Since my heart attack last summer, I’ve been trying to come up with something that would show my appreciation for all the support I received from our readers. One obvious option is to continue to build upon and strengthen what we’ve created here at Clarkesworld. Last month, I mentioned our intention to include a fourth original story in each issue after we pick up our next five hundred subscribers. Behind the scenes, there was another project brewing: a reprints department. This has been on my “to-do” list for some time and last month, I asked Gardner Dozois to join us as our first reprints editor.

While an introduction probably isn’t necessary, there may be some readers that are not familiar with his work. Gardner was the editor of Asimov’s Science Fiction for almost twenty years, and also edits an award-winning annual anthology series. The Year’s Best Science Fiction, has won the Locus Award for Best Anthology sixteen times, more than any other anthology series in history, and the title is now celebrating its twenty-ninth year. Gardner has won the Hugo Award for Best Editor fifteen times, won the Locus Award thirty-five times, including an unprecedented sixteen times in a row as Best Editor, and has won the Sidewise Award and two Nebula Awards for his own short fiction. In 2011, he was inducted into the Science Fiction Hall of Fame.

Starting in April, each issue will feature two reprints selected by Gardner. That means five stories per issue (and in the podcast) with hopes of a sixth on the horizon. I hope you enjoy this latest addition to our magazine. It feels great to be able to do this.

The Science Fiction and Fantasy Writers of America (SFWA) recently announced the 2012 nominees for the Nebula Award and Clarkesworld stories received more nominations than ever before:

I can’t begin to describe just how happy it makes me to see four stories from Clarkesworld on this year’s ballot and it is made even sweeter when I look at this in the context of all of the health difficulties I had last year.

Congratulations to our (and all the other) nominees! For a complete list of nominees, please visit sfwa.org.

Speaking of awards, if you are nominating in this year’s Hugo Awards, you have until March 10th. I’m still receiving questions from readers about this, so yes, Clarkesworld is eligible for Best Semiprozine and I’m eligible for Best Editor, short form. If you are considering  voting for us, or already have, thank you for your support. It means a lot, no matter what way the final ballot turns out. Thank you. 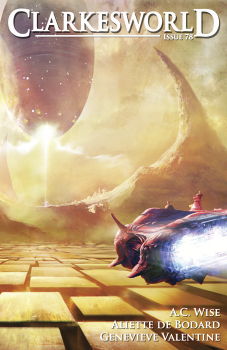