Spring is finally here in NJ and I can once again bear to go outside. For a while there, it seemed like the winter would never end. I spent a lot of time by the fireplace working on a variety of projects and it’s only come to my attention today that I neglected to tell you about one of them. Sometime in 2016, Night Shade Books will be publishing my first year’s best anthology: The Best Science Fiction of the Year, Volume 1.

As a short fiction aficionado this promises to be a lot of fun and more than a little intimidating. I already read a lot of stories, but now that pile has grown significantly. It walloped me even more when I realized that the last editor to use this title was Terry Carr. I have those books on my shelf and they were a regular part of my annual reading for a long time. No, no pressure there.

It’s a complete coincidence that I launched Forever Magazine earlier this year, however. If the book deal came in just a bit sooner, I might have delayed that one a bit, but in retrospect, a reprint magazine makes a great companion project for a year’s best series. It might also give people an early impression of what that series will be like as my tastes run a bit broader than I might normally consider right for Clarkesworld. Do I have you interested? Good. Check out forever-magazine.com for more details or subscribe via Amazon, Weightless, or B&N (soon).

If that isn’t enough, I’m also well into the planning stages for my next original anthology. I’m not sharing any details yet as I haven’t decided whether or not I should pitch this to a publisher or handle it myself. There is a certain attraction to having someone else handle publication, particularly since I’m juggling all these projects on a part-time basis. That said, I make more going the direct route and that might just help me move towards full-time.

I should probably get back to work now. 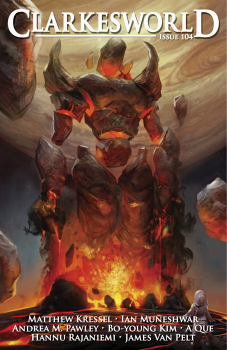