Award season is once again upon us and I’m pleased to have some good news to share with you.

Early last month, we received the news that two Clarkesworld stories are finalists for this year’s Aurealis Award: Grace Chan’s “He Leaps for the Stars, He Leaps for the Stars” (Best Science Fiction Short Story) and Samantha Murray’s “Preserved in Amber” (Best Science Fiction Novella). This award recognizes the achievements of Australian science fiction, fantasy, and horror writers and we’re thrilled to see both of them on the ballot. The winners will be announced on May 28th.

Only a few days later, the Hugo Awards were then announced. We are very pleased to see Suzanne Palmer on the ballot with “Bots of the Lost Ark”, the sequel to her Hugo award-winning novelette, “The Secret Life of Bots.” We’re cheering on Bot 9 and the crew! The Hugo winners will be announced during a ceremony on September 4, 2022, at this year’s Worldcon

To cap off the month, this year’s Ignyte Awards included “Philia, Eros, Storge, Agápe, Pragma” by R.S.A. Garcia in the Best Novella category. We’re very happy to see her work receiving some (in our humble opinion) overdue recognition. Winners will be announced at a ceremony on September 17th.

In addition to celebrating our finalists here at Clarkesworld, I was also chosen by many of you to be recognized on the Hugo Award ballot for Editor Short Form. This will mark my tenth nomination in that category, and though I’ve not brought home the award just yet, win or lose, I still get to do a job I love, working with so many amazing people.

Ten years ago, I was supposed to go to Chicago, attend Chicon 7, and celebrate being a Best Editor finalist for the first time. I was looking forward to spending that time with friends and colleagues. Before that could happen, I suffered a major heart attack that should have killed me. I never made it to Chicago and instead received my anticipated loss among loved ones at home.

It amuses me that my tenth nomination happens when Worldcon is set to return to Chicago for Chicon 8. It’s like getting a second chance to do something I missed out on, but with a little more experience and a healthier perspective. That heart attack completely reshaped my outlook on life and changed my career path as an editor. It’s weird to say, but I’m better for it. I’m a nine (and maybe soon to be ten) time loser, but my real bar for “winning” involves waking up every morning. Should the Hugo winds blow my way this year, it will be a cherry on top and a nice way to cap off fifteen years of editing Clarkesworld.

In the end, I’m particularly grateful that people think I’m ever worthy of the honor: past, present, or future. It makes me happy that people appreciate the work we do here. I see this as an honor as a testament to what we are trying to achieve and a reflection on every author I’ve ever worked with. My career would be nothing without them and the team of people behind me, so this nomination is theirs too. 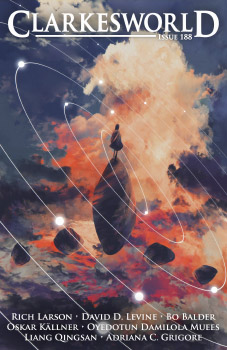