Editor's Desk: Once Again Down the Rabbit Hole

There isn’t a month that goes by where someone doesn’t complain about how publishing is stacked against them. Last month, I stumbled across a Facebook discussion about a few men who felt oppressed by the existence of an all-female anthology. Usually, that’s enough for me to just scroll on by, but before doing so, I noticed a comment by Ellen Datlow:

The only difference between all female and all male anthos is that the former are created deliberately and the latter are created out of negligence.

That’s probably the most accurate and level-headed comment I’ve ever seen in one of these discussions. Smart statements can get you thinking and this one did.

In the past, we’ve run articles and editorials that have looked at slush pile and publication statistics for short stories. For the most part, things tend to fall around seventy percent male and thirty percent female. Subconsciously, I’ve always figured those percentages could safely fluctuate by plus or minus ten without drawing much negative attention to a market. The further you go beyond that range . . . someone eventually gets offended for right or wrong reasons.

So why is it that my own magazine regularly drifts well outside those expectations? Several times our annual breakdown has been nearly seventy percent female. What’s up with that? It certainly wasn’t deliberate. Is it an indication of a grand conspiracy? Do we have something to fix? Down the rabbit hole I went.

Before I go further, I’d like to acknowledge two things:

I’ve been speaking about gender in a strictly binary sense. I know that some people would like to see this broken out to include more genderfluid options, but the dataset for that group is small enough (frequently much less than three percent in our samples) that I’m uncomfortable using it to make any meaningful observations.

Also, every time I start a discussion like this, I feel the obligation to remind people that editors select what they think are the best stories for their publication. This is a purely qualitative assessment. Looking at the slush pile quantitatively can let you know if you have to start actively soliciting stories from an under-represented group, but it shouldn’t be used to determine what your final ratios should be. If seventy percent of the stories come from one group, it doesn’t necessarily mean that seventy percent of the best stories will also come from that group. Talent (as perceived by the editor) tips the scales.

To date, I haven’t been able to come up with a satisfactory explanation as to why our final selections have tilted the way they have. The best I could state was that it appeared that female authors had a better handle on what we were likely to publish. Maybe the best male authors were busy sending their stories elsewhere. Maybe the best female authors were sending us their stories first. Maybe it is created out of negligence.

I recently took some criticism from another editor for refusing to define what makes a Clarkesworld story. I’ve called it a moving target, something that makes me think, and even a pleasant surprise, but I’ve never seen the point in trying to nail it down. Since I’m the qualitative filter that appears to be skewing the system, it occurs to me that they may be right. That could have value.

I’ve been avidly reading short stories for over thirty-five years. I can’t even begin to estimate the number of works that encompasses. The same old thing bores me. I reject a lot of good stories simply because they are too familiar and I don’t mean that they are plagiarizing or even very similar to other stories. It’s just that they follow the same formula. It’s a trip to the old neighborhood: pleasant and predictable. That’s not what I want. What I want is to be taken somewhere new or somewhere old in a new way.

So, after some time, I came to the conclusion that my own history is to blame. I’ve lived through a time where the overwhelming majority of short stories were written by white men and there’s absolutely nothing wrong with that. It does mean, however, that those are my anti-influences. Those are the people you have to beat. Those are the people you have to be different than.

So, my grand theory of why I’ve published more women than men is that we probably don’t share the same influences. That same theory may be true for younger or foreign authors as well. I’m looking for science fiction and fantasy that takes me somewhere new. These groups might just have an advantage in that department.

While that’s a rational theory, I had absolutely no data to back it up, so off to the internet I went. I started a short survey, expecting to attract maybe one or two hundred participants. At the end of three days, it was almost nine hundred and fifty.

Authors are terrible spellers. It took three days to get the data into a state that I could use for analysis. Fortunately, there were only a few entries that needed to be tossed because they were either too vague or accidental double submissions.

So who are the most influential people in short fiction? 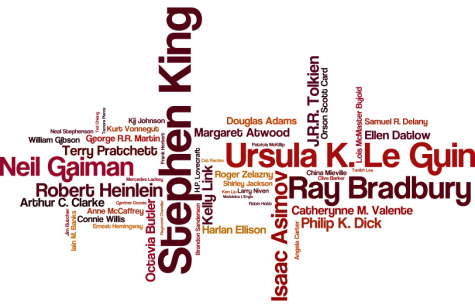 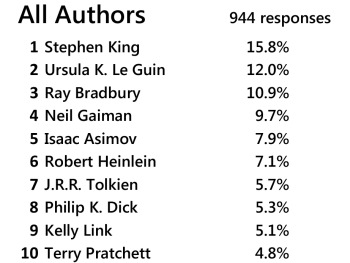 The list changes only slightly if you remove the unpublished authors,

but when you break that group down by gender, it indicates that men lean more towards the traditional/classics and women have more diverse influences. There’s only a forty percent overlap (King, Le Guin, Gaiman, Bradbury) between the two groups and women are less likely to have been influenced by those authors than their male counterparts.

Let’s take a look at the responses from Clarkesworld authors.

Next, I pulled apart the data by age and gender. 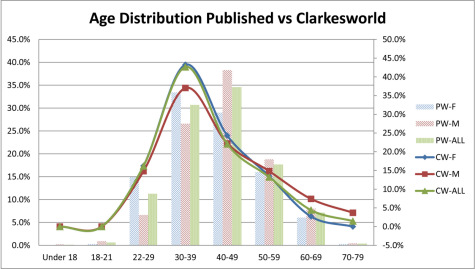 As you can see from the age distribution chart above, our authors skew a bit younger than the majority of those participating in the survey. That blip in the 70-79 and Under 18 ranges has more to do with the sample size and should probably be ignored.

Common sense says to me that the younger authors are going to have a different set of influencers than the older ones, but what wasn’t clear to me before digging into the data was that gender magnifies that break from the past. Take Heinlein, Asimov, and Clarke for example. You won’t find any of them on the top ten lists for women under fifty, but one or more is on every top ten list for the men across all ages. In the Clarkesworld lists, only Asimov makes an appearance in the men’s list. Even King’s influence is barely present in the Clarkesworld lists and overall, his impact is barely felt on the top ten for all women under forty. In their place, Gaiman, Valente, Pratchett, and Butler rank high.

Breaking the published group into foreign and American authors resulted in the following: 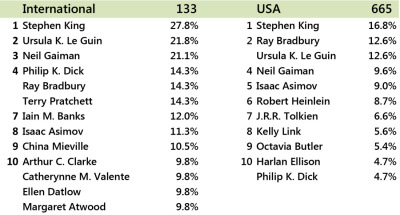 I expected more variation from these lists, but I suspect that the sample size from outside the UK/Canada/Australia block was insufficient to overcome their influence. I’d love to do another survey with non-English speaking writers sometime. It might be interesting to see how influential English language works are outside our bubble.

So far, I’ve dropped a lot of data on you, and trust me, there is a lot more. I’ve pulled and prodded at this data trying to assess whether or not my past is influencing what I publish here. With rare exception, I’ve read books or stories by everyone mentioned in these lists. Some had greater impact on me that others. Clarke, Heinlein, Asimov, Le Guin, and others of that age made up a good percentage of my reading up into high school when I discovered Omni. In college, I started reading more Ellison and Dick, reading Asimov’s and Fantasy & Science Fiction, and crashing into cyberpunk with Gibson and Cadigan. It went on from there, but as I go through the lists in my head, I can see that it’s all been a progression, always moving forward.

It appears as though I do have a considerable bias. It’s not towards a specific gender, race, creed, or nationality. It’s towards those that have a more varied background than I. If you write the perfect Heinlein story, good for you, but I’ve been there before and quite often. Enjoyed the trip, but it doesn’t belong here. The data seems to indicate that without previously defining what a Clarkesworld story is, I’ve kept true to a goal to take us down a different (to me) road.

Now, this revelation may depress a number of people who are trying to get published in Clarkesworld, but if anything, it should encourage you to break out of your comfort zone. Clarkesworld is a safe place for that and it will be that way as long as I’m around to influence it.

With Clarkesworld, I don’t want to look back. It’s not a slight against the people who influenced me. It’s in honor of them. They made me this way. Look to the future. Discover new things. Escape. Enjoy. 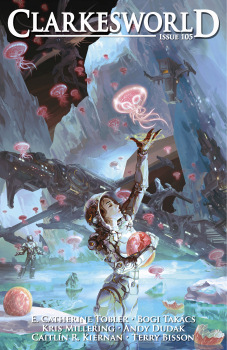