Editor's Desk: In My Own Way

Every story—and editorial—starts with a blank screen. I’m one of those people who is tortured by that field of white. In its presence, all my ideas fade to nothing. I used to think that public speaking was my nemesis. I still don’t like it, but at least there I have someone to bounce off of and I can’t fall back on the delete key. This is probably another good reason for me to avoid time travel or temporal rewinding: I’d put myself in an endless loop of revision and freezing.

One of the main reasons I continue to do these editorials, though, is to break the cycle. I have this strange belief that one day the words will just flow. (I can hear the authors in the room laughing hysterically. Please permit me to have my delusion in peace.) Even if I don’t have that breakthrough moment, this journey will help me become more comfortable and confident with my words.

In many ways, lacking that skill has helped me as an editor. It makes me have even more respect for the talent of the people behind the stories that land on my desk. It’s also one of the reasons I find negative review bloggers so distasteful—they use that skill to promote themselves at the expense of others. I’d much rather take the high road: move on, find something you like, and then celebrate it.

I’ve discussed this before in previous editorials. If we want short fiction to thrive, we have a responsibility to spread the word and promote the works we’ve enjoyed. There are many ways to do this, but it needs to be focused, respectful, and timely. More specifically, it needs to be done in locations that are relevant to the audience you are trying to attract. Your blog is nice, but adding Twitter or Amazon might have a bigger impact.

Reviewing isn’t for everyone, mind you. I really wanted to do my part and find a way to contribute to a positive conversation about short fiction. I tried writing reviews. The blank screen tormented me and it took a while to realize that I wasn’t following the path that best utilized my skills. Instead, I changed tactics and launched Forever Magazine as a way of bringing back some of the stories I’ve enjoyed. When I go full-time this year, I hope to be able to do a bit more with that project.

Not long after announcing Forever, another opportunity to celebrate short fiction fell into my lap: Night Shade Books offered me a contract to edit a new year’s best anthology series. The first volume of The Best Science Fiction of the Year comes out this month. It’s been an intimidating project, but one I’m quite proud of. Here are the thirty-one stories included in the first volume:

I hope you’ll consider buying a copy, having your library get it, or at least tracking down some of those stories, and if you do, please let me know what you thought of them. Or, better yet, why not keep the momentum going and tell a friend! 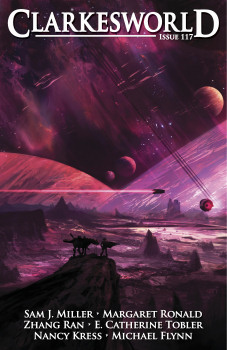