Cavemen Discovered in the 21st Century

I’ve recently been following a disturbing discussion that is taking place on a major genre magazine’s forum. It all started when Jonathan Strahan, a respected anthologist, publicly apologized for not including enough women in Eclipse 2, an anthology to be published later this year. In the days prior, there had been considerable outcry about this from both women and men. Under ordinary circumstances, his table of contents wouldn’t have attracted much attention, but with the prior book in this series, the publisher, Night Shade Books, featured only male names on the cover despite the book’s relatively gender-balanced table of contents. That decision led to months of discussion, culminating with a panel at Wiscon, a feminist science fiction convention. It was at that panel that the publisher promised to right that wrong with the cover of the next volume. A few weeks later, the anthologist announced a nearly all-male table of contents.

Let’s jump back to today. At the time I’m writing this, there are nine pages of chatter about this apology in a thread called “Strahan caves to the PC Nazi Brigade,” almost all of it by men who feel he should have put those women in their place. After all, they want the “best stories” and if that means cavemen only, well God Bless America! We don’t want no stink’in emotional air-headed girl cootie drivel in our science fiction!

Dear lord, people like that do exist. I think I must live a sheltered life or perhaps I just hang out with a better quality of people. No one I know ever behaves like that. Seeing this gives me a much better appreciation of what women and minority authors have to put up with.

Do anthologists and publishers have an obligation to women and minorities? Absolutely. Does that mean taking lesser quality stories based on race, gender, sexual orientation or ethnicity? Absolutely not. This is about being a market that is friendly. If all you get are stories from white men, maybe you need to do some outreach and get a more diverse body of people submitting stories to you. Or perhaps you’ve done something to scare them away. If you were or are a minority, would you send a story to a market that supports or promotes individuals like some of those on that forum?

One argument I see presented is that a more diverse pool of writers will change the personality of the publication. It’s ironic that a forward-looking genre can sometimes be so rooted in its ways. “But you might scare away the readers!” Wake up. The readers are already leaving. Yes, you might upset a few die-hard white supremacists, but a publication that represents a more diverse body of people may just appeal to a more diverse body of people. You might actually attract more readers. The fact of the matter is that the editors are responsible for the personality of a publication. Just because they’ve made an effort to attract a more diverse author pool does not mean that that publication will suddenly dip in quality and become a “market for women and homosexuals.” It means that they actually are trying to find the “best stories.”

Not everyone taking part in that discussion is a caveman. On occasion, there are much more enlightened viewpoints being represented, but neither side is likely to prove the other wrong. Like politics and religion, this is something that people cling to with a passion. Our worldviews demand that we can’t be wrong. Was that anthologist wrong to apologize? I don’t think so. There was an expectation of both him and his publisher, and that expectation was not met.

What’s your opinion? Was he right to apologize? Can a magazine or anthology embrace diversity without harming itself? Who are some of the authors that prove your point? Do you pay attention to the table of contents when selecting what you’ll buy? 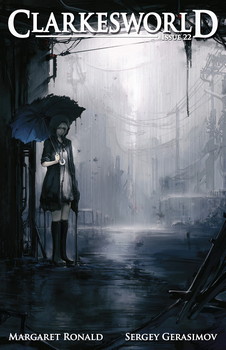