Editor's Desk: From the Moon to Magazines

I have two anthologies being published by Night Shade Books this month: The Eagle has Landed—a retrospective of lunar science fiction published since Neil Armstrong became the first person to set foot on the Moon—and The Best Science Fiction of the Year: Volume Four. Each project was a unique learning opportunity, one looking at history and another looking at the state of the field as it is today.

The Moon landing was fifty years ago this month. That’s the milestone that drove the initial concept for The Eagle has Landed. I was a very young child at the time of the landing and have no real recollection of the event, aside from the stories my dad told me. Several years later, I started to read science fiction and devoured everything I could get my hands on. I wasn’t paying attention to when the stories were published or engaging much with the historical context in which they were written, so the research phase of this project was a bit surprising.

By the time Apollo 11 had the eyes of the world, science fiction had abandoned the Moon and started spending more time on Mars, the asteroid belt, and beyond. If you listen to Walter Cronkite’s news broadcast from that night, with special guests Arthur C. Clarke and Robert A. Heinlein, you’ll hear what sounds like science fiction—lunar colonies, space-born children, etc.—talked about as inevitable before the end of the century. Editors and authors of the time pulled away and moved onto more science fictional pastures, leaving a significant shortage of lunar sf in their wake.

Even after we abandoned the Apollo program a few years later, the science fiction community saw this as only a temporary setback. It would be nearly twenty years before the Moon slowly started receiving the attention it deserved again. At twenty-five, there were a couple of anthologies, but it’s only more recently that it’s become a common destination again. Interestingly enough, we’re once again talking about sending astronauts to the Moon. I can’t say that SF is responsible, but I can hope that this time, both SF and reality don’t abandon Luna again. In some ways, I think they need each other.

While Eagle had me diving through fifty years of history, my annual Best Science Fiction of the Year series keeps me rooted in recent events within our field. In honor of Gardner Dozois—who we sadly lost last year—I endeavoured to carry on some of the aspects of his annual review in my own, so this year’s introduction is considerably larger. For thirty-five years, Gardner captured  invaluable historical information in his introductions and as the only SF-only year’s best volume this year, I felt compelled to make sure there wasn’t a gap in that history. While I will certainly never compare myself to Gardner, I wanted to make sure his legacy was preserved.

While I was on Twitter talking about this introduction, M.L. Clark asked about the “different roles/audiences for editors whose columns either forecast or summarize the State of SF,” citing Gardner as the latter. I hadn’t really thought about it that way before, but quickly realized that I do a bit of both. In my former career, I regularly looked at the technology trends and determined how it would impact or influence education over the next few years. Toss enough data at me and I’ll automatically start looking for trends and offer a projection on where it all could take us. Speculating on possible outcomes, in some cases, can warn us about potential pitfalls and perhaps avoid them.

In my first volume, I speculated on the state of the market, based on economics, and described the market as oversaturated when compared to the number of paying readers. Instead of focusing on the things I said that could help prevent a potential market correction, some editors and writers were quick to jump to defend the status quo, accusing me of hating on hobbyist markets and even wanting to eliminate competition. It’s easier to throw stones than to fix the problem, or sometimes even admit that there is one. I get it, fewer markets means fewer opportunities. No one wants that. However, when market growth is out of step with overall readership growth (or fractured it into tiny amounts) it can be to the detriment of both the professional and hobbyist. That’s not healthy.

This year we saw some of that market correction with the closure of a few beloved markets. It’s something I intend to talk about in next year’s introduction and, fair warning, I don’t think it’s over yet. In this year’s introduction, I observed that the shortage of paying readers still exists, but also that we have a bigger problem: we’ve devalued short fiction. As someone who publishes short fiction for free online, I fully acknowledge my complicity in this problem.

The expectation that all stories should be available for free didn’t exist thirteen years ago when we launched this magazine. We certainly weren’t the first, or only publication, to do that, but we definitely contributed to the problem. The explosion of the short fiction market has only exacerbated things. And, no, I don’t think this is evil. I don’t want to abolish the practice. The benefits of making stories more widely available regardless of the reader’s financial means is partially responsible for the resurgence of short fiction. In many ways, this aspect of our community is facing the problems long observed by PBS and public radio. Perhaps we can learn something from them, but part of me believes that they face the same ratios (supporting/non-supporting) that we do. Watching things as closely as I have, I’m not convinced that, with that ratio, short fiction can grow its audience fast enough in the short term to help offset any further market corrections.

The depressed value of short fiction is reflected in more than just paid readership. It’s also reflected in how much we charge for it. The average monthly digital subscription is between $1.99 and $2.99. Compared to other works of literature in our field, we’re selling ourselves short. Adjusting the range to $2.99 and $3.99, would bring things more in line and provide an immediate boost to the market. Of course, money doesn’t solve the problem if it’s managed poorly. Historically, the natural compulsion for many has been to increase content, when in most cases, it should go to improving compensation for the authors, artists, and staff of the publication. Everyone agrees on “pay the author” but “pay the editor” and “pay the proofreader” and “pay the slush reader” need to become more common for the overall health of the field. Heck, even “pay the author” is way too cheap at the moment. We can and should address that.

So, Neil, why don’t you just raise the rates? That’s the problem with perception. With roughly 90% of readers thinking stories should be free and 10% trained to think that the existing rate is the fair rate, it doesn’t matter what we think it’s worth. First, publishers must make the case for the value of what readers are receiving. It’s a slow process that requires a lot of transparency, data, and even a little faith. Without that preparation, the first market to do it could find itself with a considerable drop in readership, possibly putting it out of business. If a bunch of markets do it at once, claims of price-fixing could be made. None of that is good for authors, readers, or publishers. Once again, I’m speculating. I see this as a potential path forward for all types of magazines and perhaps even one that can prevent a few from having to close. Who knows, it could even allow for some growth. When? Your guess is as good as mine, but consider this editorial a first step. Let’s talk about it.

In the end, this is a very interesting time in the history of SF/F magazines. We have an amazing variety of content and communities engaged in moving the field forward. I’ve said it before, but it bears repeating: I want to see the market thrive, not just survive. Is that such a bad thing? The short fiction market is still very much a house of cards with a few a bit more anchored than others. People might not like hearing that, but ignoring the situation certainly won’t stop the wind from blowing it all down. With so many smart and capable people in this field, we certainly can do better. 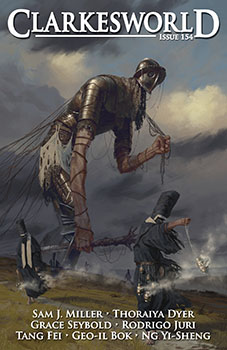