In October, Clarkesworld will celebrate the fifteenth anniversary of its very first issue, but for those of us behind-the-scenes, July (the seventh, to be precise) is where it all began. I was set on this path after a late-night conversation about the state of online fiction with Sean Wallace at Readercon. If you know your history, the state of things at that time could be best summarized as “in disarray.” There was very little respect for the medium and even less stability as markets came and went with high frequency. The closest thing to a success story, SciFiction (edited by Ellen Datlow), had recently announced that it was ending.

It’s on that backdrop that a publisher (Sean) and a bookseller/academic technologist (me) thought they could make something work. Naturally, people thought we were fools and told us we’d be out of business in a year. Honestly, I think that only encouraged me. We shocked everyone (including ourselves) by breaking even in our first year. We passed our second year and restructured. One issue at a time. Every month. Every month. We breathed for a moment and realized ten years had passed. We were stunned. Now it’s fifteen and I almost didn’t notice. I’m serious. I just realized a couple of hours ago that it was almost July and what that meant. Damn. We weren’t really supposed to make it this far. We didn’t even think we would.

While you’ve seen or heard the work by our artists, authors, translators, narrators, and perhaps some of these people over the years, most of what goes on at a magazine remains unseen by our readers, so this is the staffs’ month to celebrate. They’ve all played a part in keeping the wheels turning, one day at a time and against the odds, towards this big milestone. Thank you! 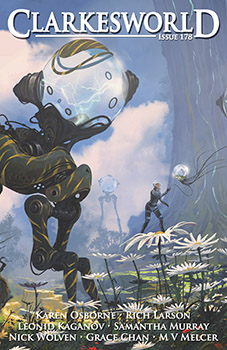