Like some of you, I’ll be heading off to Worldcon this month. I missed last year’s convention in Australia, so I’m looking forward to the long weekend in Reno, Nevada. Renovation has sent me my schedule, so I thought I’d share a little of what goes on there and perhaps entice anyone attending to show up at a few of these:

Politics drove me away from conventions and fandom for about ten years. When I returned, I decided that I would have nothing to do with that game, but then someone decided to try to eliminate the Hugo Award for Best Semiprozine based on misinformation and insulting grounds. I am a long-time supporter of semiprozines, friends with many of the people that run them, and more recently, fell into that category thanks to this magazine. After the proposal was defeated, I volunteered to be part of the group that redefined the category. At the business meeting, a new proposal for revising the boundaries of semiprozine and fanzine will be submitted by our committee. Several members (and others) will be on-hand to discuss.

I’ll be there to cheer on the three Clarkesworld artists that are finalists for their work on our covers:


Fri 15:00 - 16:00, Reading: Clarkesworld Writers (Reading), A16 (RSCC)
Clarkesworld Magazine is approaching its fifth anniversary. Some of the best from its writers.

If all goes as planned, I’ll have this one recorded and ready to share with you next month.

A KaffeeKlatsch is unstructured time with convention guests. Generally, attendance is limited, so you need to sign up in advance. Worldcon is a huge event. While I don’t mind chance meetings (feel free to talk to me if you see me staring off into space), this is a pretty good way to catch me.

Sat 20:00, Hugo Awards: Peppermill Tuscany
The Hugo Awards, presented annually since 1955, are science fiction’s most prestigious award. The Hugo Awards are voted on by members of the World Science Fiction Convention, which is also responsible for administering them.

Clarkesworld is a nominee in the Best Semiprozine category this year. We won last year, so perhaps we have a chance again this year. “The Things” by Peter Watts (Clarkesworld, January 2010) is one of the four nominees in the short story collection. In the event that Peter wins, I’ll be accepting the award on his behalf. Wish us luck!

This should be fun. Aside from publishing ebooks, I’m also a freelance ebook designer. You might say that I have a rather pointed opinion on this subject.


Sun 12:00 - 13:00, The Changing Short Fiction Market (Panel), D04 (RSCC)
In the 1930 and into the 1960s, almost all short stories were sold to the magazines. In the 1960s, original anthologies grew in prominence. Today, we still have print magazines, and numerous original anthologies, but we also have a growing electronic marketplace. The panel looks at the diverse short fiction market, from the perspective of editors, writers, and readers.

There are some great people on this panel with me. From the looks of things, I’ll be the one representing the online publications. I’ll have to remember to bring my analysis of the Locus Recommended Reading list. I’ve been monitoring that for a few years and it has been interesting to observe their perspective on where the best short stories are originating.

I hope to see some of you there. If not, have a great month! Next month, I’ll focus on one of these subjects in my editorial. If you have a preference or specific question, leave a comment on our site or drop me an email at neil@clarkesworldmagazine.com. 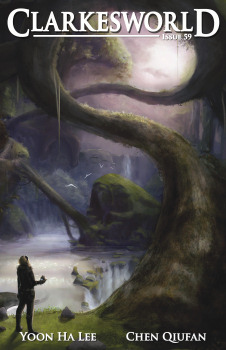