Editor's Desk: Aristotle Would Be Disappointed

At the 2008 Worldcon, a motion was put forward to eliminate the Hugo Award for Best Semiprozine. Several people, myself included, registered our disagreement with the proposal at the time. We demonstrated both the range and quality of work being done by those publications while acknowledging that there were flaws in the current criteria for the category. Due to that intervention, the category was saved and in 2012, new rules to address the flaws were ratified at the WSFS Business Meeting during Chicon 7. Those rules are still in effect today.

This year, several motions for new amendments have been put forward and once again, Best Semiprozine is threatened. I’d like to talk to you today about proposal F.5 Short Title: An Aristotelian Solution to Fan vs Pro. This amendment seeks to replace the 2012 definition for professional:

3.2.X: Professional activity shall be that which was undertaken with the expectation of sale or other direct profit (by the creator or any co-creators), or which can only be accessed after a payment is made (other than incidental fees, e.g. convention membership fees).

3.2.Y: Non-professional activity shall be that which was not undertaken with the expectation of sale or other direct profit (by the creator or any co-creators), and which can be accessed in a full and final version without any payment.

3.2.Z: All activity shall be considered either Professional or NonProfessional. In cases where there is some doubt as to which category applies to a given work or activity, the will of the nominators should be considered, as should the greater need to protect fan (non-professional) activity against professional activity than the reverse.

These changes effectively eliminate the semiprozine category by declaring that no such markets exist. The new bar for “professional” would sweep every finalist and long list nominee from the last ten years into professional status. I’m unaware of a single publication that would remain or become a semiprozine under the proposed definitions.

I was a member of the committee that drafted the current version of 3.2.11’s definition of professional and will freely admit that it’s not pretty. Some have argued that Worldcon shouldn’t have to ask for financial records, but that was never the intention. Prior to announcing the finalists, each finalist is contacted and asked if they a) meet the eligibility criteria and b) accept their nomination to be on the ballot. Just as we are willing to trust “the will of the voters,” we trust the finalists to be honest.

When the rule went into effect, several publications, including Locus, acknowledged that they were now classified as professional. Over the next few years, several other publications, Clarkesworld included, announced that they were no longer eligible due to this clause. No publication has even had their status officially challenged by WSFS or Worldcon and the intent of the committee has been reflected in the nominees. As with story categorization (short story, novelette, novella) based on length, voters often find out what the appropriate category is courtesy of being told by the author or publisher. It is no different with semiprozine.

Since 2013—the first year the new rules applied—there have been four different winners and nineteen different finalists. Those are better numbers than the decade leading up to the challenge, but perhaps a bit disappointing to people in some circles.

That said, we shouldn’t try to legislate variety. Hypocrite! I hear you cry. The rules pushed Locus out of semiprozine! Well, yeah, and semiprozine was initially created to get Locus out of Fanzine. The point of those rules changes wasn’t to legislate variety, it was to relevel the playing field. For years before the 2012 rules change, Locus had an office with full-time staff and benefits. The resources at their disposal were significantly beyond the publications they were competing against, including all the magazines that have since followed them into graduation from the category. If you don’t believe that having staff earning a part-time salary is an advantage over those that don’t, how can you say that someone paying pennies for an article gives them an unfair advantage over traditionally unpaid fanzines? Why not put them all—professional through fanzine—in one bucket in that case? (I am in no way advocating such a thing.)

There is important work done at the fanzine, semi-professional, and professional levels. Each is worthy of acknowledgment and recognition. Some of the publications being nominated may never move up (or down) from their current weight class. Some may decline nomination, and in doing so, make room for someone new on the ballot. Over time—longer than you may be happy with—perennial finalists or winners will be challenged as new venues rise through the ranks and into prominence.

This isn’t unique to these categories. How many complaints have you heard about the number of Doctor Who episodes nominated or any of the other epic runs the “will of the voters” has placed on previous ballots? If you want to do something about variety, then, find the works that you think are better and celebrate them. No, not with the campaigning that seems to be increasingly tolerated, I’m talking about you, voting, telling friends, growing their communities of fans. It’s not just about the awards. They may or may not follow, but the extra attention your support brings to them does have value. It’s all part of celebrating the work.

When the 2012-ratified changes were being hashed out by the semiprozine committee, we deliberately tested our various drafts against a series of real and imaginary markets. The entire reason for part two of our definition of professional was to close a very specific loophole: a wealthy patron. The weight classes need to be maintained when something like Tor.com, Sci Fiction, or an imaginary free Google SciFi Magazine is dropped into the pot.

As I read it, not only does this new rule eliminate all semiprozine finalists, it removes the ability to protect the categories from well-funded sponsored projects that have no “expectation of sale or other direct profit” and “can be accessed in a full and final version without any payment.” There’s no denying that such a venture would have an unfair advantage. It also further demonstrates a significant gap in their analysis of how this change would impact the categories.

With that said, I strongly urge the sponsors of “An Aristotelian Solution to Fan vs Pro” to withdraw their proposal and rethink their approach. Your intent is unclear, but I’d like to believe that these results aren’t what you had in mind. The magnitude of these problems is so significant that it shouldn’t be resolved with last minute amendments at the business meeting. To do so would be disrespectful to the impacted publications and their fans. They deserve the opportunity to fully understand the ramifications of your changes and time to provide a proper response, which is why WSFS bothers publishing this information in advance in the first place.

On a lighter note, maybe you can replace this proposal with one to ditch the clunky portmanteau and finally call semiprozines, semi-professional magazines? 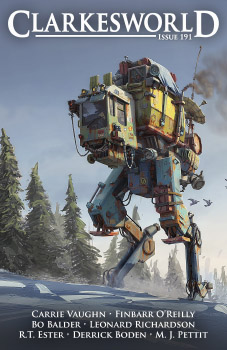