We were told we wouldn’t last a year, but here we are at our fifteenth anniversary issue and I have to say that it feels really good. To be fair to our early critics, the landscape for online fiction was more like a slaughterhouse back in 2006. While a lot of that was simply poor planning, a significant part of the problem was the lack of infrastructure to support such activities. Digital subscriptions, Patreon, Kickstarter, membership software, and most of the mechanisms that fund online fiction today simply didn’t exist and there were far fewer people reading online. Advertising? You’d be lucky to get pennies. That’s not to say that no one succeeded. Corporate funding, wealthy patrons (sometimes the editor/publisher), and other charity models existed, but had problems of their own. In fact, if it were not for the collapse of one corporate-funded publication, SciFiction, Clarkesworld may never have existed.

At the time, I ran Clarkesworld Books, an online bookstore. My passion for short fiction manifested itself there as a very large magazine section of over a hundred titles. Sometime in 2005, I started offering publishers the opportunity to include free sample stories on our website as a means of promoting magazines to our customers. In July 2006, I met up with Sean Wallace (then editor of Fantasy Magazine, one of the publications I was working with) at Readercon and we started discussing the impact of that experiment, the recent demise of SciFiction, and a post-mortem on several of the other recent losses in online publishing. A few hours later and sleep-deprived, we had a business model in mind and we decided to go for it. By the end of the weekend, the magazine was fully-staffed and three months later, our first issue dropped.

Issue one of Clarkesworld, like all the issues from our first year, contained two stories of less than four thousand words each and a cover. We paid well-above market rates and the slim contents were to keep our budget in-check. The startup money came from my marketing budget for the bookstore and was supplemented by PayPal donations from readers, but the trick that pushed us into the black was the annual anthology (Realms: The First Year of Clarkesworld) published at the end of the year. Soon after, the bookstore closed, but those anthologies continue today. Subscriptions, however, have long ago replaced them as our primary source of income. (Quick plug: We just published Clarkesworld Year Twelve: Volume One and Volume Two. The Year Thirteen volumes will follow before the end of 2021.) Why an anthology? From the start, our plan was to follow the readers and, at that time, print was the dominant medium for short fiction.

After our first year, we introduced non-fiction features. A few months later, we followed the readers again and launched a very basic version of our podcast. By our third year, we brought in Kate Baker to become our Podcast Director and a few more months before the podcast would start including every story. A couple of years later, we introduced our Kindle subscriptions, which after five hundred subscribers, allowed us to include a third story.

The sixth anniversary of our founding (July 2012 at Readercon) would end up fundamentally changing the direction for Clarkesworld and my outlook on life. On the first day of the convention, I suffered a “widowmaker” heart attack. Fortunately, the hotel was a block away from one of the best cardiac hospitals in the Northeast. They saved my life, but not before significant damage was done to my heart. Without modern pharmacology (and listening to my doctors), I wouldn’t have survived a year.

A brush with death changes you. What you value and want in life becomes much clearer and what doesn’t fit becomes easier to let go. It’s housecleaning on a major scale. Over the course of weeks of recovery, a couple of big things became clear to me:

The first item made it clear that I needed an exit route. The second item identified an obstacle towards achieving that goal. I recognized that it would take some time and started working on the second item right away. Nine years later, we still aren’t done. What makes it even worse is that this problem is rife across online magazines and as the owner of one of the oldest magazines, I feel somewhat responsible for my role in helping establish that pattern.

We didn’t immediately downsize or freeze future growth in the magazine. Our staff was already small and those kinds of changes would have been counterproductive. Instead, I opted for a path that would be more purposeful and proportional. For example, one significant change in the time since has been with our work in translation. Everyone here considers this to be important work, but it comes with additional costs, particularly since we’re committed to equal pay (not split) for translators. It’s an area of growth that could have withered on the vine without increases in our paid readership, support from Storycom, and grant opportunities like the one received from LTI Korea. What we’ve learned in the process has improved the overall health of the magazine.

Five years after my heart attack, my wife returned to the workforce, creating an opportunity for me to leave my day job and focus more exclusively on editing Clarkesworld and anthologies. The four years since haven’t been easy. Aside from the pandemic impacting the last two years, I’ve had multiple medical issues disrupting my schedule, and significant jumps in my insurance premiums. I’ve always known this wouldn’t be easy, but I have no regrets. I love this job and count every step forward as a victory. That we can continue moving forward after fifteen years is an amazing feeling and getting to work with so many talented people isn’t bad either.

Looking back, I’m quite grateful for everyone that has supported us and even those who didn’t (proving you wrong was a different joy). That said, I will always have a special place in my heart for those authors that were willing to work with us in our first year:

The magazine was unknown, and I recall being told by “pro” authors at the time that online venues were for “newbie” authors and low-quality work. You took that jump with us and I think we proved them wrong.

Our in-house anniversary was in July and I thanked our staff in that issue, but I’m compelled to acknowledge their work once again. I’d also like to call out the two people who have been with me the longest: Sean Wallace and Kate Baker. They are like brother and sister to me and have been there for me through the best and worst. I am truly surrounded by amazing people.

So what’s next? If I’ve learned anything, it’s that I have to pace myself. As I mentioned, we’re still not where we want to be with regards to staff pay, so that remains a high priority. I’m also picking up the pieces from all the projects pushed to the side during this year’s medical adventures and trying to determine the best path forward. That includes things like the remaining Clarkesworld anthologies, a couple of other anthologies, the Spanish language submission project, and even re-evaluating our subscription prices. I don’t have specifics for you now, but conveniently, that gives me something to talk about next month.

Thanks for reading and listening! Thanks for showing us what is possible through your ongoing support. 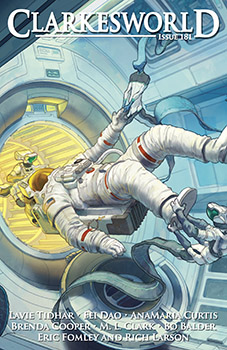