Sitting by the Fire, Thinking of Non-fiction

I expected to be attending World Fantasy Convention in San Diego today, but my family, day job and airfare conspired to keep me home. Instead of spending a nice warm day in California, I am being subjected to a rare Fall snowstorm in New Jersey. As I write this editorial, the snow is piling up, knocking down trees, and causing power outages. Tomorrow, I’ll be inspecting the damage and shoveling out. This isn’t the fun weekend I had planned, but I’ll try to make the best of it. Perhaps I’ll grab my Kindle, sit by the fire and drink some hot chocolate.

For the good part of the last two months, I’ve been dealing with a different sort of unexpected event. With Cheryl Morgan’s upcoming departure from Clarkesworld, I needed to find someone who could carry on her excellent work and move us forward from there. The number of talented people who expressed an interest in becoming our new Non-fiction Editor pleasantly surprised me. After much consideration, I offered the position to Jason Heller. I first encountered Jason’s work through an article he wrote for Cheryl back in issue forty-five: “Moonage Daydream: The Rock Album as Science Fiction.” Since then, I’ve enjoyed his work in a wide variety of publications, including regular appearances in The A.V. Club and Alternative Press.

Throughout the process, Jason and I have had several interesting conversations about the direction our non-fiction should take. He’s causing me to question some of my own preconceptions and while we haven’t settled all the details, I think he’s going to do some very interesting things. In order to support his ideas, I need to put more money in the non-fiction budget, so just as I did with fiction last month, I’m going to redirect subscription money his way after we pick up another five hundred subscribers.

In the meantime, please let us know what you’d like to see. Are there features you’d like us to include or expand on? We’ll be sharing some of our ideas in the months ahead, but this is the perfect time to get your two-cents in. Leave a comment on the website or send Jason and me an email. We’d love to hear from you.

Oh, and if you were at World Fantasy Convention, please do me a favor and tell me it rained the whole time. 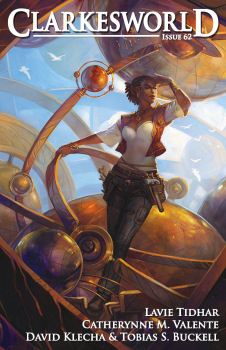