Telepathy, universal translators, and other convenient tricks allow our favorite science fiction characters to bypass the inherent problems in communicating across multiple languages. It’s a simple shortcut and recognizable trope that allows the author to keep the story moving. We often have trouble with the language barriers among our fellow humans, so it’s not hard to imagine how much could go wrong between species.

The way we address language and communication in science fiction has been bouncing around in my head a lot lately. Wouldn’t it be nice to have a magical device to solve this problem? Sure, we have things like Google Translate and they can be quite helpful, but it’s still communication on a very childlike level. Machine translation doesn’t understand the context or cultural references. That might be acceptable for bookshelf assembly instructions, but it would completely strip a story of its strengths.

Stories require someone who is intimately familiar with the language, culture, and storytelling. I’ve often said that I think a good translator has to empathize with the writer they are translating or the story could suffer. These complications—and the addition expense of translation—have left most English-speaking markets isolated from science fiction happening in other languages.

I’ve always felt like we were missing out on something.

In the last few years, I’ve had the privilege to work with two excellent writers who also happen to be translators: Ken Liu and John Chu. It’s thanks to their efforts that we’ve been able to publish several Chinese translations over the last few years. Those rewarding experiences led to our partnership with Storycom and last month’s successful Kickstarter campaign to regularly publish stories from other languages.

This January, we’ll publish the first of many Chinese translations—every other month for the first six months and every month after that—as a supplement to our regular content!

I’m absolutely overjoyed by the warm reception our plans received from readers and other parts of our community. While the focus of this project was Chinese science fiction, we never intended to stop there. Thanks to some generous support, it won’t. I am very pleased to say that we’ve been able to establish a small translation fund to help us secure stories from even more languages. We don’t have a solid timetable for those stories, but during the last month, we’ve heard from many translators and fans from around the world. From that base, we’ll build the infrastructure we need to get that project running.

Along those lines, a reader asked me why we decided to go with a regular feature over a special issue or anthology. It’s a good question, particularly in light of how fashionable the latter has become in recent years. While I don’t think there is anything wrong with special issues, I’m not a big fan of the one-and-done model of promoting a cause. They might make a big splash and generate some warm fuzzies, but months later, it’s largely forgotten.

I want translations to become something normal. They shouldn’t stand out or be special because of where they originate. Regularly publishing stories from other parts of the world is the best way to do that. If something is important, make it part of who you are.

This is important. It will be part of who we are. No gimmicks. Just stories. 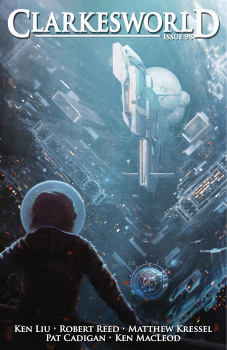