Editor's Desk: The Voice in the Shadows

Most months, I struggle to find what I want to write about in these editorials. It doesn’t seem to matter whether or not I’ve had time to think or if I feel rushed by a hectic schedule. The anxiety when writing these or an introduction brings everything to a crashing halt. I’ve been trying to work my way through this difficulty and only recently started drawing the parallels to public speaking. I don’t know why it didn’t strike me sooner. Both involve sharing words with a crowd of people. It is that feeling of claustrophobia that wakes up the little bullied kid that lives in the shadows of my mind. “Don’t draw attention.” “It’s safer in the shadows.” “They will hurt you.”

I started my career in academia in the late 80s. As someone in technology, I anticipated being behind-the-scenes most of the time, but within a couple of years, I was the director of a growing department at a time of great change in both technology and education. The price was having to put myself out there. Small meetings were never a problem, but soon I was expected to give talks about our program at admissions events, large lecture halls filled with prospective students and their parents. To get the grants I needed to fulfill our goals, I’d have to make presentations and consult at other universities. Although I was confident in my command of the information I had to share, it was never comfortable or easy for me.

I don’t remember when I was first invited to be a panelist at a science fiction convention, but it was within the last ten years. I know I felt completely unqualified to be there, but the crowds were smaller and I wouldn’t be up there alone. Whatever I said on those panels was sufficient enough to keep receiving program participant invites, but I was convinced that they simply hadn’t caught onto how unqualified I was. Being wrong was never something I was afraid of—I was afraid of the crowd and what they might do.

It would be a few more years and a couple of awards before I’d begin to accept that maybe I did belong. I was able to add to the conversation and at worst, I’d learn something in the process. As I stopped listening to the little voice in the shadows, the audience started feeling less like a potential angry mob—something they had never given me reason to believe. Of course, there was a heart attack in there somewhere and that changed a lot of things for me as well.

In the last few years, I’ve felt a lot more relaxed. It still makes me uncomfortable, but between coping mechanisms and a little faith in my fellow fan, I’m able to look the part. In October, I was a Guest of Honor with Ken Liu at Capclave in Gaithersburg, MD. It’s something I don’t think I could have done even three years ago. Someone there noted that they were in a workshop I had done there a few years earlier and how much more relaxed I appeared to be. That served as a sort of a-ha! moment for me. Nearly thirty years later, I can finally pass as a functioning but exhausted human being while doing three days of panels.

My first Clarkesworld editorial didn’t show up until issue 21 (June 2008)—the same issue that launched our podcast. They didn’t become a regular thing until much later. Even with the increased frequency and the occasional anthology introduction, I figure that I have a good ten to fifteen years of practice to go. I apologize in advance for everything that comes between now and then, but will try to have something really awesome to make up for it on the tail end.

Have a great November and thank you for reading Clarkesworld! 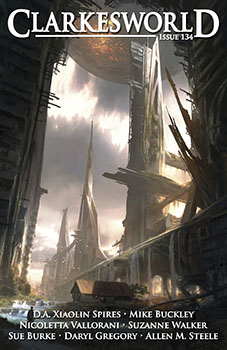