Conventional wisdom often has an element of truth to it, but sometimes it’s used as an excuse to keep things the way they are or to discourage people from trying something hard. The problem is that it reframes beliefs and expectations rather than addressing why it’s hard to make money in short fiction.

Fifteen years into this career, I’m still asking why. It’s a topic on which I’ve opined many times. There’s a long record of this in convention panels, blog posts, editorials, and introductions to my Best Science Fiction of the Year anthologies. Each time I get close, I discover another spiral that takes us deeper into another level of problems. To make matters worse, many of the issues are directly tied to perks, which causes some to be reluctant to even discuss them.

“There are too many markets relative to the number of paying readers to be sustainable” is also “there’s a wider and more diverse array of stories being told now than ever.”

“Free online fiction has created a perception that short fiction doesn’t need to be paid for or isn’t worth paying more than a little for” is also “the reach and availability of free online fiction has reinvigorated the field by bringing in a large number of new readers from all over the world.”

The situations that created these “problems” are also responsible for creating the “benefits.” Far too often, one will be acknowledged without the other. You can’t solve the problem without understanding the benefit and you won’t be able to keep the benefit without addressing the problem. It spirals further when the linkages between the two are ignored.

There’s no denying that the landscape of short fiction has been radically altered by the introduction of free online fiction. In that case, is the original seed of truth in the conventional wisdom simply a relic from a day gone by?

Language is important. Is repeating the wisdom what shapes the current reality? Similarly, are little things, like calling SFWA’s qualifying rate a “professional” rate, just reinforcements? (Note: SFWA’s bylaws never call it professional.) It’s the MINIMUM qualifying rate. The industry should be aiming higher than minimum. Besides, do we really think that eight cents/word is a professional pay rate? Do you know how long it takes most writers to write a story?

Now, before some people jump down my throat, I’m fully aware that a number of markets can’t afford to pay the qualifying rate or more. I’m not suggesting publishers spend beyond their means. If you want them to stick around, they have to work within their means. Besides, if an author wants to sell their story for less than the qualifying rate, that’s their decision. If anything, perhaps pay rate as the primary indicator of what makes a qualifying (or even professional) market is yet another relic of a different era.

We’ve always paid over the SFWA rate because we believed that authors should be paid fairly for their work. Fairly, to us, was not the minimum. Where we (and many other online magazines) failed was that we didn’t think the same way about ourselves or our staff. We’d get what was left, which was never much. Over the last decade, I’ve spent considerable effort to address this at Clarkesworld. In the end, it’s all driven by a spreadsheet that ties average monthly revenue to pay increases across the magazine.

Last month, we increased our pay rate for authors/translators from ten to twelve cents/word. Since they were paid better than everyone else from the start, each cycle on the spreadsheet ends with a boost to author pay. This increase signals the completion of one major round of pay adjustments. Do I consider twelve cents/word to be professional? Hell no. It’s just a step and there’s many cycles left to go. It’s a long spreadsheet.

How was this possible? I’m looking directly at our subscribers/supporters when I say this. You. Each subscription or new supporter took us a tiny step closer to the next goal. It’s oddly appropriate that we would cross this milestone at this time of year. Thanksgiving will be celebrated here this month and you will be front and center in our hearts and minds. Thank you for your continued support.

If you look at the numbers, there are more than enough people reading short fiction that making a living at it is theoretically possible. Still hard, but if we’re willing to challenge the conventional wisdom and frame it around the realities of this age, then we can work towards it. We’re living in a time where there’s a sincere push (and some improvements) to give fast food and retail workers a living wage. Is it really such a leap to hope that short fiction could find a path too? Online fiction changed the landscape of short fiction, but just for a moment, imagine the revolution a living wage would bring to the table . . . 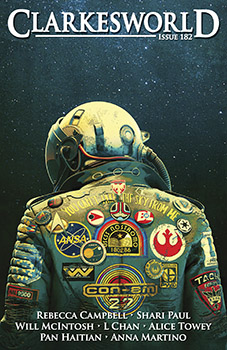