The future of science fiction is international and, much like other envisioned futures, it arrives unevenly. Some people reap the benefits of things like clean water, cars, computers, or the Internet years, decades, or generations after the early adopters. When I last spoke of this, I realized a flaw in the phrasing. Science fiction is already international. It’s everywhere. What we lack is the infrastructure to make those works available to all of us.

Publishing has almost always been a regional industry. When a work crosses from one bubble to another, it’s typically through a separate contract involving subsidiary rights sales. This places the agents representing those rights in a critical infrastructure position, but it also counts on the publishers to be willing to take on such projects. Sitting here in the US, this is the problem I can readily point to when it comes to our region. Historically, publishers just haven’t been motivated to do so. It’s easy to point a finger at budgets, particularly when translation is involved, but unfortunately, there are also culturally-engrained factors that complicate matters as well. The status quo works for them and there isn’t much incentive for change.

In short fiction, it’s a bit different, however. Authors aren’t typically working with agents, so the author is left on their own trying to navigate the various local publishing intricacies. The Internet has made submission and communication a lot easier, but if they aren’t writing in English, it often falls to the author to find a translator, front the costs, and hope they can sell the story through general submissions. It’s not a practical option for the overwhelming majority of short fiction writers, even those with significant name recognition in their own language. While the short fiction publishers have become accepting of global SF in the last decade, the field’s long history of indicating otherwise continues to deter many from even trying to be published here.

I’m not in a position to influence the larger half of the field, but I’m able to demonstrate what can be done in short fiction. In November 2020, I announced my intention to try something a bit outside our comfort zone: a submission window for stories written in Spanish. (I don’t speak Spanish.) I was originally hoping to launch the project in 2021, but a series of hospital stays pushed most of that work back into 2022. I am now pleased to announce that we’ve completed all our preliminary behind-the-scenes work. From January 15th, 2023 through February 15th, 2023, we will be open to science fiction submissions written in Spanish.

The purpose of this project is to:

It’s our hope that what we learn from this experience will allow us to:

I selected Spanish for our first window because it’s widely-spoken, represents a large community of writers around the world, and provides some logistical advantages with regards to assembling the team of people we need to make this work. The project hinges on that last item and so far, I couldn’t be happier with the crew we’ve pulled together. Their feedback has been valuable in refining how this process will work.

It's important to me that the stories submitted via this project will be held to the same evaluation criteria we use for English-language submissions. There are no quotas or limits set for the number of stories accepted via this project. Accepted stories will be contracted, translated, placed into general inventory, and scheduled just like any other story. There will not be an issue dedicated to Spanish translations. We have no interest in causing translations to be seen or treated as a novelty, “special,” or something otherwise different than stories written in any other language.

Further information and guidelines for this project can be found in English and Spanish at: clarkesworldmagazine.com/submissions-spanish/.

If you know anyone currently writing science fiction in Spanish, please let them know. If you’re an editor or publisher who would like to learn more about how this works, feel free to get in touch. I’m happy to share anything we learn.

I’m looking forward to the start of this phase of the project and new stories we’ll discover along the way. With any luck, we’ll help bring that future I’ve been hoping for a little bit closer to reality. 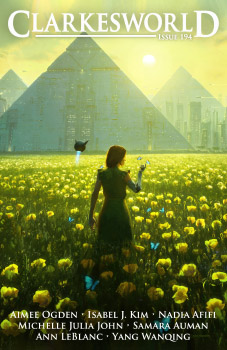