In October, I attended Capclave, my first in-person convention since November 2019. It was small, low-key, and perfect for an overly introverted person to dip back into social waters after a long absence. Afterwards, I was pleasantly surprised to discover that I needed nothing more than my normal post-convention recovery period.

In November, I attended Philcon, my second in-person convention. It was also small and fairly low-key, but for some reason, this one hit me like a ton of bricks. In the week since, I haven’t wanted to do anything except curl up somewhere warm and do nothing more complicated than watch TV or play video games. Not the best state of mind to be in ahead of publishing a new issue, but I rearranged my schedule and plowed through.

This month, I’m packing up my van and driving four hours to Washington DC for Discon III, the 2021 Worldcon. It will probably be smaller than most of the recent US-based Worldcons, but it will still be much larger than Capclave and Philcon, and draw people in from a much wider area. In the past, I’ve found Worldcons to be very energizing. I’ll be fine during the convention, but I anticipate needing a break—during the holidays no less—after. That said, I’ve always found Worldcon to be worth that price and have no qualms about attending, other than those that come with our current state of the world.

Being an introvert appears to be the default setting in our community. That can make a Worldcon a particularly overwhelming experience and even more, if it’s your first time or on your own. The unplanned conversations are often the best part of these conventions and introverts are wired to miss out on a lot of this. We can help one another by being more aware of the dynamics at play. For example, if you are in a group discussion, it’s far too easy to unintentionally close the circle and keep people out. See someone hovering on the edge? Move over a bit and open up the circle for them.

If you’re not ready to join an existing conversation, a good way to meet people is to sign up for one of the many kaffeeklatsch sessions held during the con. Think of them as a small group discussion with one of the program participants. These are times that they have volunteered to sit, chat, and answer questions with what could be a random group of strangers. It’s a great way to meet people in the field that you might be hesitant to just walk up to. Just be sure to sign up early as some of these sessions can fill fast.

While I can find a convention overwhelming, the primary reason I’m there is to meet people. It forces me a bit outside my comfort zone, but it’s only a few days and it’s great to be able to put faces to the numbers submitting their stories or reading/listening to the magazine. Having been on the other side, there’s a few things I try to make it a bit easier for people to say hi and have a discussion:

Don’t let all that effort go to waste. Stop by and say hi. If you won’t be at Discon, which is true of most of you, then I hope to see you some other time. May the rest of 2021 be kind to you and, should you celebrate, happy holidays! 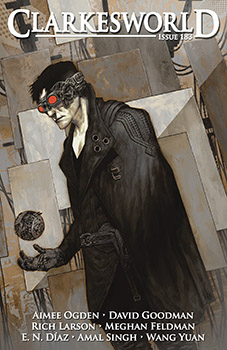