In my never-ending quest to figure out what to write about for this column, I decided to take a trip down memory lane and read through all of my past December editorials. Oddly enough, it made me feel better. I’m apparently always exhausted by this point in the year. Alongside the holidays, this time, it was brought on by three editing deadlines, two in-person conventions, and a lot of research and writing.

While it’s customary for many to look backward at this time of the year, I usually save that for January and February as we kick off our annual reader’s poll and year-in-review analyses. In the sixteen years I’ve been editing this magazine, I’ve adopted all sorts of procedures and mechanisms designed to manage and streamline my workload, particularly after my heart attack a decade ago. I now look at those two months as my editorial vacation, and I’m realizing just how much I count on the freedom it grants me to recharge and refocus.

For the last two years, we’ve lived through extraordinary circumstances, a global pandemic disrupting so many aspects of our lives. It’s only in the last few months that I haven’t needed to adopt a plan B, C, or even D as part of getting one of these issues out on schedule. What bothers me, though, is that I can’t tell if that’s because we’ve become better at anticipating the problems or if things are actually improving. It’s probably a bit of both, but regardless, it says I need a vacation. A lot of us do.

Looking ahead to next year, I have a lot of things I’m looking forward to: the Spanish-language submissions window; two volumes in my Best Science Fiction of the Year series being published (early and late 2023); some travel; and so much more. However, to be in the best possible position to enjoy these things and do them well, I’m going to give myself a break. Maybe you should, too!

So, in the spirit of the holidays and the theme of this editorial, I’m going to cut things short, and let you enjoy the issue! 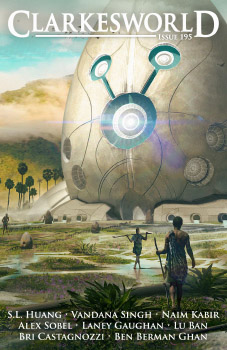