The Issue of Gender in Genre Fiction: A Detailed Analysis

In 2013, Lightspeed Magazine announced a special, “Women Destroy Science Fiction” issue, written and edited solely by women. The issue was intended to challenge the misapprehension that women don’t write “real” science fiction. On reading this, my first thought was “cool.” My second thought was, “I wonder how women authors are currently represented in science fiction short markets.”

Gender representation in genre fiction is an issue that’s been getting more and more attention, but nobody had yet assembled a comprehensive review of the data. Now that I have collected this data, I can see why. So many emails . . . So much Excel.

I quickly realized that the raw numbers of women-authored fiction published was only part of the story. In the first place, finished magazines are the end result of a process. This process starts with submissions, and so any analysis needs to also look there. Secondly, there are various other factors that could be investigated, such as whether gender or age of editors has an impact on what gets published.

When conducting a study, it’s important to choose your sample carefully. SFWA qualifying markets get the most attention in terms of award nominations, gaining of “professional” status, and by-and-large have the largest readerships. So, I chose the SFWA qualifying markets that publish science fiction and accept unsolicited submissions as a sample group.

Originally, I emailed the editors of these markets with four questions. By the end of my investigations, I had asked them a total of fourteen (with multiple sub-questions). The amount of work done by these editors, slush-readers and other staff was absolutely immense, and none of this would have been possible without their willingness to take time away from their actual work to help me with this study.

This article should not be read as some kind of hit piece, pointing out “bad” markets and “good” markets. What I’m trying to do is make available some facts, as far as I can discern them. What is the situation regarding gender representation in science fiction? Whether or not this is something we should care about, and what strategies should be employed to deal with it, if any, are a separate issue. The one thing I’m certain of is that the more data and analysis we have, the easier it is to discuss these issues in a productive way.

In this specific article, I’m looking at Publications, by which I mean published prose fiction stories, including those accepted from slush, reprints of previously published stories, and stories solicited by editors. Basically, what was seen by readers in an issue of the magazine or on the market’s website. Most markets gave their data for the year 2013, however, in some cases (such as the F&SF special issue) the data is from 2014.

In future installments, I’m going to look at Acceptances (stories accepted from slush for publication), Submissions, and Interactions between these categories.

No market in this study asks for authors to identify their gender when submitting. As such, this is not actually a study of publication and submission gender. Rather, it is a study of the apparent gender of authors based on name and publicly available information.

The gender breakdown for all published stories and for science fiction stories only can be seen in the table below. Three facts regarding SFWA-qualifying markets are clear from this data:

Looking at these markets individually (see the graphs below), we can see obvious differences—for example Strange Horizons published more women than men, Escape Pod published more men than women. While it is clear from the aggregate figures above that overall more stories by men are published than stories by women, seven markets publish greater than 50% stories by women, and six markets publish greater than 50% science fiction stories by women. After running some statistical analysis, there is no evidence that markets overall are biased towards publishing men, whether we’re looking at all genres or science fiction stories specifically. 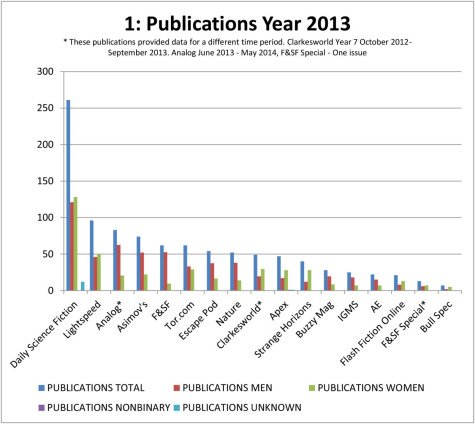 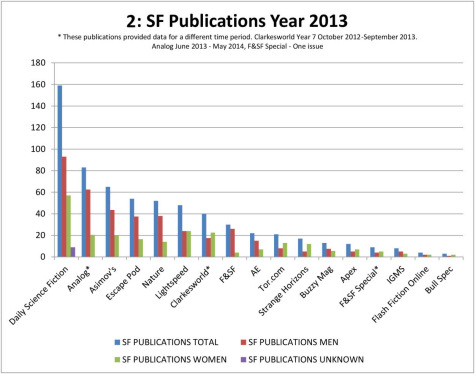 So, we cannot say that SFWA markets in general are skewed towards publishing stories by men. This does not mean there is no skew at all, rather it means that we cannot make broad generalizations about the group as a whole in this matter.

Indeed, we can see there are what seem to be large differences between individual markets, from F&SF’s ~80% of stories by men down to Bull Spec’s ~25% (see graph 3). Are these differences “significant?” Significant, in statistics, means that something is not just due to chance alone.

For example, if all of our markets published between 55% and 57% stories by men, we’d feel that this level of difference between the markets wasn’t that important—we would feel comfortable making generalizations. If half of the SFWA qualifying markets published 95% stories by men, and half published only 7% stories by men, we’d be pretty sure that was an important difference! The difficulty is when the numbers aren’t quite so clear-cut, such as those we have here. Thankfully, we have statistical tests to help us figure this out. It turns out that the differences we see here are significant, both for all stories and science fiction stories specifically. 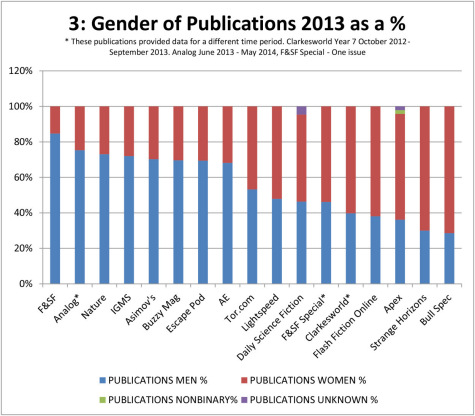 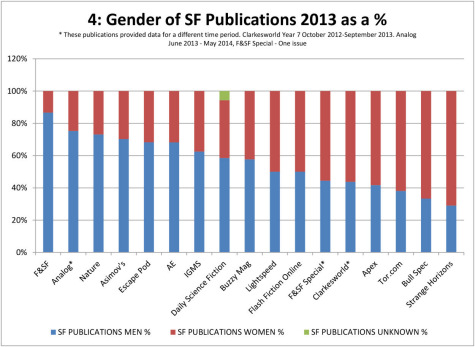 Enough markets skew towards authors who are women that we can’t say anything about a possible gender bias of all seventeen markets as a group. So, where do the large differences we saw in Publications Overall come from? Well, for all stories, the markets that skew towards authors who are men averaged 71% stories by men, for a total of 328 publications, while those that skewed towards stories by women averaged 60% stories by women, for a total of 288.5 publications. 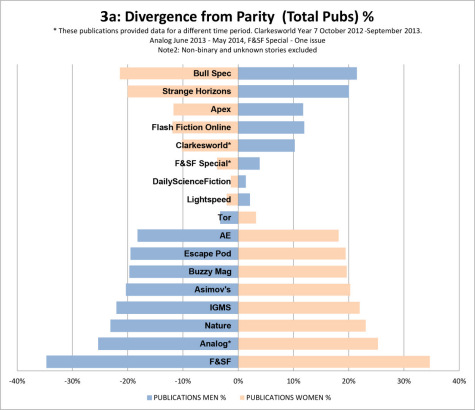 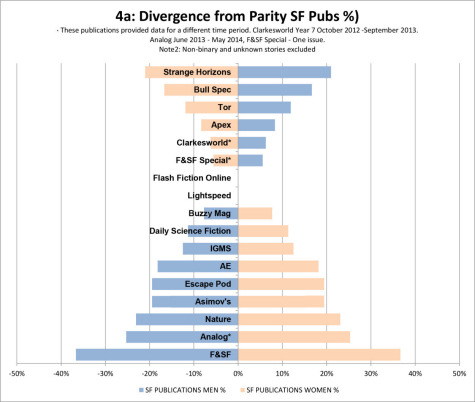 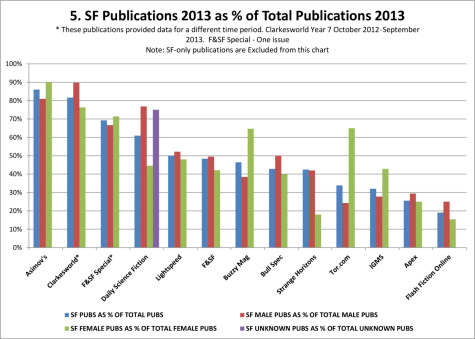 During my research, two theories regarding gender representation of authors were brought to my attention.

I was unable to gather this data for all the editors and editorial teams, but with the data I did have, I tested those theories, with some interesting results.

I also tested for relationships with the age of the senior editorial team. A very weak relationship was found, and only bears mentioning to maintain completeness in presentation.

What Does This All Mean?

There are a couple of takeaway points from the analysis so far.

If we believe that science fiction story authorship should reflect the gender breakdown of the world population, the analysis shows that currently, published science fiction short stories in SFWA qualifying markets are skewed towards authors who are men. However, this is not something that all markets contribute to equally. Multiple markets are close to parity, or even skew towards stories by women.

Seven of the thirteen mixed-genre markets have a greater representation of authors who are men in their science fiction section than in their overall catalog. However, in general, mixed-genre markets that publish a high proportion of stories by women overall will also publish a high proportion of science fiction stories by women, and vice-versa.

I mentioned at the beginning of this piece that publications are the end result of a process, and this analysis is a process as well. Looking at publications alone is insufficient. However, it does give us some important information—it shows us the situation as it is, and that’s our first step in figuring out how it came to be.

Next time on Adventures in Statistics: Do Acceptances show the same patterns? Are editors displaying preferences in the stories they solicit and the reprints they choose to publish? Do different markets show significant differences in the gender ratios of submitted stories? Will our heroine have an Excel-induced meltdown? Stay tuned . . . 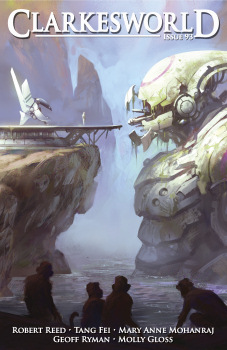