batch 39 and the deadman's switch

You have Ted Kaczynski down the hall—the Earth Firster who quit tree-spiking to pipe-bomb a forestry convention—the abortion nut who gunned down three girls in Missouri—a half-dozen Arabs, half of whom again you have on phony evidence. I suppose I’m in good company. Or I would be if we could talk to each other.

You want to talk about the anima device. Devices. Of course. Everyone wants to know about Kazinsky’s time at Harvard, but MIT doesn’t rate. Yes, I understand the difference. Mail bombs don’t usually fit on a postcard.

This all started with my boyfriend. You figured he was behind it all, which just makes you sexist. He turned out to be tougher than expected, but then again, librarians always do. I understand that the American Library Association is filing a lawsuit on his behalf. It may even finish up before the courts collapse.

Mack worked for a library that handled rare manuscripts. Not exciting manuscripts, rare manuscripts. The Gutenberg Bible is not rare enough for them. Five copies in circulation is at least two too many. Like the Federal Government: lender of last resort. We think he got it from a Russian treatise from 1930 they uncovered after the Mafia blew a hole in the University of St. Petersburg because they wanted land for a new hotel. Where the Russian got it I don’t know. But we know the connection: Plotinus. The treatise was on the iconography of a Plotinus manuscript the Reds had looted from the palace. Before they shot the Romanovs.

Did you know the anima in Plotinus has been an open problem for historians of philosophy? Nobody could figure out what it meant. “Soul,” if you look in the lexicons, but that kind of Christian term doesn’t take you very far. Nor it is pnuema, the in-breathing of the gnostics, or any of a dozen other ways people talked about the sorts of things we run an MRI for today. The best clue we have is a passage that talks about illumination.

Which is, in the end, how I found it in batch thirty-nine. The thirty-nine steps. Two more than the most random number between one and a hundred. Terms two and three in a geometric series based on the Trinity. Not the bomb site. That came a little later.

Unlike the two Trinities, batch thirty-nine did not come out right. All the previous ones we had, through a combination of cross-breeding and radiation-bombardment, gradually taught to clip and reassemble proteins. We were solving the travelling salesman problem in a massively parallel form. As a test case. Biological computing. Batch thirty-nine, despite being the most advanced system yet, turned the vats to gel.

I was the graduate student and I was both curious and bored, so I reduced the gel, tipped it out on the bench like a birthday cake, clipped a corner, dropped it in universal solvent—water, to you—supersaturated the solution, and triggered a crystal. Which, unsurprisingly, did not look like the standard Frank Gehry bolt-on. I autoclaved the rest, and got time on the micrograph over in Systems.

Systems was a joint university-Air Force project. It was headed—de facto, not de jure—by Rachel, who was always in the pressed uniform of her branch. Rachel was a grump, but she was efficient in the comforting way civilians imagine all military types to be, and she booted up the micrograph, plated the crystal surface, parked me at the screen, and left. That’s when I saw the anima.

They were a few microns on a side. On the surface a few brute-force levers, but clearly doing something more than Archimedes: the whole surface was electrically active, strong enough to make the images shiver in the electron beam. Wherever they sat in the crystal, the surrounding proteins twisted into new patterns. I tweezed one up with a ion probe, put it down. The ion probe is pretty brute force; a bunch of them fell onto the bench.

Then I put the crystal in the fridge, and went out for a late dinner. I was starved. Or, at least, I thought I was. It was then I caught a glimpse of what is, at this point, planet-wide. Little things, but strange. Crossing Mass Ave, the traffic lights went red and green together. The ATM in the student center dumped three grand into the tray, irritating enough because I had checks I needed to clear.

I headed back to Systems and pulled the batch again. I looked at the levers on the surface, and used the ion probe to nudge the largest. The contraption fit together like a Victorian toy and in an instant the cube had crumbled away. I looked on the plate for the machines I had dislodged, and destroyed a few more before I felt guilty.

Outside the door, I heard weeping, and I stepped into the corridor; it was Rachel. Her uniform was in shreds all along the hallway; she herself was naked. I held her head while she choked on mucus and told me what Systems was for. It’s above your paygrade, I’m sure, but it can’t hurt to tell you that the august institution that funded the travelling-salesmen problem was keen for a dual-use.

It turns out, out in Iraq, that the U.S. military used to leave booby-trapped bomb components in volatile areas. They guesstimated that about ninety percent of the casualties were bona-fide insurgents trying to scrounge up enough wire, cord and shell casings for the next IED. It was the biggest success of the occupation, and Systems was going for the next stage. The biological analogy.

It didn’t make much scientific sense—this is the same military that tried to leverage paranormal Uri Geller types to spy on the Kremlin, after all—but Rachel had an inkling of how the various products of Systems were tested: back out in Afghanistan and Iraq, on people we disappeared off the streets. Rachel’s arms and face were bloodied by self-inflicted scratchings, but this was apparently nothing compared to what went down in a retrofitted Abu Gharib.

The court martial, six weeks later, was not exactly advertised on the Internet. But I knew why Rachel had disappeared from the lab, and I knew where to find her. I gave her a shard of the crystal, and she duly dropped it on the prosecution’s table. In his coffee, actually; Rachel was a very angry woman. The next morning, I turned on NPR for the commute in time to hear Lakshmi Singh interviewing both sides of the court martial after a joint statement. What then became known as the Systems Trial—formally, Afshordi et alia v. Department of Defense—ran for three months. It took time, because the alia were twelve rows deep in the visitor’s gallery.

I’m a reasonably good scientist—for a girl, as my freshman advisor told me—so it took a few more test runs before I understood the anima devices. A police brutality case in Chicago and two resignations in Congress made the news. It was about this time that I took Mack in to the lab and we eventually traced it to Zukankov’s Plotinus book. That gave our cubes the name.

We soon figured out the lever combinations that produced more—I thought about the backstory quite a bit. The anima devices were bizarrely complicated, practically sentient. We soon discovered that we didn’t need an ion probe; various chemical combinations—like the supersaturations I started with—would trigger them. Mack pointed out that simply distilling a healthy alchemist’s urine would be sufficient to get them running at full steam.

The anima, you see, is a fail-safe. Systems would never have found them. You need to be a little more curious than Industry, a little cleverer than a dilletante, and have a little more spare time than someone doing work-for-hire. And, of course, you have to like old books. As Mack says, you need to be an intellectual: a Plotinus, a John Dee. Or at least John Dee’s graduate student.

I don’t know who made them. Not any of us. And obviously not the people who came before us. But they work, and even pre-Enlightenment science would be enough to figure out what they did.

Before you picked up Mack outside his office and hit him with something even harder than waterboarding, he pointed out that fail-safe was not quite the right word. Neither of us wanted to release them on a global scale. We figured we’d keep them safe, use them sparingly. Neither of us had finished the Brothers Karamasov, but we had read the Grand Inquisitor section, and both of us were keen on Free Will. We voted for Howard Dean, not the Spartacus League.

The anima devices are not weapons. Only a particular kind of person can find them, and it’s the kind that doesn’t go in for world-scale domination. But now Mack is gone, and I’m in a supermax in flyover country.

It took a long time for the Roman empire to collapse under the weight of a confused and strangely altruistic religious ideology. Plotinus was long gone. Things happen faster these days, but there’s no way you’re going to let me out of here to turn it off, and it’s rather too late. Our apartment is a crime scene and seven liters of the stuff has been divided up and sent to every branch of the government, known and hidden, for analysis. Rachel tells me that it will hit the Israelis, the Russians, and the Chinese, in that order, within the next few months.

The anima device; we know what it is.

A deadman’s switch for nerds.

Simon DeDeo is a scientist, writer and currently a postdoctoral fellow at the University of Chicago. His essays and criticism on poetics, epistemology and anarchism have appeared in The Continential Review, absent, and on his blog rhubarb is susan, and are forthcoming in Mantis and The Chicago Review. batch 39 was completed during a stay at the Santa Fe Institute. 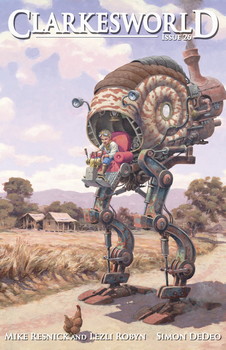