Unpredictable Changes and Surprises: A Conversation with Djuna

by Gord Sellar and Jihyun Park

Djuna is the pseudonym for an enigmatic and prolific giant of Korean SF whose offline identity has remained completely unknown to the world during their decades-long career.

Djuna has played an important role in the development of modern science fiction in South Korea, a living link between its earlier period as an online amateur scene and its more recent flourishing in Korea’s publishing world, frequently contributing to themed collections of new short SF. Their many publications also include novels and celebrated short story collections such as Butterfly War (Nabi jeongjaeng, 1997), Duty-Free Zone (Myeonse guyeok, 2000), Transpacific Express (Taepyeongyang hoengdan teukkeup, 2002), Proxy War (Daerijeon, 2006), The Teeth of the Dragon (Yongeui E, 2007), The Bloody Battle of Broccoli Plain (Brokolli pyeongwon ui hyeoltu, 2011), and Not Yet Gods (Ajigeun sin i aniya, 2013). An English translation of Djuna’s novelette “The Second Nanny” was published in Clarkesworld in 2019.

Djuna is also well-known in Korea as a film critic and has published several books on the subject, as well as a body of nonfiction work, including the collection titled Possible Spaces of Dreams: Djuna Essays (2015).

A collection of their stories in English translation titled Everything Good Dies Here: Tales from the Linker Universe and Beyond will be available from Kaya Books this July. 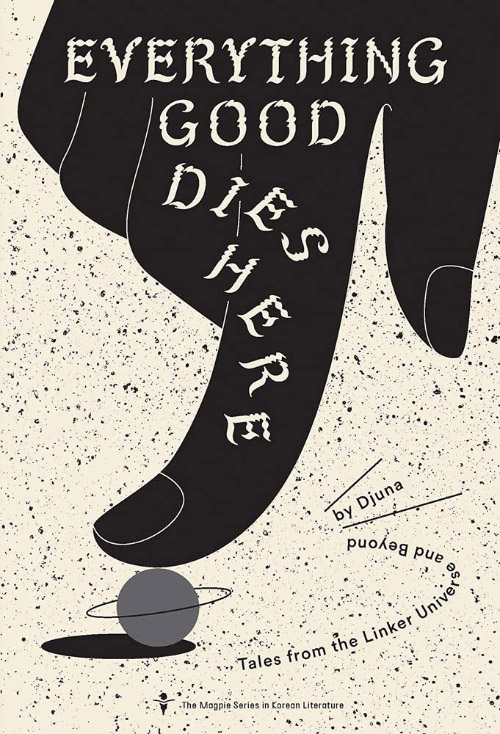 Let’s start with your pen name, “Djuna.” A few people have talked about how it’s sort of a modern “ho” pen name (like traditional scholars in Korea and other Northeast Asian countries have used); that you have a deep reverence for Djuna Barnes and her work; and I’ve also read that it was just a username you ended up choosing on a whim when signing up for a web forum many years ago. What’s the real story?

It has no special meaning. DJUNA was just my Hi-Tel ID, which was an early Korean Internet service. Originally, I wanted to use some other name for my ID, but we were limited to eight characters, so I had to use this instead. I had no intention to use it as a pseudonym or traditional “ho” pen name. If I had, I would’ve put a little more effort into creating it. Still, regardless of my opinion, editors started using it as my pen name. It was all those other people who created all this “anonymous, writerly persona” nonsense. I just use it casually—but by accepting this, I don’t need to join in on the whole “Korean style” social life.

Aside from your work in SF, you’re also well-known for writing about film. Does cinema provide you with a lot of inspiration for your fiction, or is it more of a separate interest?

Well, I’ve written an action SF story set in the future where Ginger Rogers and Fred Astaire appear. I also named a group of robots that conquered the galaxy after actors’ names and wrote two stories where an AI is named Lillian Gish. One of those was homage of to The Night of the Hunter (1955). So I definitely am influenced by movies because they are the one of the biggest parts my life.

However, that doesn’t mean that I write in a “cinematic” style like how some people seem to think I do. Folks seem to think writing action scenes in a terse style makes them “cinematic,” but it really doesn’t.

It’s been twenty-five years since your first book, Butterfly War, was released. What do you think has been the biggest change in your writing since then?

My writing style has changed somewhat. I haven’t used third-person singular pronouns for the last few years. That’s possible when you write in Korean. I made this choice for reasons related to gender politics with gendered pronouns like “she” or “he,” though I’m not sure there’s really enough space for me to get into it now.

As people get older, they often become more tender and gentle. However, I don’t think that’s ever going to be something that happens with me. I feel like I’m not really aging in a typically “Korean” way, because I have no real interest in the kinds of things others my age really care about. This kind of tension must show through in my recent writings as well.

You were among the more prominent figures of Korean SF when I first started paying attention almost two decades ago. I’m curious what you’d say is the biggest change you’ve seen within the field in Korea during that time, and what is one big change you’d like to see happen in the near future?

After all those years, my chosen genre has become mainstream in Korea. Just a decade ago, we all used to joke about how only a few hundred people in Korea were reading SF. Now, though, a day doesn’t go by without SF books included among Korean bestsellers. The change is even broader if you include films, comics, and TV series. So I need to try keep up with these changes, myself, but I’m not sure how to do it?

As for the future of the genre, I don’t want to try predict it. I just want to accept the unpredictable changes and enjoy the surprises.

Back when you started writing, SF books—by local and foreign authors alike—were somewhat harder to find than they are now in Korea generally. I’m curious what your path into SF was, and what work inspired you to try writing SF when you were starting out.

I think my entire generation probably had the same experience as me: I started with abridged editions of SF stories for kids published in the Idea Hall series. When I started writing, books by Fredric Brown and Shinichi Hoshi were my textbooks. Their short stories easily created the illusion that writing SF is easy. It didn’t take long for me to realize that it’s actually not so easy, but by the time I realized that, I had already started writing SF. Joanna Russ, R. A. Lafferty, and James Tiptree Jr. are the writers I looked up to most when I really started writing short stories in full swing. They’re all short story writers. It’s because of them that my work is centered on short stories.

I’m also curious which authors you would include among your current favorites—who are the luminaries are in your personal canon—and why?

Recently it’s mostly works by Korean writers, but I’m not sure I can really give you any kind of objective opinion here. I rarely bother with building a canon of favorite writers any longer. There are so many interesting writers now, so I don’t feel necessary to focus on small number of writers. I enjoyed reading Naomi Kritzer’s short stories just the other day, and it felt unique to read “So Much Cooking,” which was set during a pandemic like the one we’re experiencing now.

Is there anything you can tell us about any projects you’re working on now?

I am currently working on a collection of short mystery stories that are neither SF nor fantasy. I’ve wanted to send them out since several years ago. After that, I’d like to assemble a fix-up novel out of some of my short stories. They are the stories followed from my short story “The King’s Spirit” (“Wangeui Neokt”). It’s a story about government bureaucrats in a parallel universe where supernatural phenomena are understood as normal within a scientific framework.

Gord Sellar was born in Malawi, raised in Canada, and has lived in South Korea since 2002, where he has taught at universities, played saxophone in an indie-rock band, and worked as a writer, editor, and co-translator. He attended Clarion West in 2006, was nominated for the John W. Campbell Award for Best New Writer in 2009, and his fiction has appeared in Asimov's SF, Analog, Interzone, Clarkesworld, and several best of the year anthologies.

Jihyun Park is a translator and filmmaker whose debut outing, the award-winning "The Music of Jo Hyeja" (2012) was the first Korean-language film adaptation of an H.P. Lovecraft story. You can learn more about it, and her other film work, at brutalrice.com. 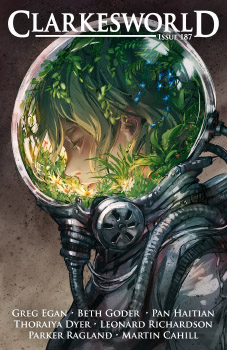