The woman who means to kill Wang Zhe is, like the rest of the universe, apparently frozen, though actually in glacial motion.

He has studied the scene for subjective years: the sculpture of her flowing cloak, the mask of her smart grease paint, the beginning of channel through that paint at the corner of her right eye. He’s gone mad theorizing on that tear. He’s gone mad counting the rain drops that hang suspended in the autumn air of this narrow Kashgar street; and mad again gauging the progress of her pistol as she levels it.

He’s gone mad wondering which will kill him first: a bullet, or the heat of his fatally overclocked brain.

There was a time, long ago, when he made a great effort of will to move his right hand on a collision course with her weapon. But of course, his body isn’t overclocked like his modified brain. He devoted volition to his hand in weird, Zen-like shifts for an apparent year before giving up. He wonders what she’ll see. Maybe a twitch before she fires, or before infected processors cook smoking holes through his skull.

He’s aware of his rising fever, but doesn’t feel it like he would in baseline time. It’s a barely perceptible global warming. The air on his skin and the weight of his utility kilt are an unchanging tactile cocoon, sound a basal drone. Sometimes the hellish monotony of his final moment is too much to bear. He retreats into memory.

He remembers his modification, deep in the bowels of a qingbaochu somewhere between Lhasa and Chongqing. All the agents endured it. After two months of psychedelic torment, they emerged with strange new powers. The one that would be their downfall was considered the greatest: acceleration or deceleration of thought, at will. The former would give them initiative in split-second decision making; the latter would speed them through isolation or torture.

The PRC’s sorcerers were optimistic. If they imagined a virus that could set thought-rate fluctuating randomly and beyond design specs, they didn’t picture it in the hands of Uyghurstan.

It hit him first in the Urumqi Han ghetto. One moment he was shuffling along with a river of his emaciated countrymen, and the next they flowed past him in a blur. He barely had time to realize he was underclocked before suspicious Uyghur troops buzzed in and whisked him away. Still he decelerated. Months of internment flashed by in minutes.

He doesn’t know if she visited during that time. She would have been another flash in the racing patterns of daily activity. Humans came in streams. They were blood, pulsing through routines with each day’s heartbeat. With each beat came the high-pitched whine of daytime clamor, the momentary break of night—with each beat, a staccato of force feedings and med-probes.

She probably had access to his little white cell. She must’ve known he wouldn’t recognize her. Was she tempted to come? Was their Tashkurgan tryst just business for her? He entered Uyghurstan via Pakistan, following the rubble of the Karakoram Highway through the Khunjerab Pass. Love was the last thing he expected to find on the Roof of the World. It managed to over- and underclock him at once. Three incredible days shot by, but there were moments that seem in retrospect to weigh centuries. A kind of gravity pulls him back to the ancient battlements of Tashkurgan Fortress, her hand in his, looking down upon the vast green plain sprinkled with white yurts.

“Uyghurstan will never again be Xinjiang province,” she murmured.

He was determined to do his part in returning Xinjiang to the fold—and he loved her anyway. Her passion was all the more endearing for its futility. Did she say it to test his reaction? Could she read micro-expressions like he could when overclocked? Had she been waiting for him at the border? If so, who betrayed him?

In his endless final moment, he guesses that she must have tracked him after Tashkurgan. He was probably watched in Urumqi. Perhaps he was chosen as a test subject for the virus. When it first yanked him from slow-thought into overclocked fever, he knew what was at work in his brain. For a baseline moment he was there with the doctors in the cell. He heard enough before they sank into slow motion. Then came three subjective weeks in a universe not much faster than the one he’s trapped in now. When Han insurgents overran the place—like a rumbling, inexorable storm front—he had ample time to wonder if they would kill him along with his captors.

The clocking malfunctions got more extreme as he returned south. He was trekking over moaning sands when days strobed by in seconds, bringing hunger and thirst like a knife in the gut. He emerged baseline on a straw pallet in a Silk Road Buddhist cave. The ancient walls danced with demons and saints as an old Han anthropologist nursed him back to health. The hermit and his heritage site had survived the Uyghur Dawn. Wang Zhe was grateful for the peeling, oxidized murals when the next overclocking hit: he lost himself in Sakyamuni’s Temptation for a subjective month.

When he emerged again, he confessed everything to the old man in a desperate rant.

An underclocking followed. Suddenly he was in the old man’s rickety ACV, hurtling south over the Taklamakan. Somehow sensing that Wang Zhe was baseline conscious, the old man explained, “We’re both Han, after all.”

Another underclocking zapped him into a flea-bitten room in an old Kashgar hostel. The place had once catered to laowai backpackers, and the walls were papered with old maps. Turn-of-the-millennium China was prominent, with its quaint autonomous regions and special economic zones.

The old man lay beside him on a dusty mattress. Breathing weakly, lips blood-flecked, he whispered, “Little brother, are you a Buddhist?”

“Some of us like to tailor our final moment. Optimize our eternity. I looked through the library here. A lot of old Lonely Planets, but no Bardo Thodol. Guess I’d need a lama anyway.” A coughing fit wracked him. Wang Zhe suspected the old man had spent the last of himself coming here. “Maybe you’ve read it?”

Wang Zhe knew of the text—Bardo Thodol, The Tibetan Book of the Dead, or Liberation through Hearing—but he hadn’t read it. The old man wanted guidance as he crossed over. “Sorry, uncle,” Wang Zhe answered. “Is there anything else I can do?”

“Tell me, do you really think this place can be China again?”

“It has strayed before,” Wang Zhe said, “and been brought back home.”

The old man smiled. He began to mutter snatches of the Bardo Thodol, playing lama for himself: “I have arrived at my time of death. By means of this death, I will adopt the characteristics of an enlightened mind. I will become compassionate. I will attain perfect enlightenment for the sake of all sentient beings.”

He barely whispered his last words: “The present moment is a Bardo, lying between my past and future selves. This Bardo is a chance to know true reality, which is also true self.”

In the Bardo of his final moment, Wang Zhe has repeated these words thousands of times. They have become a mantra. The unmoving raindrops have become prayer beads. Past and future have melted away. He has worn his memories out. They’ve been rewritten too many times.

He can only accept the street, the girl, the gun. In the end he can only become them.

When a syringe dart finally emerges from the pistol, crawling at a snail’s pace through the rain-studded air, Wang Zhe is incapable of surprise. He cannot hope it contains a vaccine.

Andy Dudak is a writer and translator of science fiction. His original stories have appeared in Analog, Apex, Clarkesworld, Daily Science Fiction, Interzone, The Magazine of Fantasy and Science Fiction, Rich Horton’s Year’s Best, and elsewhere. He’s translated many stories for Clarkesworld, and a novel by Liu Cixin, among other things. In his spare time he likes to binge-watch peak television and eat Hui Muslim style cold sesame noodles. 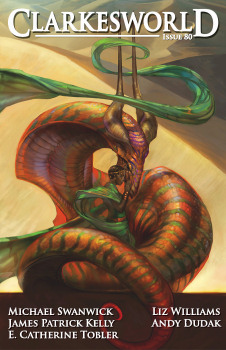