No End to the Madness: A Conversation with Artist Scott Eagle

Scott Eagle grew up in Winston-Salem, NC. He now lives in Greenville, NC and serves as the assistant director of the School of Art and Design at Eastern Carolina University. Eagle is a southerner. Yet, there is nothing overtly southern in his paintings.

Imagine Flannery O'Connor on LSD without the Catholicism but with all the mystery pulsating beneath the surface, and you might be getting close to a literary equivalent. Eagle's images are surely too hopeful to be considered Southern Gothic, too dark for sweat tea and cornbread. Even as atrocities visit the people in his paintings, there are flashes of light and joy.

Maybe if Erskine Caldwell had lived in Byzantine Empire, he'd have painted like this.

Eagle "believe[s] that art is the creative response to the demands and expectations of society. Great art is that which communicates the intangible aspect of being."

After browsing his online gallery, "intangible" proves synonymous with "mischievous".

Eagle has shown his work all over the country. His art has appeared in publications as varied as The Oxford American and The New York Times. He's done book jackets for Prime Books and PS Publishing, among others. To readers, Eagle is probably best known for the covers of books by Jeff VanderMeer, including City of Saints and Madmen, Secret Life, Why Should I Cut Your Throat?, The Situation, and Last Drink Bird Head. 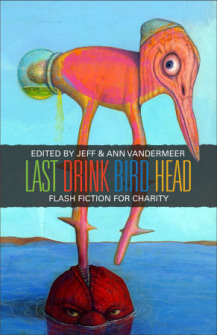 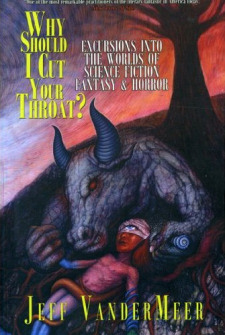 Eagle's blending of the raw and the refined — what Jeff VanderMeer calls "the primitive and the sophisticated" — makes Eagle's work hard to deny and renders it deviously complex.

In other words, you can look at one of Eagle's paintings, but you can't look away. Nor would you want to.

"I am drawn to Scott's work by a dual sense of play and of the mysterious," says Jeff VanderMeer on his blog. And that just about nails it.

Consider this statement from Eagle's webpage: "My words and thoughts are like a box full of puppies. While they are in my head they are easy to manage and relatively ordered. But as they spill playfully and enthusiastically out my mouth they go off in directions I had not intended or desired and quite often they grow up to be great big mean dogs that come back to bite me on the ass." 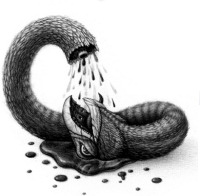 Now contrast that box full of puppies with what at first glance might be a beaked snake drinking blood from its own tail.

Scott Eagle's work disturbs me. Deeply. His paintings give me the willies. A giggle rises in the back of my throat and I see the world anew. It's the beauty of playfulness and mysteriousness that does it.

Below, Eagle and I took the opportunity to talk about painting and teaching a few weeks before he's scheduled to teach at Shared Worlds, the creative writing and world building camp for teenagers that Jeff VanderMeer and I run at Wofford College. 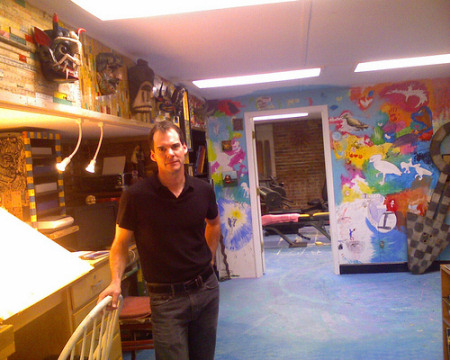 When did you start painting?

I cannot remember a time that I didn't draw, paint or create. Fortunately my parents encouraged me and had me take private lessons in addition to the public school art classes. I grew up in Winston- Salem, NC and was fortunate enough to be selected for their advance placement art classes at the Career Center, which allowed me to spend half of every school day in art class.

Is there a painting that you consider a landmark piece in your career? 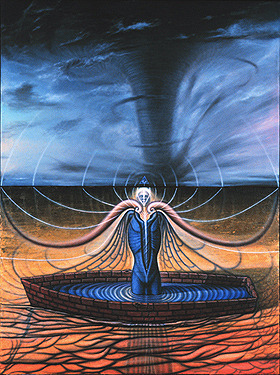 It may not be my best or most memorable image, but it represents a moment in my life when a lot of ideas crystallized (a hierophanic experience.)

What sorts of things do you paint? Or, put differently, what captures your imagination and spurs you to pick up a brush?

Because my creative work is a means for me to explore and express my reaction to, and interaction with my environment, I paint, draw, sculpt, etc whatever issue, idea, neurosis (I've got lots of them) is most pressing. That is why my work varies from 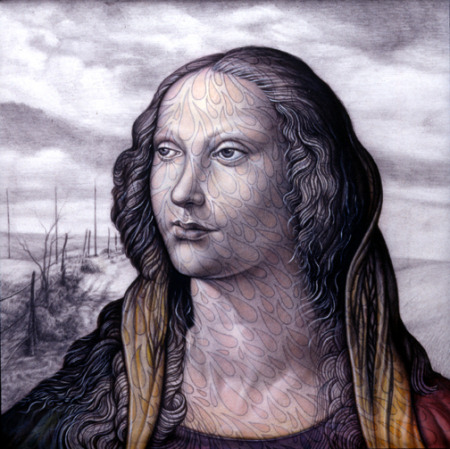 To an installation that includes a grenade.

Painting is more like eating. I have to do it. I am afraid to think what I might do if I didn't. 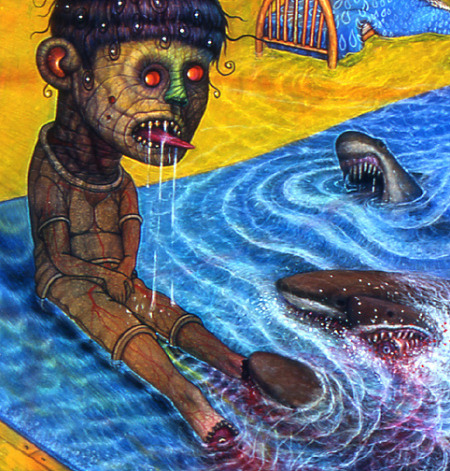 Where do you start a painting?

For that past several years, all of my work has started out on paper. I have several stacks of varying sizes that I take out from time to time and thoroughly abuse. I soak the paper in all sorts of nastiness, leave it on my studio floor, walk on it, drop things on it, just about everything that you are told not to do to a "work of art" I will do to that poor defenseless paper. What amazes me is that I have been abusing some of this paper for years and it has still not fallen apart.

At some point a particular piece of paper might begin to suggest an image, or it might achieve a patina that speaks to me so strongly that I pull it from the fray. From that moment on, it usually evolves slowly and carefully — if it is not aborted and thrown back into the mix. Some of my paintings have hundreds of hours of work invested by the time they are complete.

Which book cover is your favorite?

Secret Life was my favorite. 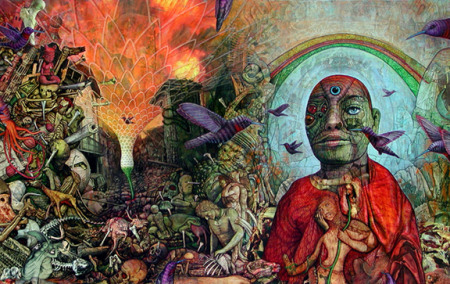 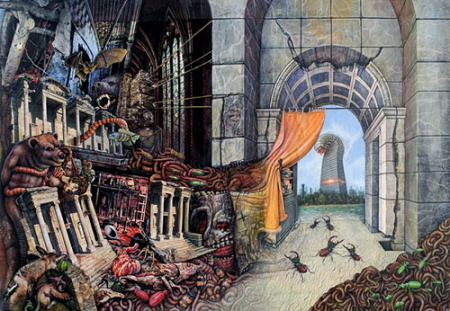 One that exceeded your expectations?

The City of Saints and Madmen: 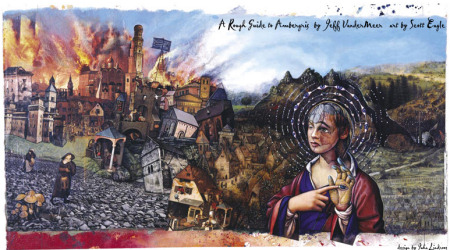 You often paint with your children. Do you like collaborating on paintings?

I am consistently inspired and impressed by my wife's, children's and student's creativity and abilities.

My collaborative work started with my children because I loved the way they drew. Like so many artists, I admired the way my children played with their drawings and paintings and did not worry about the way they looked. I knew that spontaneity would not last long and I wanted to take part in that moment. The self consciousness of becoming an adult is a powerful editor and the perception of what is acceptable in the teenage social arena is an oppressive censor.

As for my collaboration with students and other artists, that started several years ago when I was trying to get my students to take more dramatic chances with their work. At that time, I would give them parameters for an assignment and most of the students would work until they had one or two "precious" areas or spots on the canvas, but as a whole, the composition would be weak. They did not want to take a chance and mess up the parts that they were happy with.

My first stab at a solution was an assignment where the students were required to let their painting completely leave their control at some point during it's creation. They could decide how this occurred and when. Quite often the means was more interesting than the end. Some of the solutions to this problem were variations on games of chance like numbering tubes of paint 2-12 and rolling die 6 times, then using only the colors associated with the numbers rolled to create the painting. Another example was asking fellow students to write subjects, objects, events, animals, etc on small pieces of paper that were then put into a hat and drawn out by another student.

The most common solution was to allow someone else to paint on their painting. The thing that happened every time was that the student was shocked by what was done to his or her work. Another thing I realized was that the students were not willing to fully invest their efforts in a painting if they knew someone else might "ruin" it. Because painters work with tangible objects, the objects have a psychological value that is not easily thrown to the whims of someone that has no genuine motivation to collaborate in what could be perceived as an equal investment of time, ability and inspiration. There was also the occasional issue of varied or mismatched skill levels.

I addressed this problem by introducing a complex assignment where the subject for the painting was very limited and the students were asked to create large numbers of variations which were traded and reworked in a variety of scenarios until finally each student chose two or three works to finish without any further possibility of intrusion. I took part in the painting process as well, and traded my paintings for theirs.

During this assignment, I realized that if I allowed students to substitute prints or any type of copy of their "original artwork," I eliminated the possibility of loss of the tangible object as well as the fear associated with "messing up" the original.

This was the point that I began to ask students and colleagues to collaborate. I enjoy the new insights and awareness of other's points of view that collaboration fosters. But, it never ceases to amaze me how every time I collaborate with someone, I cannot anticipate what they are going to do, and I must regroup because my original plans won't work.

How do you go about critiquing student work?

We have all had the teacher that stands at the front of the class and talks for hours and expects everyone to regurgitate that knowledge. I believe in the Suzuki method of "immersion, encouragement, small steps, and an unforced timetable for learning material based on each person's developmental readiness to imitate examples, internalize principles, and contribute novel ideas."

I am first and foremost interested in a person's motivations, and whether the form is appropriate to the content / intent. For example, every semester I encourage at least one student in my painting class to do things other than paintings. The reason is that if the concept, issues or whatever is motivating a student might best be explored in another medium, or even another dimension, why should I force them to continue putting paint on canvas.

Almost every class, I talk to each student about what is going on with their work and, if they are open to it, we talk about their life. By the time we have a class critique, my students are thoroughly tired of hearing my opinions. Class critiques are a time for students to give their feedback about their peer's work. I use questions to guide the direction of the discussion but I do my best to keep my mouth shut and listen.

How do you keep yourself and your work creative and vital?

I am both lucky and cursed. I have way too many ideas, for the amount of time that I have to work on them. So, for now, I do not foresee any end to my madness. 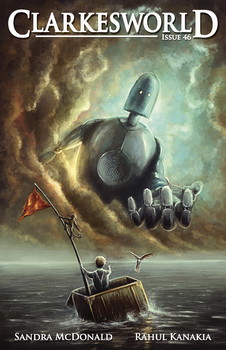