Cassandra steps onto the surface of the planet, her insulated boots making soft indentations in the dirt. The fan that keeps her spacesuit from overheating whirrs over the harsh cadence of her breath.

She doesn’t see the Archivists, but they are already documenting, building the record that will express this historical moment, a series of interlocking puzzle pieces filled with visual, empathetic, and sensory images.

Archivist Tan places an unformed puzzle piece in his gripping bones, channeling the emotions of Cassandra, who feels a sense of wonder and hope and fear. The puzzle piece melts, then reforms, shaped by Cassandra, although she does not know it.

Nine humans sit around a table bolted to the floor of their spaceship.

“We’re going to be rich,” says Josef, his gray hair gleaming in the artificial light. He has been on many survey missions, but never to a planet as plentiful as this one, with flowers that produce a nectar sweeter than sugar, with rivers of liquid gold.

Desire flows off the humans like oil, like the golden rivers with their hidden depths. Josef wants to take sanctuary in wealth, finding the safety he has been missing all his life. Cassandra wants to be famous for her discovery; the money will only be one facet of her greatness. Aviva wants to prove she is better than her siblings; any status symbol will do—prestige, money, scientific recognition. Some of the humans only want the money for the wanting of it, a desire inchoate and overpowering.

They still have not found the Archivists, but they have not looked very hard.

The human ship is descending quickly. Archivist Tan wonders what strange creatures will come this time, if their memories will be as virulent as those who have come before. He wonders what their feelings will taste like.

The prismatic puzzle glows in the sun’s weak light. Archivist Tan slots puzzle piece 12 into place, his memory of this landing, so that other generations can know what he knows.

Josef has been dead for two weeks. Archivist Tan can taste Cassandra’s grief, and it is tinged with some deeper bitterness, like a root left too long underground.

Josef hikes in the weed forest, where a bridge crosses a vast, golden river. Josef touches the interlayered braid of the bridge cable. He realizes it is a made thing.

Archivist Tan stands at the end of the bridge.

At the sight of the Archivist’s many bones, Josef loses his footing and almost falls into the liquid below, but catches himself. Archivist Tan can feel Josef’s fear and wonder.

Tan holds out a puzzle piece. It represents the first part of the humans’ journey, which Tan has documented fastidiously. Josef backs away. Seeing nowhere else to go, he jumps into the river, not hearing Tan’s warning. Fatal water.

The golden liquid eats through Josef’s spacesuit, down to his shining bones.

Josef’s bones, licked clean by the river, deposited at the spaceship hatch.

Is this the correct funerary rite? Archivist Tan doesn’t know. The humans have many conflicting memories.

Archivist Tan places his thoughts into the mutable, fragrant substance: Will future Archivists build this puzzle in a linear way, trying to reconstruct the shape of the past, or will they clasp the pieces that glow most strongly, scooping out singular moments from the flow of history? It is so easy for pieces to become lost, to disintegrate. What sort of history is a fragmented history?

Aviva has always been an explorer. Josef’s death does not stop her.

She climbs mountains with crystal adhesions. Walks the twenty-two kilometers of a valley bright with seafoam. She is the first to take off her suit and breathe the air, which tastes faintly of salt.

Archivist Tan wants to contact her, but she is immersed in the glory of her discoveries. Instead, he uses the mutable substance to capture her wonder and pride, her ambition and energy.

Cassandra takes a puzzle piece from Archivist Tan. She sees the Archivists in their long lines, worshiping order and chaos, eating the blue twisted stems that grow underneath the ground. She searches for the next piece to connect, and all over the planet, the Archivists feel a corresponding tremor, for they too love order and completion.

Cassandra is overcome with wonder and hope and a wide, unquenchable awe.

In this true moment of first meeting, Cassandra accepts what the Archivists have offered—a living piece of history, which will be transmuted in her hands, shaped by her choices, her thoughts, the wide possibilities of the future.

Archivist Tan gently takes the puzzle piece with his gripping bones. Together, they hold the fragrant substance between them, creating a fused memory of many parts.

Aviva runs in the seafoam valley, turning her anger into motion. She will not speak to the Archivists or grasp their gripping bones like Cassandra. Doesn’t Cassandra know that the Archivists are recording them? Can Aviva recuse herself from this historical record?

Cassandra frantically boots up the autopilot. Too late. She falls over the console, blood brimming from her ears, purple welts across her face.

Archivist Tan tempers his grief in silence, twisting it upon the forge of his mind to see how it will break.

He crushes a purple mushroom in his gripping bones. It is an irrational action. Archivist Tan crushes a field of mushrooms, stomping with his largest bones, although it hurts his cracked side.

The spores that settle on him will not hurt him. How long had those spores settled on the bodies of the humans, waiting to bloom?

Cassandra touches Tan’s gripping bones. They drink together from the same cup, for water is life for both peoples, despite their physiological differences. Tan communicates with Cassandra through the mutable substance of the puzzle. He thinks that she may stay.

His hope is like the rushing of a golden river, swift and powerful. Dangerous. Between their differences, they have found a space to exist together. They tell each other stories, sharing memories—her childhood on a farm stretched beneath a yellow sun; his first Archival Passage, where he rubbed the mutable substance all over his bones and did not disintegrate. Her mind contains a balance between order and chaos—he wishes his own thoughts could obtain this unsortable quality.

Purple mushrooms frame their camp. Now that the wet season has come, many varieties have sprouted from the dark dirt.

Cassandra picks a mushroom. Absently, she tosses it from hand to hand. Archivist Tan is amazed by her dexterity.

Through the mutable substance of the puzzle piece, he says to her, I am sorry.

What he is apologizing for, he does not know. Perhaps that he can know and taste and feel her emotions and the surface of her thoughts, which he knows disturbs her. He cannot turn off this sense, any more than she could stop feeling the wind on her skin. Perhaps he only wants her forgiveness for whatever is to come.

The past spools out behind them. The future is a long road they must walk.

Instead of forgiveness, she touches the bone that runs along his left side, with the crack down the middle. Tell me how this happened, she says, and so he describes the sinking valleys of Ivalthe and the three-toed beasts that roam there, and the journey he took when youth was fresh upon him and the world looked new.

A strange fungus has overtaken Aviva, working its way into the crevasses of her spacesuit. Purple welts form on her arms. Blood brims from her ears.

The humans are dead. Their ship sits like a toothless mouth, yawning open, crawling with fungal spores. An unintended monument.

The mutable substance holds their memories. Which amber thoughts will persist? Which will crumble? Who will read this fragmented history and know something of this past?

Archivist Tan makes a copy of the record, 1006 interlocking puzzle pieces, and sends it into space, following the trajectory the human ship made. The original is shelved in the underground archive of Balthanos, waiting for gripping bones. Or hands.

Archivist Tan thinks he will go again to the valleys of Ivalthe. There, he will bury the puzzle piece he has kept close. Not everything belongs in the historical record, to be scrutinized and examined. The past must keep some secrets.

It is only this: a ship in the sky, radiating hope, bringing the unknown future.

Beth Goder works as an archivist, processing the papers of economists, scientists, and other interesting folks. Her fiction has appeared in venues such as Escape Pod, Fireside, and Flash Fiction Online. 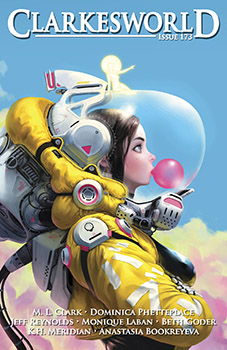