7th Sigma & the Gauzy Exterior: A Conversation with Steven Gould

Frontier survival, nano-technology, drug runners, crooked cops, spies, martial arts, Western landscapes, and a (somewhat) post-apocalyptic setting — Steven Gould's 7th Sigma has the savory ingredients of any number of genres and sub-genres. Yet this is no hodge-podge or mis-mash-up. It is a coming of age science fictional adventure about doing what's right regardless of personal cost.

Gould is the author of such novels as Wildside, Greenwar (with Laura J Mixon), Helm, Blind Waves, and the recent 7th Sigma. Perhaps, Gould is best known for the Jumper novels, which include Jumper, Reflex, and Jumper: Griffin's Story. Jumper was made into a successful motion picture in 2008 starring Hayden Christiansen and Samuel L. Jackson. Gould's stories, novelettes, and novels have been nominated multiple times for Hugo, Nebula, and Prometheus Awards, among others.

Born in Arizona, Gould moved around from military base to military base as a child, was educated in Texas, and now lives in New Mexico among the grand vistas and diverse cultures that enrich 7th Sigma with both a grand perspective and multiple (and very intimate) perspectives.

On his blog or in fiction, Gould has shown himself to be "always concerned when disparity in the availability of a technology makes an underclass." He is an active participant in Worldreader, an organization that, among other things, helps "to make digital books available to all in the developing world, enabling millions of people to improve their lives."

Gould has, to put it bluntly, a visceral dislike of social injustice, he is never shy to speak his mind and take a clear stance on gender, sexual orientation, race, religion, and economics. Yet, Gould is more likely to give us a character who struggles with these issues than to take the soap box. His novels are all the richer for it.

Below, Gould and I talk about 7th Sigma, martial arts, and the women who have guided him along the way. 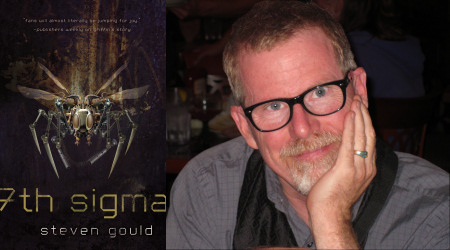 Where does a novel usually start for you—image, plot, character, historical event, somewhere else altogether? And how about 7th Sigma in particular?

Depends. Jumper is about an ability and finding the character who is both liberated and trapped by the ability. My book Wildside started with the hole to another earth, one that hadn't developed humans. And the character followed that, too. Helm was about a situation and not the one most people would think after reading the book. It's about a son banished by a father without explanation. Sure, it's set 267 light years away. So what. Ditto for Blind Waves—the event, followed by the characters in that event/environment. With 7th Sigma, the character and the environment came together.

7th Sigma owes its heart to Rudyard Kipling's Kim, a novel set in an environment where ancient cultures swirl around each other sometimes mixing, sometimes not, with technologies that run from bullock to Steam Trains with characters that are driven by the search for enlightenment, military intelligence, merriment, and base wealth. So, the hodgepodge of cultures, technologies, and motivations that exist in 7th Sigma are my attempt to match the amazing texture that is Kim's colonial India.

But I don't know India, so I had to create my own.

What is it about the landscape of New Mexico that captures (or sparks) your imagination?

Age. Cultures mixing and not mixing. Until 1908 the largest single structure in North America was a thousand year old structure called Pueblo Bonita in Chaco Canyon. The oldest continuously occupied city is in New Mexico, Acoma Pueblo. We have the oldest state capitol. Sure we weren't a state until 1912 but the capitol city was first occupied in 1608. New Mexico has the highest percentage of Hispanics and the second highest percentage of Native Americans (after Alaska.) We're the 6th least populated state and we have vistas. We have environments that range for blazing desert to alpine snow, prairie, mountains, badlands, massive lava flows. We are the site of the first Atomic Bomb explosion and we have a spaceport. Enough said.

The easy answer is that science fiction is what I read, what I imprinted on, but the more serious answer is that SF is the gauzy exterior that sucks in readers who, without realizing, are suddenly dealing with very serious issues. An escapist novel about a kid who can teleport (hijinks ensue) can deal with serious issues of child abuse, alcoholism, and terrorism. What's safer than a book that is clearly impossible. That deals with things you don't have to deal with in every day life? So you start a book set on a planet called Winter and suddenly you are dealing with issues of gender and sexual identity that are happening in our lives—that for some readers are life and death issues.

I'm not sure it has to be SF to show cultures both mixing and not mixing. I can look around my home city and see examples of insular extremists and tolerant mixed race/mixed culture families. Political and economic realities drive families half-way across the globe into settings foreign to them. Obviously you can see these things happening in SF and Fantasy, too, like Silverberg's Marjipoor tales. It is true that one of the favorite character roles in SF is the newcomer, the outsider who has to deal with an alien culture or setting and so has to have things explained to him (and hence the reader.)

There are parts of 7th Sigma that suggest you are a fan of Western films and books.

I admire books about frontiers. This includes Westerns but it also includes books like Heinlein's Red Planet and Farmer in the Sky. Kim is a book about frontiers because frontiers exist where one people enter an area that they don't know, even it if it is occupied by cultures that do know it.

Are there other ways that Heinlein's work influenced this book?

Heinlein's greatest gift (to me) is the seamless way he introduces technology, culture, and character into his works without stalling the narrative. It's the thing I admire most about his writing and the thing I most hope surfaces in my own writing. Hopefully that's happening in 7th Sigma, too.

The macro-structure of 7th Sigma... is it modular, episodic, what? How'd you come to this particular structure?

There are odd things about 7th Sigma. For example, when I originally started the book it began with the scene on page 235, after Kimble is seventeen. After starting there (and writing several chapters) I decided I really needed to fill in Kimble's background, so, when I started to fill this in, I did it in the form of chapters with their own little narrative arcs. Chapter two was added after all of this, when my editor pointed out that we really needed to see the bugs in action, the very real danger of the bugs, earlier in the story, so it served to illustrate that and give some of the history of the territory and some of the speculations about the bugs. And the last chapter was also added at her request, as it really ended too soon. This is not unusual for me. Instead of ending novels on a cliffhanger, I have a slight tendency to end of cliff notes instead, insufficiently dwelling on what happened.

In what ways, if any, are you like Kimble Monroe? Or are you more like another character in the novel?

I have been studying Aikido for the last sixteen and a half years. I did have an alcoholic father (who has been sober for over 30 years), so, sure, there are similarities there, but mostly it's Kim from Kim or Thorby from Citizen of the Galaxy or Tom Sawyer or any of the many coming of age protagonists I've loved over the years.

What has the study and practice of martial arts taught you about writing?

As I said. Sixteen years. I have been regularly teaching for over half of that. By the time this is published I will have been newly promoted to Yondan (4th Degree Black Belt). And it has taught me that most important things are achieved by just showing up over and over and over again. Practice is cumulative. Writing is cumulative. Writing is practice. The Japanese word for practice is Keiko. The way you improve is "keiko, keiko, keiko," just like the answer to the question: How do you get to Carnegie Hall.

How'd you build the character Sensei Ruth? She seems to live in a calm present with the constant pressure of a slowly leaked past.

I have had many instructors over the years and I'm grateful to all of them but I particularly appreciate some of the higher ranked women who have taught me more than just technique, like how to make the study of aikido a life affirming thing, part of one's everyday life. Also, I wanted a character that represented Kipling's Tibetan Monk who is seeking the River of the Arrow, who has left their previous life behind (in his case, powerful abbot of a large monastery). Ruth has left her previous life because of a divorce and is seeking a new one in the Territory.

Are there any "higher ranked" women writers who have taught you more than technique? If so, who? And what did they teach you?

Interestingly enough, the woman who guided me to Aikido is Michaela Roessner, author of Walkabout Woman, Vanishing Point, The Stars Dispose, and The Stars Compel (currently a 5th Degree Black Belt instructor in Aikido.) And the person who guided her to aikido was Elizabeth Lynn (Sixth Degree Black Belt) who, among other things, was one of my wife's writing instructors at Clarion classic back in '81 (and who just sent me an email saying kinds things about 7th Sigma.)

However, without a doubt people like Ursula LeGuin, Andre Norton, Ann McCaffrey were early influences. Sometimes that influence came from annoyance. I once threw an Andre Norton book across the room and started my first novel in reaction (however it became my third published novel, Helm.) Women who personally influenced me were Lisa Tuttle who was in Texas when I was first getting published. I've always admired the works of Lois McMaster Bujold, too, not just in her individual novels, but the way she has managed to build a lifetime story arc for Miles Vorkosigan over many novels. She convinced me that series writing doesn't have to be slight at all.

What have your daughters and/or being a father taught you about writing?

That I need to take nothing for granted. That I have things in my psyche that are firmly rooted in patriarchal assumptions and that I really need to think before I say anything about a woman's role or capabilities and that I need to do the same thing regarding race.

Oh, and the character Thayet... where did you ever find her?

Beats me. In other words—she came when she was needed. Or, perhaps, she is part of the answer to the question above.

I am in the final stages of writing Impulse, the sequel to Reflex and Jumper. It's about Davy and Millie's sixteen year-old daughter, Cent. (Short for Millicent.) Again, my own daughters probably have something to do with this.

Thanks for having me. Thanks to any of your readers who've bought my books. 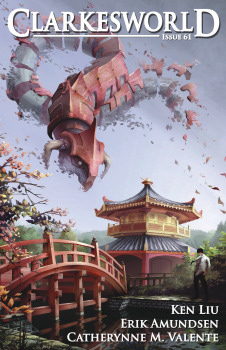