Born in Malaysia, Cassandra Khaw grew up watching horror movies with their parents, from John Carpenter’s The Thing to A Nightmare on Elm Street to Critters. When they got older, they got into Asian horror movies, such as Shutter and The Eye. Nonetheless, long before landing their first fiction sales, they were a tech and video game journalist. A hardcore geek at heart, they work full time now as lead writer for the North American edition of a game they still cannot talk about. They’ve written for venues such as Ars Technica, Engadget, Eurogamer, Gamasutra, and The Verge, and spent a decade traveling so often for work that they rarely spent more than a few months in any one continent. Games they contributed to include The Silence Under Your Bed, Sunless Skies, and Wasteland 3.

Khaw’s fiction career began with “Disconnect” at Vice’s tech site Motherboard in 2014. In 2015 they had a handful of pieces come out, including “What the Highway Prefers” at Lackington’s, “An Ocean of Eyes” in The Dark, and novella Rupert Wong, Cannibal Chef with Rebellion imprint Abaddon, which was part of their Gods and Monsters series. (Contrary to frequent misconceptions, the franchise began with Chuck Wendig’s Unclean Spirits.) Since then, they’ve seen fifty short stories published in various well-respected venues.

Cassandra Khaw is an award-winning game writer and multiple award-nominated fiction writer, with work spanning genres in multiple major venues, including Nature, The Magazine of Fantasy and Science Fiction, Tor.com, Apex, and more. They are one of the three authors for Walk Among Us, a Vampire: The Masquerade tie-in book, just out from Harper Voyager. The All-Consuming World is due from Erewhon Books in September of 2021 and Nothing But Blackened Teeth is due from Tor Nightfire in October of 2021.

In between all of that, they found time to learn Muay Thai, get into street dancing, write for D&D, World of Darkness, and Magic: The Gathering.

What was “breaking in” for you? How did it happen, and at what point did you feel like you were established?

Regular submissions to all the venues. Daily obsessive trips to The Submission Grinder, trying to figure out if the response times meant that my story was moving into the next round, etc. And honestly, it’s only lately that I’ve started feeling like my career is an established one, and that’s only because I have sold enough things that I’m now like, “Oh god. This book won’t be out until 2023. Okay.”

I think the biggest commonality between the three stories here is that they—at least to me, it may well be authorial hubris talking!—give the impression of being windows into larger, coherently designed worlds. And there is a definite loneliness to them too, a sense of the universe being far bigger than a single human heart can hold; that we’re here just for a second, just for a moment, and we’re dwarfed by existence itself.

In 2017 your poetry started coming out, beginning with “Protestations Against the Idea of Anglicization” in Uncanny Magazine. What is your relationship to poetry? Do you address similar concerns and themes through poetry as you do with prose?

It’s absolutely a newer form of expression, one that I’m still gingerly learning. Poetry is such a beautiful and complex beast to me. I’m in awe of people like my darling Ali Trotta, who can spin poetry like it’s the easiest thing in the world.

And I think so. Lately, I’ve been trying to figure out what my subconscious is working through in my creative work, and I’ve decided it has a lot to do with undoing a lot of generational trauma and indoctrination: the idea that good women are seen, not heard; good women work hard and don’t complain; good women give everything in hopes that the people who come up after them might have more, might have the opportunity to say what they feel, go for what they want.

A lot of my work, I think, screams at the idea of that silence, that sense of being restrained and small, of not asking too much, of being tidy.

What is your process like for writing poetry, especially compared to writing short fiction?

It involves significantly more angsting than my prose writing. Like I said earlier, I’m still trying to figure this out. I’m not really a poet; I don’t feel like one, at any rate. And I’m particularly aware of this when I try to write poetry.

I don’t read as much poetry as I should. But one of my favorite poets is Denice Frohman. Oh my god. Reading Frohman is what drove me into wanting to write poetry. Her poem, “Accents” is permanently burned into my brain. The rhythm of it, the easy glide, the way she makes the English language her dance partner but doesn’t allow it to determine her dance. Her poetry is stunning, both in terms of its craft and its subject matter.

On the speculative side, I love Ali Trotta’s work. I’ll preface this by saying that I might be biased because she’s like blood to me, my sister from another mother. But there’s such a goddamned grace to her poetry, a grasp of mythology that always awes me. Not in the sense that she’s well-read in the various mythologies of the world (although clearly she is), but in the way she builds myths from her poetry. It’s all great, great stuff.

I also absolutely love Lora Gray’s poetry, which is both so delicate and so brutal at the same time. If Ali’s poetry is brocade and the smell of temple incense, Lora Gray’s work is a polished knife that cuts deep into the heart. Every time I read one of their pieces, I inevitably find myself going, “Oh,” very softly in awe.

For folks who haven’t read your short fiction, if you wanted to point them to one story to get them started, what would it be, and why?

“You Do Nothing But Freefall,” from Lightspeed. It is probably the most approachable, language-wise. But I think it also gets across a lot of what defines my work: that desire for change, the melancholy, the mythological creatures seeking to escape the definitions they’ve been given.

Walk Among Us, a tie-in book for Vampire: The Masquerade, just came out, and it has your novella “Fine Print.” What do you really want readers to know, beyond the line of description on the publisher page?

Duke is 100 percent based on people I’ve met in the game industry: the overwhelming egotism seen in the upper management, the toxic techbro mentality. Don’t get me wrong. I do love working in the games industry. But there are absolutely people here who get away with being absolute jerks.

I wanted very much to see what’d happen if someone like that went up against the Ventrue Clan, especially if he thinks they present as lesser. Needless to say, it doesn’t go well.

You also have The All-Consuming World coming out with Erewhon in August, a science fiction novel with a dash of mystery, featuring a group of former criminals. What was the most challenging aspect of writing this book, and how did you get through that challenge?

The abuse-related stuff, honestly. No small amount of the book deals with the idea of codependency and sick systems, how abusers make use of your best traits to keep you in a stranglehold. It deals as well with how we lie to ourselves about these things, how we convince ourselves that everything is okay, that it’s all fine, that really, we do love the people who hurt us.

And getting through it was, well, part “this book is on contract and I absolutely have to deliver” and also, a desire to remind people that you don’t have to be meek or small to be abused. Some of the strongest people I know, people who have lived through amazing hardships, who are shockingly resilient, they’ve been subject to abuse too, have been manipulated and molded by it.

The little things that the Minds get up to. We don’t really see it much in the book because we’re focused on Plot Things, but the Minds, as a species, are just fascinated with the concept of having limitless time, limitless access to all the knowledge in the world, and limitless opportunity to express themselves. Away from the main events of the book, they’re writing poetry in infrared, coming up with dances in faster-than-light travel, building languages out of snippets of seventeenth century love letters. All kinds of things.

What do you love most about the characters in this book—what was your favorite thing about writing them?

Their love for each other. The Dirty Dozen, and their relationships, are least partially inspired by my own found family. There are a bunch of brilliant people who I treat as older siblings, or dote on like they’re my younger siblings. I love them without exemption. And there are pieces of them in the Dirty Dozen: their loyalty, their humor, their kindness, their love, their absolute goddamned fabulousness.

Home is where the heart is, right? Home is the thing we go to when we want to close our eyes, be vulnerable, take a breath, relax, be safe. Haunted house stories are creepy as heck as it upends that idea completely, shows how we aren’t necessarily safe at home. I think as well that haunted house stories are a dialogue with that part of us that is aware that home, sometimes, can be a prison, can be a place where Really Bad Things happen, and you can’t say anything because where would you go?

One of the things this book does is examine relationships, peeling back the skin to find the rot. What was the hardest thing about writing these characters?

Visiting the idea that friendships aren’t always healthy, that just because you’ve known someone for twenty years, it doesn’t mean that friendship is good for either of you. I think that the media has socialized us to believe that things need to last. If they don’t, they’re of no value. Which a) isn’t true and b) leads us to getting into situations where we tolerate people, where we smile, where we let things go, because hey, that person has been our friend forever.

What else are you working on that readers can look forward to?

A whole bunch of things. I have a duology with Richard Kadrey that’s coming up, a little novella that answers the “and then what happened” in one of my stories, and I’m pecking right now at what will likely be a novella involving the grown-up daughter of a pair of serial killers. 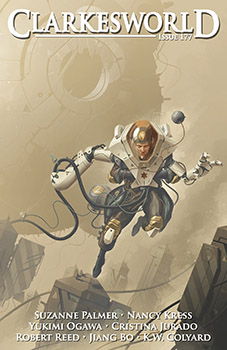