Refusing to Be the Same: An Interview with K.J. Bishop

K.J. Bishop’s first novel, The Etched City, was published by indie press Prime Books and then picked up by Bantam as well as Pan Macmillan, in addition to foreign language editions. It garnered excellent critical attention and was a finalist for the World Fantasy Award, in addition to winning the Crawford Award for best first novel. Bishop has also had stories in Leviathan 4, The New Weird, The Thackery T. Lambshead Pocket Guide to Eccentric & Discredited Diseases, and several other publications.

For those who aren’t familiar with Bishop’s fiction, she writes in a somewhat surrealist, almost Decadent vein, with The Etched City being a kind of dark urban fantasy. Her writing can be lush, but also sparse and minimalistic when she wants it to be. She, perhaps more than most others, strikes me as someone who could go in any direction as a writer.

Bishop and her husband currently live in Bangkok, Thailand, after moving from Australia. From Bangkok, she keeps up a lively and sometimes controversial blog (http://kjbishop.net/). Since The Etched City, Bishop has been splitting her time between a variety of different projects. Although a new novel may be a year or more in the offing, she is working on short fiction. I decided to check in on Bishop and find out what she’d been up to . . .

How did the publication of The Etched City change your life?

It made me decide to try to learn to be a writer. I didn’t have much of a literary vocation beforehand. I wrote the book without thinking of it as the beginning of anything. Afterwards, I wasn’t sure whether to continue with web design or do something else. The publication made me decide on the “something else,” which was writing. So it changed my direction. It brought me a whole lot of new friends and acquaintances. It also made me face and fight the people-pleasing side of myself.

Did your view of the novel change after the reviews and reader comments?

Not much. Reviews and comments were so diverse that if I’d listened to them all my views would have had to change in several contradictory directions. I took certain technical criticisms on board; that was about it.

If you had the whole experience to do over, is there anything you would have done differently?

Regarding the book, I’d have given more story to Raule. If I’d had my Bangkok experiences then, I could have added more detail to Ashamoil. In my general life, I might have decided much earlier to keep up a second job (I now teach English) rather than try to write full-time, which didn’t work for me.

Have you any contact to other writers in Bangkok? And have you been exposed to Pacific Rim or Southeast Asian writings/writers you weren’t aware of before?

I haven’t tried to meet other writers here. I have writer friends online, but in my real social life I like to get away from the writing world and hang out with people who do other things. There’s a sort of local genre about farang (foreign, white) men in Bangkok and their adventures with bargirls and hustlers and so forth, which I didn’t know about before. I’ve been getting into Japanese authors a bit more — but famous ones, like Mishima, Kobo Abe, Natsume Soseki. I have fuddy-duddy tastes, I guess.

Has the move from Australia to Bangkok had any effect on your writing—tone, subject matter, process?>

It’s starting to have an effect, mainly on subject matter. But since I came late to writing and have been trying out different things these past few years, I think it’s also just a natural process of change. The Iraq war has probably had an equal effect. I’ve become more interested in morality, justice, kindness — the person who is trying to be good, and the difficulty of doing the right thing, or even working out what the right thing is.

You’ve worked on and off on different follow-up novels to The Etched City. What are you currently working on?

I’m superstitious about talking about long-term projects. There’s a fantasy novel, a collaborative novel/non-novel, and a couple of stories. I’m getting closer to enough material for a story collection. I can talk about one of the stories, which, as you know, since you inspired it, is about a giant mouseman slogging through a post-apocalyptic world. For the past year I’ve also been writing a ridiculous doujinshi, based on The Etched City, which I post on my blog. It was sparked by a reader’s remark that the book was “surprisingly heteronormative” for a decadent-influenced work, and snowballed from there.

How difficult is writing, for you? Do you get joy out of the act of writing itself?

Writing is easy. Writing well is a bit harder. I’m not good with plot, and I doubt I ever will be. I like to write in different styles. Some are easier for me than others. I love it when the surrealist muse strikes and I can just sit back and channel something bizarre. But there’s also pleasure in consciously crafting normal sentences and paragraphs. I nearly always get pleasure out of writing. What I hate is looking back over it and realising that what I’ve written is awful.

What’s your dream project? Something you’ve had in mind for a long time but it’s just not ready to be brought out into the world yet?

I would love to do a graphic novel, but my art skills aren’t good enough. I’m giving myself a few years to improve. If I just can’t get there, I’ll look for an artist to work with. I also have a mainstream novel that I keep trying to write. I think I’ve stacked up about 500,000 words of horrible writing. I’ll probably still be fiddling around with it when I’m 90. I want to resurrect Patrick White and get him to write it, so maybe at some point I’ll give up writing and turn to necromancy.

Tell me about the Mouse Man. What is he all about? Is he happy or not so much? Does he know how to dance? Does he know what dancing is?

The Mouse Man (ha, I just typoed “Muse Man”) is all about keeping him and his hairless long-nosed gopher-thing son alive from one day to the next. He isn’t happy. I’d say he’s traumatised and possibly insane. He was once human, before reality broke. Yeah, he does know how to dance. In fact, I’m just rewriting a bit where the addition of some dancing would be perfect. Thanks for the serendipity! He’s in my head. I love him. When I love a character, I become that character’s slave. I have to do things their way.

Finally, are you a New Weird writer, or just an amiable eccentric who happens to indulge in Lautreaumont from time to time?

Tee hee, the latter. Maldoror is an astral virus that infected me years ago. Now I have chronic Maldoritis. Or Mal de Writers. 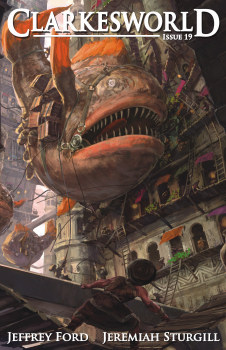