Jules Verne and a Journey Through Genre

The term “romance” as describing a literary genre has a long history. Today, it’s applied to fictional stories that center on romantic love (as in “romance novel”). However, initially, a “romance” was a piece of fiction that included adventure and chivalry, with attention to the psychology of the characters. This naming tradition began during the 1100s and essentially continued through the Victorian era, with less focus on chivalry and more on imagination. Some of these romances included futuristic or fantastical elements, including Francis Bacon’s New Atlantis (1627), and Margaret Cavendish’s The Blazing World (1666). Later examples of romance include the works of Sir Walter Scott, who defined the romance as “a fictitious narrative in prose or verse; the interest of which turns upon marvelous and uncommon incidents.”

The first science fiction novel in the modern sense was Frankenstein, by Mary Shelley, published in 1818 and in a revised form in 1831. At the time, the book was classified as a romance (specifically, a Gothic romance). In Frankenstein, Shelley expresses concern about what happens when science is used unethically and what happens when one person is in control of a scientific development that gives them unchecked power.

In 1844, Robert Chambers published a book of speculative natural history. Critics called it a “scientific romance.” It was not a compliment, but the term gradually became used for fiction with a scientific angle, written by authors including Jules Verne, H. G. Wells, Sir Arthur Conan Doyle, and Edgar Rice Burroughs. The classification was still in occasional use through the 1940s, although it was gradually replaced by the term “science fiction,” coined in 1926 by Hugo Gernsback. Scientific romances had an emphasis on science as well as the discussion of social ideas, such as imperialism, evolution, and both the adventurous and cerebral aspects of exploration. Above all, it had a tone—a fascination with science matched only by a thirst for adventure and for marvels both actual and fictional.

Jules Verne was born in 1828, in Nantes, France. Nantes includes artificial islands in the Loire River, and Verne grew up on one of them, reading books about castaways and longing to be a sailor. Verne left Nantes for Paris in 1848. He wasted no time in meeting prominent authors, including his hero, Victor Hugo, as well as Alexandre Dumas. Verne became fast friends with Dumas’ son, known as Alexandre Dumas, fils, and they collaborated together on plays.

In 1862, Verne met Pierre-Jules Hetzel. Hetzel became Verne’s publisher, and remained his publisher for the rest of Verne’s life. Hetzel committed Verne to a contract that promised a steady salary in exchange for three volumes a year. Initially the relationship was a friendly one, but the two battled over many core aspects of Twenty Thousand Leagues Under the Seas.

It was Hetzel who commissioned Verne to write The Voyages Extraordinaires, which eventually resulted in fifty-four books, including fiction and nonfiction, that shared a common goal. According to Hertzel, the goal of the series was:

. . . to outline all the geographical, geological, physical, and astronomical knowledge amassed by modern science and to recount, in an entertaining and picturesque format . . . the history of the universe.

The most famous titles today from the series are Twenty Thousand Leagues Under the Seas, Journey to the Center of the Earth, Around the World in Eighty Days, Around the Moon, and The Mysterious Island.

Twenty Thousand Leagues Under the Seas was published serially and then as a book in 1871. It is about the Nautilus, a submarine famously captained by the mysterious Captain Nemo. The narrator, Professor Aronnax, his servant, Conseil, and a harpooner named Ned Land become the prisoners of Captain Nemo after the Nautilus strikes their ship. While Professor Arronax enjoys being able to pursue his life’s work of studying sea life from the windows of the submarine, Ned longs for freedom. Along with the crew of the Nautilus, they fight sharks and giant squids. Meanwhile, Nemo pursues vengeance against all humankind for an unspecified wrong.

Modern readers may picture the Nautilus as a futuristic device, but for the most part it was not. Not only were real submarines in existence when Verne wrote the book, there was even a real submarine called The Nautilus. The main technological marvel of The Nautilus is that it runs on electricity. However, this technology was already under development, and the real-life 1885 submarine, Goubet I, ran on electricity as well.

Verne spends a great amount of time explaining the technology of the Nautilus, but tellingly, he seems more interested in the journey taken—one which “outline[s] all the geographical, geological, physical . . . knowledge amassed by modern science” that Verne can possibly cram in. The tech makes the journey possible and the characters keep it entertaining and emotionally haunting. Still, an awful lot of the book consists of lists of fish species. As Verne said about another of his books, Five Weeks in a Balloon, “I wrote Five Weeks in a Balloon not as a story about ballooning, but as a story about Africa.” In the same way, Twenty Thousand Leagues Under the Seas is not a story about a submarine, but about the ocean.

However, there are some truly visionary elements in Twenty Thousand Leagues Under the Seas, including the size, strength, and diving capacity of the Nautilus (not to mention the interior decorating!), the discovery of Atlantis, and the journey to the South Pole. Mary Shelley is lauded as the mother of science fiction, and Jules Verne and H. G. Wells are lauded as the genre’s fathers, with Verne winning his place largely on the basis of this book. Even though the point of Twenty Thousand Leagues Under the Seas is the journey, not the tech, Verne is still fascinated by how the tech works. In fact, Verne appears in this novel to be fascinated by EVERYTHING.

It’s this sense of fascination, wonder, and curiosity that truly makes Verne a father to science fiction, more so than any specific futuristic quality of his work. Verne loves to tell us how things work, what things look like, how things taste and smell and feel. He explores the undersea world in the same manner that one might explore another planet, setting the stage for many literary voyages to come. He also uses technology to tell a story about people and society. The events on board the Nautilus serve as metaphors and illustrations of alienation, vengeance, loyalty, freedom and imprisonment, and the thin line between freedom fighter and terrorist. The Nautilus is both admirable and ominous, as it can further exploration or be a terrifying weapon, depending on the whim of its captain. The dangerous science theme ties this book to its predecessor, Frankenstein. The focus on exploration ties it to later stories like The Time Machine by H. G. Wells. There is a direct line from the Nautilus to the Enterprise.

It can be deflating to the modern reader to realize how many of Verne’s works either had no futuristic technology or had very little. It’s also frustrating to see an author who during his life was lauded as a serious writer confined in the United States to horrible translations located in the children’s section—not because this book can’t be enjoyed by children, but because with the improved translations that exist today, it can be enjoyed by everyone.

Some of Verne’s books have no science fiction aspects at all, in the sense that they are either nonfiction or they only use technology and science that was well-known at the time that he wrote. For instance, Around the World in Eighty Days is a book that explored the technology of Verne’s day with no futuristic advances. Others, including Twenty Thousand Leagues Under the Seas and Around the Moon, contain enough speculation to be at least arguably science fiction. All of his books share more than enough fascination with science and an abundance of imagination to serve as examples of scientific romance. By centering wonder, exploration, and social themes in a story made possible by slightly imagined technological advances, Verne ignited the imagination of future authors who took the idea of imagined technological advances further while continuing to explore natural and social phenomena through science fiction.

I am indebted to William Butcher’s biography of Jules Verne (Jules Verne: The Definitive Biography) and his introduction, notes, and translation of Twenty Thousand Leagues under the Seas, published by Oxford University Press, 2009.

Carrie Sessarego is the resident “geek reviewer” for Smart Bitches, Trashy Books, where she wrangles science fiction, fantasy romance, comics, movies, and non-fiction. Carrie’s first book, Pride, Prejudice, and Popcorn: TV and Film Adaptations of Pride and Prejudice, Wuthering Heights, and Jane Eyre, was released in 2014. Her work has been published in Interfictions Online, Pop Matters: After the Avengers, The WisCon Chronicles Vol. 9, Invisible 3, Clarkesworld Magazine, and two volumes of Speculative Fiction: The Year’s Best Online Reviews, Essays and Commentary. She spends her time wrangling her husband, daughter, dog, and three cats. 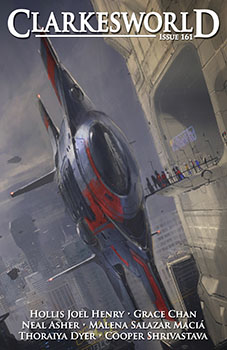