Each Facet Intensely: A Conversation with Angela Slatter

Australian fiction writer Angela Slatter has two beautiful story collections out, Sourdough & Other Stories (Tartarus Press [UK]) and The Girl with No Hands & Other Tales (Ticonderoga Publications). They are beautiful inside and out — both the stories that make up the books and the books themselves.

Slatter's stories are startling and exuberant and they will remind you why the short story form is so powerful.

"Angela Slatter writes fiction like an artist turned poet," said Ann VanderMeer, editor-in-chief of Weird Tales. "Her stories are lyrical and, more important, vividly human. The brilliantly drawn images in her first collection will deliver a satisfying shock of recognition to any reader."

Slatter's stories posses a primal magic. They make you hold your breath. They stop your heart. And they open moments wide enough to fill whole worlds.

"[I write about] fairytales and fear — and sometimes overcoming the odds ... in fairytales," said Angela Slatter. "I enjoy writing about really engaging characters — who are terribly flawed but still bring the reader along with them. I do like fairytale themes as my jumping off point because they're so universal; they're what we hear in the cradle."

Below, Slatter and I talk about the short story form, ebooks, and learning patience. 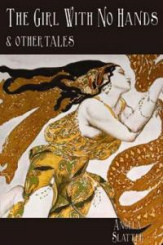 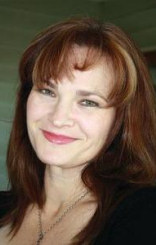 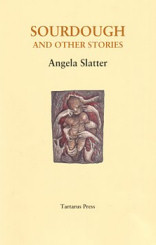 I had a lot of chats with Sean Williams about this at Clarion South last year over chocolate frogs and herbal tea ... a short story should show a slice of life at a particular moment — a reader is sucked in and then thrown out again, with head spinning — a bit like a trip with a malfunctioning vortex manipulator. It's holding a gem up to the light and looking at only one facet really intensely. Whereas the novel needs lots of nice workmanlike narrative prose to move the story along — the river of brown — and float your golden boats of highlight moments on, a short story needs to be all gold. A reader shouldn't feel that any word is out of place or wasted. It should also (in my opinion) leave a reader feeling that there's other stuff that's gone on that they haven't been told ... that there's another story, an "under-story" that still remains hidden. It's about a subtle layering that leaves a sense of unease even after a satisfactory conclusion. Finally for me, a short story should be about the three C's: crisis, choice, and consequence.

What comes first — character, setting, plot, image, sight, sound, or something else?

It really depends. One of the stories in the Sourdough collection, "Sister, Sister" has a couple of sparks: one is a book of Norwegian folktales that belonged to my Mum about trolls and changeling babies; the other is from reading in Miéville's Perdido Street Station a description of a pub Isaac goes into and thinking "There should be a crèche in there". Another story, in the Sprawl anthology, called "Brisneyland By Night" came from an INXS song that contains the line "I'll make wine from your tears." Or I might have a character popping up and demanding attention: Patience Sykes in "Gallowberries" is such a one (also in the Sourdough collection). Yes, it's a strange place in my head.

Is there a landmark story in your career?

Argh! That's really hard: it could be the first story I sold — which was to Lady Churchill's Rosebud Wristlet ("The Juniper Tree"), because it was such a lovely high profile market and I thought "Hey, maybe I can write." Or maybe "The Jacaranda Wife," which was for the Dreaming Again anthology that Jack Dann edited, because it was my first really big sale and my first Australian sale. Or maybe it was Sourdough because it started the cycle of stories that ultimately became the Sourdough & Other Stories collection. Too hard to choose!

Which stories in Sourdough & Other Stories and The Girl with No Hands & Other Tales gave you the most trouble? And did any of them come easily?

With Sourdough & Other Stories, Gallowberries took four years to write. "Lost Things" didn't fall into place until I'd worked out how to connect it with "Ash" and "The Story of Ink". And "A Porcelain Soul" made me seriously grumpy until a chat with Alison Goodman about reverse engineering for writers made me look really closely at what a secondary character wanted and then I was able to pull everything together at last.

The Girl with No Hands ... was a bit different because most of those tales are early work and I love the collection as a map of my journey as a writer. I suppose the hardest ones were "The Jacaranda Wife" and "Dresses, three" because they were both written with some pressure - the first one because Jack had liked but refused my first sub for Dreaming Again and asked "Do you have anything else?"And when Jack says that, you damn well write something! And the second one because it was written for an Art-themed issue for Shimmer and I wanted to do justice to Chrissy Ellsworth's gorgeous artwork! A lot of sweat went into those stories.

Were you pleased with how Sourdough Dough & Other Stories turned out? A special edition like this really reminds me how great a book as an object can be.

I think it's glorious — I never thought I would have a book like that! It makes me feel so humble and grateful to be with a publisher like Tartarus for my first ever book because they love the book as an artifact and a thing of beauty as well as a means of transmitting the stories. I have also been very, very fortunate in that I have two short story collections out this year, The Girl with No Hands and Other Tales is also beautiful and comes in a paper back and a limited edition hardcover version too. Russell at Ticonderoga also shares the same aesthetic sense of how lovely a book can be!

Any thoughts on ebooks?

Ebooks ... keep in mind that I am a Luddite and well, it doesn't feel the same as curling up with a nice book that smells like ink and paper. It doesn't feel right to me and the glow hurts my eyes still. I think of them as expensive coasters. But I also know that they're a great new income stream for writers and we need to know how to leverage the potential for multi-platform storytelling and reading — the book is also now a tool for social networking, which it was before in its old form with book clubs — now it has the potential for an online book club with many, many, many members.

But still, they don't look as nice as a hardcover book. And if I drop my book on my head when I fall asleep at night, it may hurt but it won't cost a packet unlike the ebook reader that will surely not bounce very well and need to be replaced.

How are the novels coming? What do you prefer about the longer form? The shorter form?

The novels are slow, because I am also working on a PhD and working part-time to make ends meet. I like the shorter form because it can be quicker to finish and I generally know how I want it to end and I can imagine its shape. Novels take a lot more perseverance and it's just a new form for me. I feel at this point that I'm kind of transitioning ... but I need to learn to be patient and learn.

Finishing the first book of the duopoly, Well of Souls ... then the second book, Gate of the Dead ... and I would really like to do another collection of stories in the Sourdough universe, because I still have more of those stories buzzing around in my head ... I want to examine what happens to Selke, and Patience and Theodora and I want to write more about Rilka. 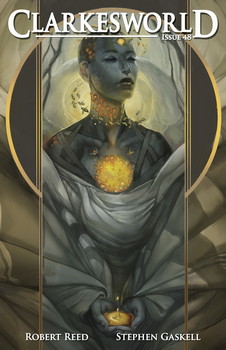