Magician Spies and Wacky Rubbish: A Conversation with Bruce Sterling

Authors are eclectic collectors. They gather various interests, knowledge of dubious use, and esoteric hobbies that they then synthesize into a mad scientist brew of characters and story. Sprinkle in a bit of history, lesser known facts, and a dash of fantastical engineering and you may have the newest novel by Bruce Sterling.

Pirate Utopia is a wild dieselpunk tale featuring famous historical faces in the time just after World War I. Lorenzo Secondary is a veteran, brilliant engineer, and leader of warrior-pirates from the Regency of Carnaro whose mission is to fight communists, capitalists, and even fascists. Featuring a poet, Milanese aristocrat, spymaster, and a torpedo manufacturer, Pirate Utopia is a witty adventure through an alternate Adriatic region. 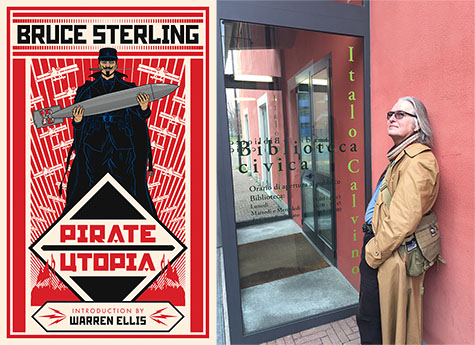 Being the Chairman of Cyberpunk, what do you think of virtual reality tech becoming widely accessible to consumers?

I’ll be pretty impressed if consumers buy VR tech. I’ve seen thirty long years of VR techies assembling their headsets and then trying to get normal people to purchase and use those. Google Glass couldn’t manage that feat, and Glass was a light, unobtrusive device with a zillion Google bucks behind it.

Us science fiction writers do love Virtual Reality, but we tend to love lots of wacky rubbish with no market potential.

Besides VR, is there any new technology that you’re keenly interested in?

Yeah, I like 3D printers. I also like drones, cloud robots, and Internet-of-thing gizmos. But the technologies of real consequence are not the shiny new ones. They’re huge, old, well-financed, installed-base, planet-scale monsters that are no longer glamorous.

Pirate Utopia takes place in a past slightly different from our own. Why did you pick the time period after WWI to play with?

I like writing alternate history that’s set in authentic places. Rijeka, Croatia, for instance, and the period of 1919-1920 was one time when that small town was of world-scale consequence.

Here’s a video where I’m explaining some of this, in Rijeka, to people living in Rijeka. Of course, these modern people are surprised my odd historic interest. But Rijeka mattered a whole lot to world civilization, once. That obscure and sexy little beach town was the sandbox for Fascism.

Your new novel features an incredible cast of characters, including some real people from history. What made you choose to make Houdini a secret agent?

Well, Houdini really was a secret agent. You could read about that in the recent book The Secret Life of Houdini by William Kalush and Larry Sloman.

There wasn’t much of an American espionage community back in Houdini’s day, mostly just gentleman amateurs from Yale and Harvard. They were star-struck by Houdini. The spies enjoyed having Houdini around, briefing them about deception tricks and secret smuggling gadgets.

The modern American spy biz would probably enjoy Houdini just as much. Houdini was a great entertainer.

What does your writing process look like? Do you start with a concept or a character?

I tend to start with some dramatic human situation that I myself don’t understand. Like: What gives with that? What would happen if? What if the driving force that seems important isn’t the crucial element? It’s an analytical process.

But I’m not a sociologist or historian. I’m an entertainer. So, I’m looking for something that can catch a reader’s attention.

It’s speculation, it’s not a normal literary writing process, with characters, plot, denouement, theme, all that good stuff. Frankly, it’s rather like the antics of right-wing political analysts who riff to the public on talk radio. A whole lot of contemporary politics has a strong sci-fi tinge nowadays. That’s a theme of Pirate Utopia: the allure of visionary politics made from poetic rants.

You’ve often talked about how history has influenced your view of the future. Do you find history cyclical, repeating itself with various permutations?

History doesn’t mechanically coil around in spirals, corkscrewing into time ahead. Time is not a machine, but I struggle with my different intuitions about it. I know that Time and History are two different things. “History” means written records. Our authentic relation to time isn’t about our words. It’s about us as time-bound beings in a space-time continuum.

Lovecraft, who features in Pirate Utopia, liked to scare people with his “Great Old Ones” and their terrifying vistas of unthinkable eons. I admire Lovecraft and his artistry, but I don’t feel that time should intrinsically scare us.

We should enjoy thinking outside the narrow box of written history. We should have a healthier cultural sensibility about the vistas of past and future, and try to feel more at home in the scope of space-time. We should use our imagination to transcend the brevity of our lives.

It’s easy to use the standard rhetoric of science fiction to make something like the Andromeda Galaxy seem wondrous, fantastic, shocking, amazing—because it’s colossal in size, it’s two and a half million light-years away, it wheels around cyclically, and all that. I know how to write like that, but I’ve come to distrust that old-fashioned sci-fi attitude.

Our culture would probably improve if we were on better emotional terms with galaxies. Maybe if we admitted that galaxies were pretty, like snowflakes; that even though they’re bigger than us, older than us, and very far away, we have a deep commonality with them. There are millions of galaxies, and we live in one. There should be something brave and cheerful in knowing that.

How do you think your time in Europe has influenced your writing?

I suspect that the biggest change there is ahead of me. I arrived in Europe in my 50s, so I was already an older guy, pretty set in my ways. I was wandering among the Europeans, and interested in them and their doings, but I was never European, or aspiring to become like them.

Nowadays, though, I know some Europeans that I can understand. A few are writers, like me, but mostly they are European tech, design, and new-media people. They’re my cultural peer-group in Europe. I take people in the Euro tech-art scene with utter seriousness. I learn a lot from them.

You’ve been doing a lot of work in Italy. What have you been up to in Turin?

My friends and I built a local “house of the future,” an experimental domestic technology space, in a half-empty Turinese factory. “Casa Jasmina,” they call it. (casajasmina.arduino.cc)

I’m the “Curator of Casa Jasmina.” I didn’t build that house with the crowbars and jackhammers and laser-cutters. Mostly my role there means that the library in Casa Jasmina is a rather special place. Casa Jasmina is an intellectual clubhouse for tech-culture activities that could probably only happen in Torino.

I think this is good for me. Back when I was a young, cyberpunk, American science fiction writer, I promised myself that I would never be some dull know-it-all who writes the same trilogy series over and over. I had to pull some freaky lateral moves to evade that common fate, but, well, I did that. So, I’m still an older guy, and even rather calm and stodgy in some ways, but man, living in Turin among artsy hackers, that really breaks up the tedium. I learn something new every day around here.

You have a fascination with various dead technologies like phenakistoscopes and stereopticons. What is it about forgotten tech that interests you?

Well, that’s what our own tech is. It’s the same basic material as stereopticons, just a matter of time.

What is your favorite Bollywood film?

Bollywood is a huge cinema industry. It’s over a hundred years old. It’s not reasonable to pick just one favorite out of all those cinema genres and regions. That industry’s best days are ahead of it.

With that necessarily said, though: Jodhaa Akbar. No question it’s my favorite. Indians never liked that movie much. It’s a gaudy, lopsided historical epic that’s a real mess as cinema entertainment. But what a seething ode to the scope and variety of life.

I won’t claim that I have “watched” Jodhaa Akbar fifty times. But I’m sure there’s been fifty times when I just left that thing running, in all its gorgeous, magic-carpet epic-ness, in some screen in the corner of the room. No movie in the world ever made me happier. It’s more than a marvel; really, it’s a comfort. 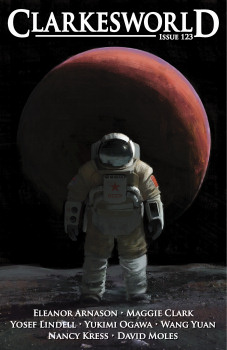