You may not have noticed, but the short fiction editors in this field are quite friendly to one another. It strikes some as odd that we can be on such collegial terms with our peers at competing magazines and anthologies, but the very things that drew us to this field draw us to one another. We talk, we share, and most of all, we want each other—and by extension, the field—to do well.

One of the editors I enjoy having the opportunity to talk with is Jonathan Strahan, a winner of the World Fantasy Award (Special Award—Professional) and a finalist for the Hugo Award for Best Editor (Short Form) nine times since 2008. Jonathan is the Reviews Editor at Locus Magazine, co-host and founder (with Gary K. Wolfe) of The Coode Street Podcast, a 2019 Clarion West Writers Workshop instructor, a former publisher, as well as an editor at Tor.com and of over forty anthologies, the most recent of which is Mission Critical (Rebellion Publishing, July 2019). 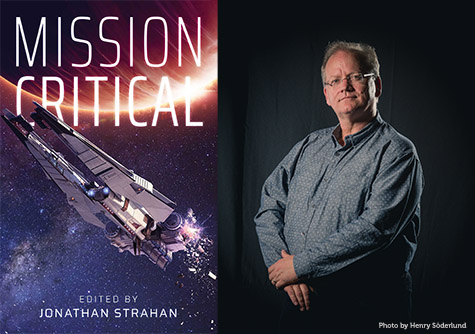 Every anthology seems to have an origin story. What’s the seed that started Mission Critical?

Origins can be impressive, seminal to the context of the story, and they can be less than that, a little ordinary. The original story for Mission Critical lies somewhere in between. Several years ago, I was at the movies with my family watching Matt Damon sciencing-the-shit-out-of-it in The Martian. While the story struck me as kinda silly in some places, the driving narrative force of it did not. That push to survive, to think your way out of the problem you face, is integral to science fiction, and the thought stuck with me. Then, about eighteen months or so ago my editor at Solaris asked for some ideas, and I mentioned this one. A book of stories, like The Martian, that would be about the moment when things went wrong, when the mission went critical. He loved it and here we are.

Is there a story in the anthology that best represents the vision you had in your mind when you conceived of this project?

I think the opening story, Greg Egan’s “This is Not the Way Home” really does nail what I had in mind. There’s convincing science, compelling human conflict, and the overwhelming feeling that things have gone wrong and may never be right again. That said, I hate playing favorites. I love a bunch of the stories. I could as easily have picked Kris Rusch’s or Peter Watts’ or . . .

Based on their story in the anthology, which author would you most like by your side in a mission critical scenario?

Peter Watts. Every single day of the week. That guy is scary smart and if anyone is going to be herding the cockroaches at the end times it’ll be him. He’s also incredibly decent, so he might keep me alive and not throw me to the cockroaches, even when that looks like the sanest course of action.

Is there any chance that this anthology will lead to another series or are you looking forward to doing more stand-alone projects for now?

I would love it if that happened. I have a follow-up in mind that I think would be enormous fun, but Mission Critical needs to have some time out in the world before we make that decision. So not in the immediate short term, but maybe in a year or two if people like this one enough. And yeah, I’m always working on some stand-alones. I have a couple in the works right now.

What’s your process for selecting stories or authors for your original anthologies?

Like you, I edit a best of the year anthology series and am constantly looking for new writers and stories to make sure I provide the best coverage of the field that I can and to make sure I have as good a feel for what’s happening as possible. I’m constantly making notes, keeping track of writers, and when an author writes something that gets my attention I try to find a way to work with them if possible. When I start putting a new project together I start with the idea, the concept, and then I invite people who I think could provide a fresh and exciting perspective, while also working with some of my favorites. I wish I had the resources to do open call projects, but that’s just not practical.

How does an author get on your radar for these projects?

Write and publish. That’s really about it. If you’re getting work out there, I’m doing everything I can to see it.

I’m ooooooold now, Neil. I’ve been doing this since 1990 and what excites me the most is when someone new comes into the field or when someone does something brilliant and unexpected. I’m deeply excited by the way science fiction seems to be responding to the challenges of the 21st century. We’re seeing more and more stories that confront climate change, that look to deal with prejudice in its many forms. But, more than anything, it’s the (still too slow) adding of new perspectives or focusing on too-long-overlooked ones that is the most exciting thing in SF right now. We’re seeing incredible work from China, India, Korea, Singapore, Bangladesh, and many other places which simply would not have gotten attention a decade ago, and we’re seeing more and more people of color, more LGBTQI+ people, and more physically diverse writers and story protagonists than ever before. That’s really exciting and keeps me reading.

Do you have any worries or concerns?

I love short fiction and I’m worried about its future. It needs to be on a sounder business footing. I think that would benefit everyone. I’d like to see writers’ payments grow and I’d like to see everyone in the editorial and publishing process getting paid fairly. I’m not sure those things will happen, but they need to. I am also concerned that readers are being funneled into only reading in one part of the field or another, to read print and not digital and so on. I’d like to see that addressed, or at least acknowledged.

Was there a 2018 story last year that you think the various awards missed? What made it so unique?

I remain genuinely surprised that S. Qiouyi Lu’s powerful and moving story, “Mother Tongues,” from the January 2018 Asimov’s wasn’t on every awards ballot it could possibly have appeared on. It’s a really interesting meditation on family and sacrifice that I thought would have devastated everyone as much as it did me. Winning awards is an alchemical process and I’m not saying anything that was on the various ballots didn’t deserve to be there, but “Mother Tongues” is a highlight story of the decade and should have been more widely recognized.

The latest of your Coode Street projects is the podcast you host with Gary K. Wolfe. What inspired you to start a podcast?

I loved a British music podcast, Word Podcast, and tried without luck to get Charles Brown to replicate it for Locus. Back around 2007-8 that seemed like a really good idea. When Charles died in 2009, Gary Wolfe and I started talking about all sorts of things, and eventually science fiction became the main topic of conversation. We tried a sample recording that just made our private conversations public, and 350 episodes later we’re still doing it. It’s mostly unplanned, sometimes unlistenable, but hopefully has some interesting stuff about the past, present, and future of the field for everyone. The episodes we recorded with Ursula K. Le Guin and with Gardner Dozois and Jack Dann are among my favorites, there are some great memories there.

I understand that you’re currently at Clarion. What’s the one thing you hope your students will walk away with after this experience?

Writing is hard and writing advice doesn’t suit or fit everyone. I don’t believe in models for structuring stories, rules, or right ways to do things when you’re writing. That means I’m more interested in helping writers develop strategies to confront the challenges they’ll encounter when writing, than in necessarily giving them solutions to specific problems. I hope the students Jack Dann and I will see at Clarion West will walk away with some advice that might apply to their work, but more than anything, with a clearer awareness of what they want to achieve as writers and a tool kit of techniques and approaches that will allow them to problem solve for themselves in the coming years. That, and a sense of community with their fellow students and the rest of SF.

What anthologies do you have coming in the next year and how are they coming along?

I have a major new fantasy anthology coming out next year. I can’t say too much yet, but it’s huge. I also have a new book coming from Solaris, Made to Order: Robots and Revolution, that should be out in October 2020 and is coming together nicely. And I’m also reading for my brand new Year’s Best Science Fiction for Saga Press. The Year’s Best Science Fiction 2020: The Saga Annual Anthology of SF should be out in July. Busy times!!