Freedom Over Tyranny: A Conversation with Harry Turtledove

Harry Turtledove first published as Eric Iverson, after being told that people would think “Turtledove” wasn’t his real name. Sword and sorcery adventure novels Wereblood and Werenight came out in 1979 with Belmont Tower. Del Rey/Ballantine published The Misplaced Legion in 1987 (wherein Romans are transported to another universe), beginning the Videssos cycle in the Turtledove name. By this time, he had more than a dozen short stories published as Iverson, appearing in respected venues such as Terry Carr’s Universe 10 anthology and Isaac Asimov’s Science Fiction Magazine. He had also started to garner nods, placing in Analog Readers polls and the Locus Awards.

To call Harry Turtledove “prolific” would be an understatement. His ISFDB page is crammed with novels, short fiction, and more, speaking to a long career of continuous publishing—and this should not be seen as comprehensive. The Harry Turtledove site, maintained by Steven H Silver, is a mass of categories offering even more titles. Dubbed the “Master of Alternate History” by Publishers Weekly, Turtledove was inspired to study Byzantine history after reading L. Sprague de Camp’s 1941 novel Lest Darkness Fall.

Turtledove ultimately earned a PhD in Byzantine history from UCLA in 1977. Notable works include 1987’s Agent of Byzantium; 1992’s The Guns of the South and 1997’s How Few Remain (both about the US Civil War); 1994’s In the Balance, beginning his series about World War II interrupted by aliens; 2002’s Ruled Britannia about Britain, but conquered by the Spanish Armada; and 2003’s Gunpowder Empire, beginning the Crosstime Traffic series, with time-traveling teens and Romans inventing gunpowder.

Throughout his career, Turtledove has been up for numerous awards. He received the Forry Award for Lifetime Achievement in Science Fiction in 1995, and he is a Golden Duck, Prometheus, Sidewise, Dragon, and Hugo award winner. His newest book is collection The Best of Harry Turtledove, due this month from Subterranean Press. 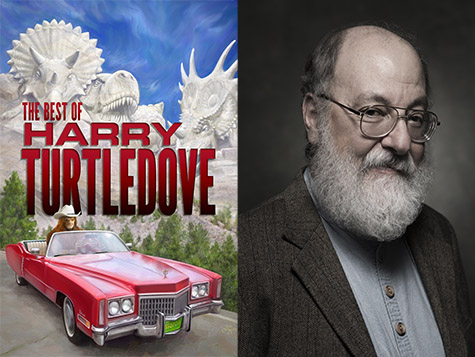 Your first novel, Wereblood, came out in 1979, and then you had The Misplaced Legion and Agent of Byzantium in 1987. Were there other projects you tried to sell that didn’t make it? How did breaking in happen for you?

I sold Werenight and Wereblood in 1978. They weren’t actually my first sale. I sold a novelette, “Death in Vesunna” (cowritten with my then-wife) to David Hartwell at Cosmos in 1977, but the magazine died before the story saw print (we did get a check). I spent 1979–83 writing The Misplaced Legion and the other three books of The Videssos cycle. Lester and Judy-Lynn del Rey bought them in 1985. I did the rewrites for them, and they started coming out in 1987, as you say. I was also writing short fiction after finishing the Videssos books; some of that became Agent of Byzantium, while some became A Different Flesh.

When and how did you begin to get involved in the SFF community? Did you find it helpful for your career or your writing process in any way?

I went to my first con in 1976. I started going seriously in 1984, after I was beginning to sell short fiction fairly regularly. Meeting the people you’re trying to sell to is useful, yes. I suppose the same applies to getting yourself known to the community.

When did you start to really feel established in the industry, what did it take, and what was the road like getting there?

I first started feeling like a pro in early 1984. The lady I’ve been married to since 1980 was pregnant with our first child. We needed to buy something, and the checkbook was light, as checkbooks have a way of being. I told her, “We’ll do it as soon as I sell another story.” She gave me the look wives give you when you say something really dumb, but a week or two later I sold something to Analog and we used the money to get whatever it was we needed. That was when I started counting on what I earned writing rather than treating it as found money. I quit my tech-writing day job in 1991, after I sold The Guns of the South. I might have done it sooner, but we had three little kids by then, and I was scared. I’ve been lucky enough to make it work.

You’ve been publishing consistently for a long time. Has your craft or your approach to writing changed much over the years—if readers pick up a copy of Opening Atlantis (2007) or “The Eyes of Argos” (1986) will they find a similar voice and style to Alpha and Omega (2019) and Salamis (2020)?

I think I do the same kinds of things I did when I was starting out. A lot of the questions I asked then still interest me. I like to think I do them better now; I know more about my craft than I did half a lifetime ago.

You have a staggering amount of work out. Did you ever hit a slump where you struggled to sell work or to produce work?

I don’t write nearly as much as I did when I was in my forties and fifties (I’m seventy-one now). This is partly because my children are grown and the house is paid for, partly because I’m generally less energetic than I was then.

In a recent interview, when asked about lessons readers should take from your work, you said, “Entertainment comes first.” Are there also themes and ideas in your fiction that stand out as more important to you, or about which you feel passionate?

You have recent titles out with major publishers, such as 2019’s Alpha and Omega with Del Rey, as well as indie presses, such as Caezik and Prince of Cats. Are there projects you were especially happy with, which you felt warranted far more fanfare than they received?

Like any writer, I think all my projects warranted far more fanfare than they got. They should all have sold ten billion copies; dramas faithfully based on them should be ratings smashes and watched around the world; and I should have a swimming pool the size of Lake Superior full of one hundred dollar bills. Obviously.

Your collection with Subterranean Press, The Best of Harry Turtledove, is due out in April. How did the collection come about?

My agent told me Subterranean was interested in doing the collection and asked me whether I wanted to. I said, “Sure!” Not very dramatic, but that’s how it worked.

Is there an organizational principle at work behind what pieces are in the collection? Do you see it as thematic?

The kind folks at Subterranean and I worked together on deciding what went in. As you’ve noted, I’ve been doing this for a long time now. About sixty percent of the collection is made up of some of my better-known pieces reaching back as far as the 1980s. The other forty percent is newer, uncollected work, much of which first appeared on the Tor.com website. I’ve also chosen to highlight a couple of worlds I’ve developed in the past few years: one with stories centering on Bill Williamson, the sasquatch governor of the state of Jefferson in the late 1970s and early 1980s; the other in a world where the Chicxulub meteor strike didn’t happen and dinosaurs evolved intelligence. (These two worlds prompted the cover illustration.)

Looking at the pieces in the collection, which stories are you are most proud of and why? What are they about?

As with characters, I don’t think of stories in these terms. I do them as best I can and hope other people like them well enough to pay me for them and to enjoy reading them.

Are there any stories that you weren’t sure fit quite as well; or perhaps stories that were a bit different than usual for you?

My principal frustration was that I had only about one hundred and eighty thousand words to play with. I could easily have made the book twice that size. The folks at Subterranean wouldn’t have been nearly so kind if I had, though.

What else are you working on now, and what do you have coming up that you can tell us about?

I have sold a novel called Three Miles Down to Tor. Given what the coronavirus is doing to the world and to publishing, it will probably come out in 2022. It’s set in 1974–75. You probably know about the K-129, the sub the Russians lost in the North Pacific in 1968, and about Project Azorian, the CIA’s effort to recover it. In the world I’m writing about, the US sub that finds the lost K-129 on the seafloor also finds, quite close to it, the alien spaceship that seems to have sunk it. Complications ensue. And I’m working on some other stuff. I have slowed down a bit, but I haven’t stopped. 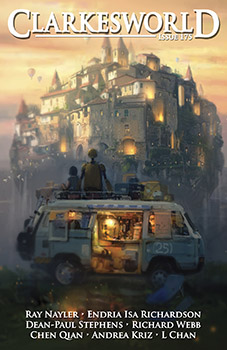